Home / Reviews / Doctor Strange in the Multiverse of Madness

Doctor Strange in the Multiverse of Madness (2022) Review

Doctor Strange in the Multiverse of Madness' plot and script start out strong but become overburdened with details. 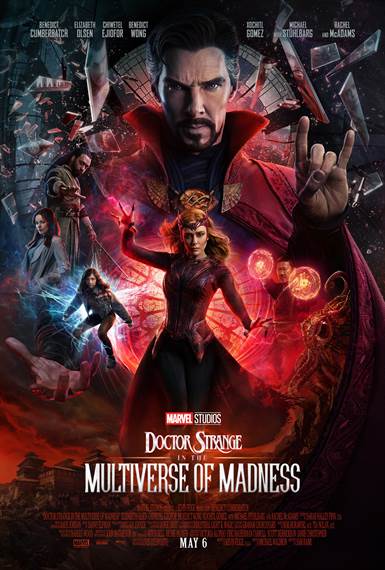 The Marvel Cinematic Universe, or MCU for short, offered movie-going audiences their first film in May of 2008.  Iron Man not only resurrected Robert Downey, Jr's (Sherlock Holmes) career, but it also introduced generations of people to a plethora of comic book superheroes.  Almost fifteen years later, we are in the middle of "phase four" in the franchise with the twenty-eighth movie to be released this week.  Doctor Strange in the Multiverse of Madness, reunites audiences with the title character, played by Benedict Cumberbatch (The Imitation Game), Wanda Maximoff (Elizabeth Olsen; Wind River), Christine Palmer (Rachel McAdams; Mean Girls) Wong (Benedict Wong; Annihilation) and introduces us to America Chavez (Xochitl Gomez; The Babysitter's Club).

In last year's Blockbuster, Spider-Man: No Way Home, Peter Parker/Spider-Man (Tom Holland; Uncharted) asked Doctor Stephen Strange to reverse time and wipe out any memory anyone has of Peter being Spider-Man.  While Wong warns Strange not to do it, he does it anyway and inadvertently opens portals to other universes, allowing superheroes and villains to enter, their universe. While ultimately getting everyone back to their own "home", Strange set in motion a set of alternate realities in the Multiverse.

Jump to the present and Strange is having nightmares about trying to save a teenage girl from demons who are trying to take her power. Imagine his surprise when that same teen, America Chavez, shows up in his world and he saves her from yet another monster.  After explaining the multiverse to Strange and Wong, Strange goes to visit Wanda Maximoff to ask for her help.  However, when she slips up, Strange realizes Wanda is the demon attempting to absorb America's power, and he and America must try to elude Wanda by slipping into various other universes.

Once again Cumberbatch expertly portrays the doctor with confidence and arrogance and the script allows him and Wong moments to add some comedic relief to the movie.  Olsen revives her role as the Scarlett Witch while portraying herself in various stages of motherhood.  She convincingly conveys a range of emotions from sadness to anger to despair.  Gomez rounds out this cast nicely and she has a good rapport and banter with Cumberbatch.

The plot and script start out strong but become overburdened with details.  The film has various ups and downs and the lulls between the action sequences and the dialogue make the movie seem longer than it's just over two-hour run time. Sam Raimi (The Evil Dead) directs this somewhat odd entry into the MCU franchise and does a good job for the most part but, as I mentioned, the film is rather uneven and the plot veers off in a number of different directions making it confusing at times.  The sense of flow gets interrupted on more than one occasion which can be jarring and distracting.

The special effects, including any number of monsters/demons following America throughout the movie, are somewhat bizarre and it is readily apparent they were created through CGI. The details are sharp but, having seen 15 minutes of the movie the week before in Dolby Vision (at CinemaCon 2022) there is easy to see the difference in quality.  I recommend paying a little extra to watch it in IMAX.

When I originally saw the trailer for Doctor Strange in the Multiverse of Madness I wasn't all that excited to see the movie.  However, after the 20-minute sneak peek we were treated to last week in Las Vegas I became skeptically optimistic.  Having now seen the whole film, my first impression was correct (I'm sorry to say). Even some terrific cameos can't save this movie and, though it says Doctor Strange will return,  I'm not sure that is necessarily a good thing.

Purchase a DVD/Blu-ray/4K UHD physical copy of Doctor Strange in the Multiverse of Madness today at Amazon.com

Download Doctor Strange in the Multiverse of Madness in Digital HD/4K from the iTunes store.

Listen to the Doctor Strange in the Multiverse of Madness soundtrack on Apple Music.

For more information about Doctor Strange in the Multiverse of Madness visit the FlickDirect Movie Database. For more reviews by Allison Rose please click here.

Doctor Strange in the Multiverse of Madness images are © Walt Disney Pictures. All Rights Reserved.