Cameron was right to wait so long to release this second Avatar film, until the technology had time to advance enough to properly portray his vision. 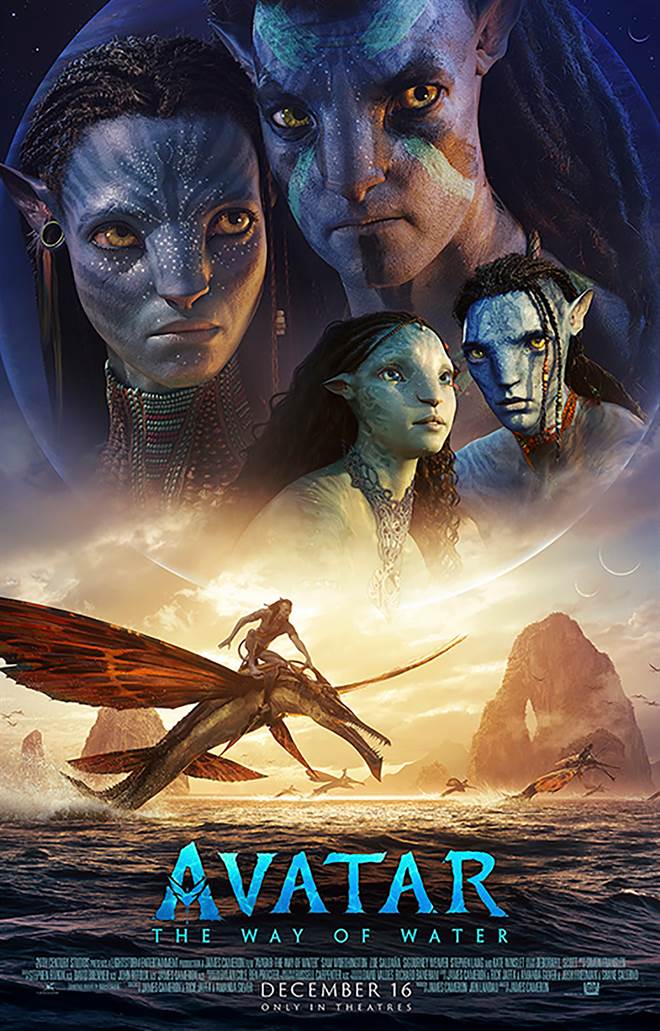 More than a dozen years ago the world was introduced to James Cameron's epic, sci-fi saga, Avatar.  His two-hour and forty-five-minute film took audiences to another planet, called Pandora, where the Na'vi tribe lives. From beautiful and colorful vistas to the spiritual creatures that call it home, Avatar was something moviegoers had never seen before. Because of the success of the film, Cameron announced he would make a sequel, if not an entire franchise. Fans, who have eagerly waited for the long-promised sequel to arrive will finally have their wishes granted when Avatar: The Way of Water opens worldwide on December 16, 2022.

After the Na'vi forcibly removed the Humans from Pandora, they rebuild their homes and thrive once more.  Jakes Sully (Sam Worthington; Terminator Salvation) has permanently transformed into his avatar, become chief of the tribe, and has four children with his love, Neytiri (Zoe Saldaña; Guardians of the Galaxy).  However, when the humans return to Pandora, this time armed with Avatars of their own, the Na'vi are once again threatened.

Making matters worse, the thoughts of Colonel Quaritch (Stephen Lang; Tombstone) have been transferred into an Avatar and his first act is to seek revenge on Sully and Neytiri.  Fearing for the safety of his family and the tribe, Sully relinquishes his status as chief and takes his family to the part of Pandora where the water people live and asks them for protection.

Worthington and Saldana reprise their roles and both actors do an excellent job of portraying these 10 feet tall creatures. Sigourney Weaver (Alien) returns but not as Grace.  Instead, Grace has been somehow transformed into an avatar that is held in a sleeping chamber while her "daughter" lives with Sully and his family. Lang (sort of) reprises his role as Colonel Quaritch and he is probably meaner than in the first Avatar if that is even possible. New cast members include Cliff Curtis (Training Day) as Tonowari, leader of the reef people, Kate Winslet (Titanic) as a free diver, and Tonowari's wife, Ronal. Along with the younger actors who portray Sully and Neytiri's children, they add a new layer and dimension to the story that began back in 2009.

Cameron was right to wait so long to release this second film until the technology had time to advance enough to properly portray his vision.  The 3-D aspect is incredible but often feels as if one is playing a video game.  It's that "just sort of off" feeling but not enough to make the viewer (player) annoyed.  The underwater scenes simply could not have been done quite so well ten years ago.  Cameron's other downfall is editing.  He seems to be such a fan of his own work that he finds it difficult to remove anything, hence the over three-hour running time.  He needs to let others view his vision and make suggestions for cuts because, unlike another lengthy, superhero saga, Avatar: The Way of Water feels long.

There is no doubt James Cameron is a brilliant filmmaker and after the success of the original Avatar, I'm sure Twentieth Century Studios is banking on similar box office returns and I think they won't be disappointed.  The film is too long, there are too many subplots swirling around the main story and a character named Spider (Jack Champion; The Night Sitter) is incredibly annoying.

With some additional editing, Avatar: The Way of Water could have been a masterpiece and even though that didn't happen it is still an excellent and entertaining film.  Fans won't be disappointed and Cameron may just make fans of a younger audience.

For more information about Avatar: The Way of Water visit the FlickDirect Movie Database. For more reviews by Allison Rose please click here.

Avatar: The Way of Water images are © 20th Century Studios. All Rights Reserved.