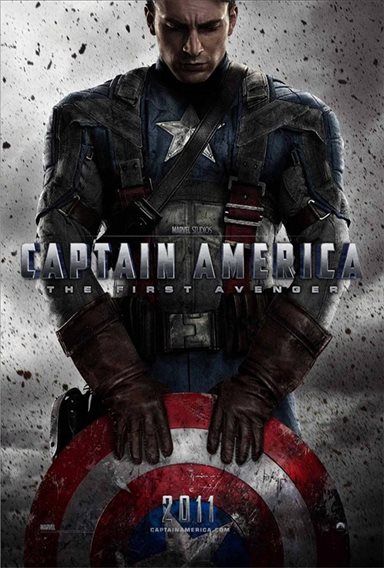 Purchase  DVD/Blu-ray/4K UHD
So Captain America has finally arrived with all the red, white, and blue, or should I say black and blue.  This is the story of a puny outcast and how he becomes the hero of America, although at first he is treated as a side show attraction.  It is very interesting how the Director accomplished this -- as most movie superhero films usually show how wonderful being a superhero is, the Director showed us that it is not always a wonderful thing.  This formula makes the audience both fall in love with and identify with Captain America early on in the picture.  I found myself asking why he isn't in the fight yet, which is what the character was asking as well -- clever, very clever.
Chris Evans gives a very masculine performance, which I have to say, is surprising since most of his past movies have been the cute boy sex symbol.  Chris brings justice to the role of Captain America with the help of his supporting cast.  I must say, I expected Captain America to follow the path of many of the comic-to-movie films; however, this was not one of those kinds of movies.  It was not comic book cheese -- instead it did justice to the Captain America comic book.
Chris Evans plays the superhero Captain America, but what Chris and the Director do with this comic hero was unexpected.  They actually give him a personality, a heart, and a character that we can identify with…Bravo to them and thank you so much for redeeming the comic book to film idea.  The movie also stirs American Patriotism in the audience, and the Director carries it through the movie.  Sometimes I could here the rumblings in the audience for that cheer of USA, USA.
I do have to add that the females in the audience that I was with swooned when Chris was released from the transformation chamber.  You could hear the female gasps in the audience; I heard guys behind me say the dude really bulked up for this, which is a change for Chris Evans from his usual shirtless performances that he is known for.
The supporting cast was what you expect from a supporting cast in this type of movie, and not one character stood out, except Colonel Chester Phillips, played by Tommy Lee Jones, who had some quirky lines throughout the movie.
The 3d was spectacular, and this is a must see in 3d IMAX because the 3d effects are amazing.  There was one part where he throws his shield, and I closed my eyes and fell back into my seat to avoid the shield.  Man, what was I doing?  It wasn't as if I was going to get hit by it.
There were some parts that were lulls in the movie, but they were short; the only other criticism I had was that when it ended -- or what the audience thought was the end as they started to clap, when the black screen suddenly comes back, and we are in the present day.  I am intrigued to see how they will be able to bring the Captain America franchise to the present day as like Wonder Woman it has always been set during WW II.
This aside, the red, white, and blue are back; and I am proud to have served.

Download Captain America: The First Avenger in Digital HD/4K from the iTunes store.

Listen to the Captain America: The First Avenger soundtrack on Apple Music.

Mr. Rogalski has a varied background in the Entertainment industry; his peers elected him as the Amusement Associations State Representative in Florida. He was the highest-ranking official representing the amusement and entertainment industry in Florida. While State Representative he spearheaded initiatives, which included passing local ordinances governing the incensing and permitting of travelling amusements. Read more reviews and content by Craig Rogalski.