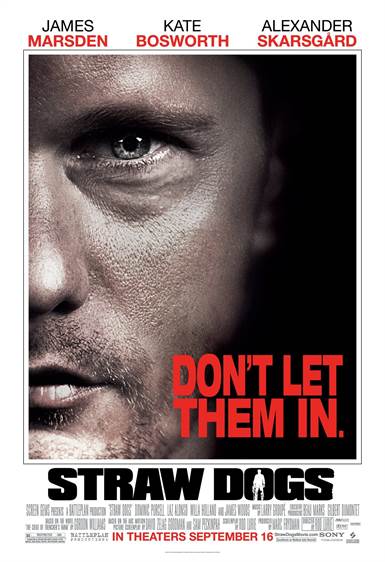 Purchase   DVD/Blu-ray/4K UHD
Here's a remake that actually makes for better entertainment.  It's called Straw Dogs and the cunning little tale takes you into the dark side of a dysfunctional town and renders fear.   I was very much blown away by the film from its mellow beginning to a buildup of concern and a final turn of events that made me shudder.  If you like films that have a deep seeded alarming undertone then rush to see Straw Dogs.

Television screenwriter David Summer (James Marsden) and his new wife Amy (Kate Bosworth) travel to her hometown in rural Mississippi to stay at her inherited house where her husband plans to write his new script.  Although the house is welcoming, the dysfunctional town doesn't seem to be as friendly as Amy left it when she graduated high school.  Some of the discontented remnants of her past still linger especially Charlie (Alexander Skarsgard) an old high school flame who did a hitch in the Army.  When tensions start to build due to a deep seeded lust that Charlie has for Amy a bitter conflict starts leading to violence.

Director Rod Lurie begins his film with a whimsical drive to the southern backcountry setting up a nice dynamic between the couple yet starts to instill injections of dread.  He builds the fear factor with voyeuristic glances by Charlie who becomes obsessed with connecting with Amy again.  The conflict continues throughout the film setting up a cringing attack that Lurie photographs up close adding to the brutality of the movie.

Filming the movie in the off the beaten path rural town with accompanying woods would be no easy task but it's handled well under the guidance of Lurie (The Last Castle) who directs his camera crew to film the dark misty woods, beaten down town bars and brutal scenes.  The strength of any terror flick comes in how you show the conflict and Lurie does a very good job with the fear factor.

The acting here by Bosworth, Marsden and Skarsgard are admirable, but the real standout performance comes from James Woods as the long hardened ex-high school coach that fears for his teenage daughter in a side story that becomes the catalyst for the violent ending.  Woods has aged well yet a little unrecognizable at first due to weight gain, but as you get to know his character he uses his rugged looks to instill the cruel personality of the coach and drunken rages that cause him to get out of control.  I liked his character and the importance he gives to showing the dysfunction of the people in the town.

The setback for this film comes with the word remake.  Straw Dogs was made in 1971 and although the setting in the New England small town was far from Southern Mississippi, the violence and panic are much the same.  Dustin Hoffman played the David role with Sam Peckinpah (The Killer Elite) directing his thriller that included much of the same suspense, revenge and retribution.  It's very hard to follow Peckinpah for the ferocity he lends to his films, but I believe Lurie put forth a very good effort.

Straw Dogs is rated R for strong brutal violence including a sexual attack, menace, some sexual content, and pervasive language.  The violence scenes are very horrific and include a rape that gets frightening.

Download Straw Dogs in Digital HD/4K from the iTunes store. 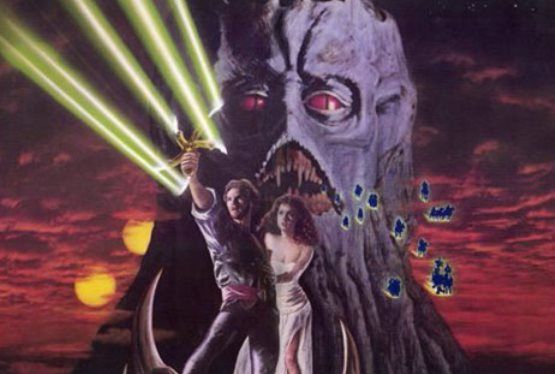