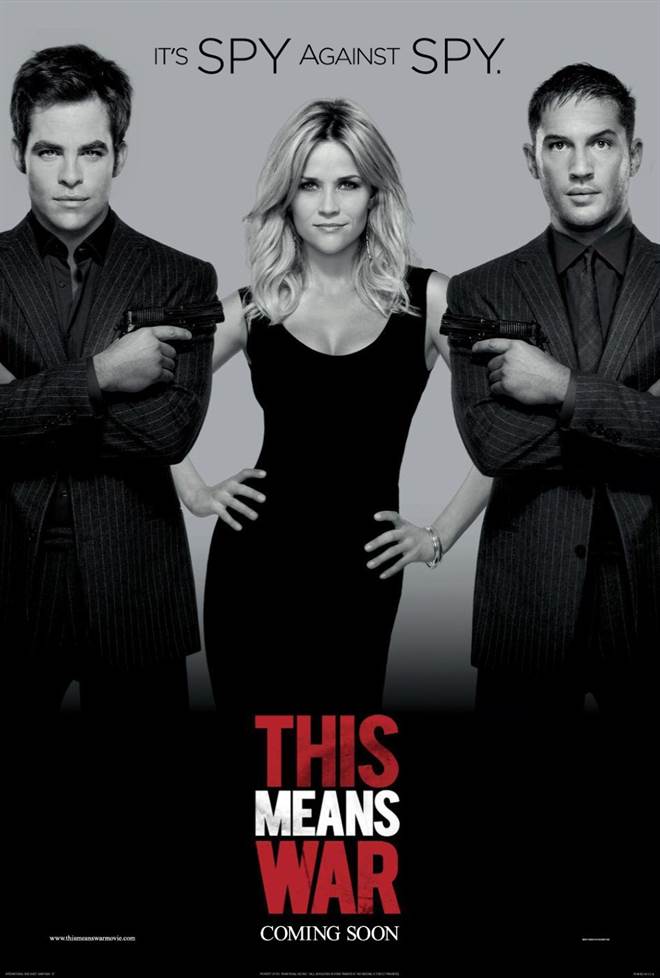 Purchase   DVD/Blu-ray/4K UHD
This Means War is a wonderful action, comedy romance all in one great film. It stars the beautiful and talented Reese Witherspoon, and handsome and funny Chris Pine (Stark Trek) and Tom Hardy. When the film starts, you think that this is a new James Bond movie. There are sexy men in tuxedos, attractive women drinking cocktails in a swanky club,  guns blazing and lots of bad men shooting at each other. Unfortunately, the bad man gets away from them. This is where we meet the two men, FDR Foster (Chris Pine) and Tuck (Tom Hardy) who are not only best friends, but as close as real brothers could be.  They are two very highly skilled CIA agents that fall for the same exact woman, Lauren (Reese Witherspoon). While the two men are falling head over heels for the same woman, they engage in two different full tactical missions working against each other to try to win the heart of this attractive woman. They turn their military & security training into not letting one another let a new love connection from blooming!!! This entails bugging their new love's house and doing 24 hour surveillance on her. Lauren's married best friend Trish, played by the incredibly funny Chelsea Handler, brings a comedic flair to the film. She's full of sass and raunchy advice which she gives to Lauren about being open to dating again and helps her get over her ex-fiancé.

Director McG brings a delightful story of two best friends who know each other weaknesses, wants and skills and mixes in a wonderful cast to bring this great film to life that will keep you laughing from the beginning to the end! The men are like brothers; FDR Foster (Chris Pine) is a womanizer who doesn't know to commit to one woman. He's still into the college bar scene and hooking up, never having had a real grown up relationship. While his best buddy, Tuck (Tom Hardy) is a sad divorcee with a young boy. He's trying to rebuild his family and find love again. They both realize that they need to change their ways, be open and vulnerable. So they both go online and join the same dating site. This is how Lauren (Reese Witherspoon) comes into their life and starts all the crazy behavior.

Lauren (Reese Witherspoon) is a workaholic and hurting from a hard breakup with her ex-fiancé. She has thrown herself into her work and closed off her heart.  This is when her outspoken best friend, Trish (Chelsea Handler), steps in and creates a profile for Lauren on an online dating service to help her jump back into the dating scene. Soon, the three of them get tangled up in dating, and the war begins where the best man hopefully will win the lady's heart and/or body. The men agree on some ground rules about not sleeping with her. But, of course, boys will be boys and try as they will!!! The more they go out with Lauren, they both start falling deeper for her.

Only one man wins Lauren's heart and unfortunately, this will rip the best friends/brothers apart. They will turn against each other and lose their best friend. When the men are about to walk away from each other, they realize that the criminal that got away, and now has their woman, Lauren. They come together again to save her.

Falling for the same woman taught the men learn to love, face their faults, and both start a new life for themselves, which makes them better men and best friends again! This is a wonderful story that both men and woman, they both will enjoy from the beginning to the end.
Cast:
Directed By:
MPAA Rating: R

Chris Rebholz
In "This Means War," Chris Pine and Tom Hardy play Franklin and Tuck, CIA agents with a special kind of relationship. They would do anything for each other, even stop a bullet, if it came to that. Wouldn't it be nice, Tuck asks, to have that kind of connection with a woman? But even wi...
Full Review | Grade: C