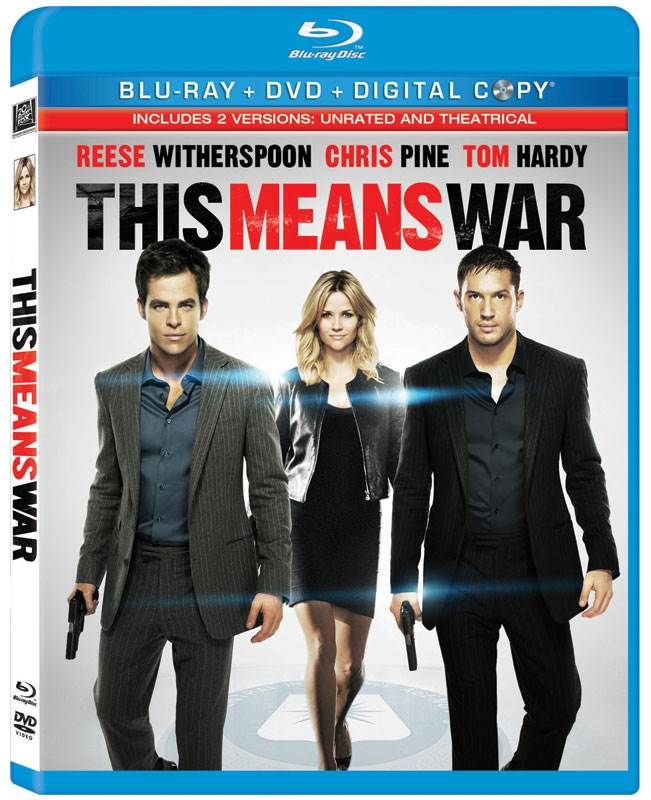 Purchase   DVD/Blu-ray/4K UHD
In "This Means War," Chris Pine and Tom Hardy play Franklin and Tuck, CIA agents with a special kind of relationship. They would do anything for each other, even stop a bullet, if it came to that. Wouldn't it be nice, Tuck asks, to have that kind of connection with a woman? But even with Reese Witherspoon as that woman, this inane premise lives and dies by the chemistry between Pine and Hardy, who are too busy trying to out-do one another to make the buddy dynamic click.

No sooner does Lauren discover that Trish has posted a saucy online personal ad on her behalf than she scores a date with adorable (and inexplicably British) Tuck, who may kill bad guys for a living, but at least passes her deal-breaker test of not being a serial killer. Lauren has more to fear from suave Franklin whom she meets in a video-rental store minutes after her date with Tuck.

The script gives Lauren a few spunky lines with which to rebuff Franklin's charms, then serves up a forced attempt at witty back and forth the following day. But dialogue gets in the way of McG's superficial style, which is best used in nonverbal sequences, like the one where Lauren sashays around her kitchen singing "This Is How We Do It" while her two suitors covertly look for clues on how best to seduce her.

With previous roles, Hardy ("Bronson") and Pine ("The Lieutenant of Inishmore" onstage) have played downright cold-blooded characters, but that streak is so far buried here, posing no real danger to Lauren -- or to one another.

In the distant background, the agents have some unfinished business with a revenge-bent baddie named Heinrich (Til Schweiger), which would ideally have given Witherspoon's character a chance to get in on the action. Instead, the spy thing is just a ruse to explain away some genuinely creepy stalker behavior, as both Tuck and Franklin resort to using GPS devices and hidden cameras to monitor Lauren's every move.

The movie now arrives on Blu-ray in a 2 disc set which contains, on disc 1, the theatrical version of the film as well as an extended version both in high definition. The look and sound of the movie on Blu-ray make for a good viewing experience. As for special features, you'll find 3 alternate endings, a gag reel and some deleted scenes. Over on disc 2 there is just the standard cut of the film as well as a digital copy for weary travelers.

Amusing as it is to imagine America putting its terrorism-fighting efforts on hold to allow two overly interested men try to out maneuver one another for the attention of a woman, it just doesn't work in this film. It's not until nearly an hour in, when the spies' unbelievable friendship disintergrates that "This Means War" becomes even less than what it set out to be.
Cast:
Directed By:
MPAA Rating: R

For more information about This Means War visit the FlickDirect Movie Database. This release has been provided to FlickDirect for review purposes. For more reviews by Chris Rebholz please click here.

Penny McLean
This Means War is a wonderful action, comedy romance all in one great film. It stars the beautiful and talented Reese Witherspoon, and handsome and funny Chris Pine (Stark Trek) and Tom Hardy. When the film starts, you think that this is a new James Bond movie. There are sexy men in tuxedos, attract...
Full Review | Grade: B