The Lorax marks the fourth story of the late great Dr. Seuss to be adapted into a film. 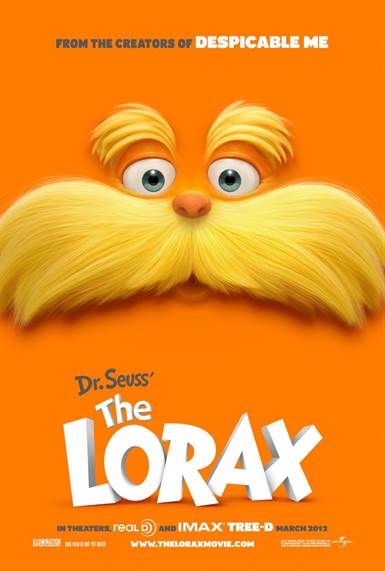 Purchase   DVD/Blu-ray/4K UHD
The Lorax marks the fourth story of the late great Dr. Seuss to be adapted into a film. Two of those films, The Cat in the Hat and How the Grinch Stole Christmas were made into live-action films, while the other, Horton Hears a Who was an animated feature. So far all of the adaptations done by Hollywood have failed in comparison to the original stories or short films of the 70's and unfortunately The Lorax is no exception.

Just as the classic half-hour TV specials of "The Cat in the Hat" and "How the Grinch Stole Christmas" rendered the live-action feature versions of those beloved Seuss properties wholly unnecessary, so the excellent 1972 short version of "The Lorax" feels like a model of elegant writing and wit next to this overlong effort. The story is essentially the same: In a grey, desolate wasteland, a reclusive figure known as the Once-ler (voiced here by Ed Helms) bemoans the fact that years ago, as a young and ambitious entrepreneur, he chopped down all the region's beautiful Truffula Trees, to the chagrin of the portly, moustached nature guardian called the Lorax (Danny DeVito, in fine form).

Determined to find a real, live tree as a present for a girl (Taylor Swift) he likes, plucky young Ted (Zac Efron) sneaks out of town and pays a visit to the Once-ler, now permanently locked away in his ramshackle abode. Though hostile at first, the Once-ler proceeds to tell Ted his story in flashback: how he razed the forest in order to knit thousands of scarf-like products called Thneeds, and how the Lorax, who speaks for the trees, tried in vain to appeal to his reason and conscience.

The film offers a visually rich elaboration of Seuss' hand-drawn world. Before the Once-ler's arrival, the Lorax's domain is an Eden-like paradise, all rolling green hills and crystal-clear lakes, populated by cute critters such as the aptly named Humming-Fish and the bear-like Bar-ba-loots, which perform roughly the same sight-gag functions here that the Minions did in "Despicable Me."

Yet the key to Seuss' tales, as with all good fables, is not only their cleverness but their surpassing elegance and simplicity, qualities that this busy, over-cluttered movie seems entirely uninterested in replicating. On the contrary, nearly every scripting decision seems intended to squeeze "The Lorax" into the uninspired-gabfest of so much studio animation, governed by the sort of second-rate wisecracks and literal-minded story logic that have no place in Seuss' universe.

The book wittily limited the reader's view of the Once-ler to his arms and hands, emphasizing his insatiable greed; the film not only presents him as a tall, strapping young man but gives him a super-annoying dysfunctional family, the better to explain his hang-ups and generate sympathy. Wacky supporting characters abound, from Riggle's loud-mouthed bad guy to a wisecracking granny on skis who's in the movie for no other reason than to give Betty White a typically adorable opportunity.

The 3D element lends a particularly luscious, tactile quality to the Truffula Trees, whose orange, pink and purple blossoms resemble nothing so much as gigantic cotton-candy bursts; otherwise, the finely tuned visuals gain little from the stereoscopic ttreatment. Songs by composer John Powell and co-scribe Paul are genial and loopy enough to give the film something of a Seussical sensibility. In the end though, this film just does not do the Seuss book any kind of justice and is simply another way for Hollywood to stuff their already fat wallets.

Download Dr. Seuss' The Lorax in Digital HD/4K from the iTunes store.