“Silent Hill: Revelation” lumbers from scene to scene, attempting to jazz up the viewing experience 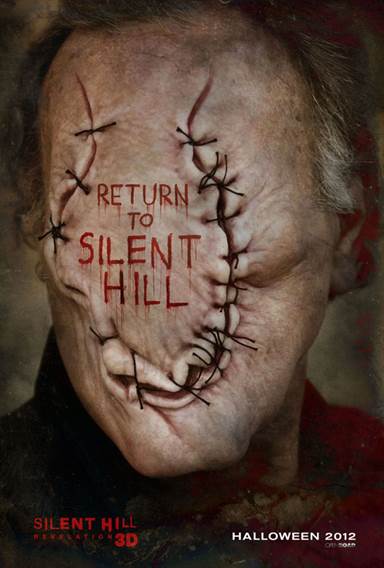 Purchase  DVD/Blu-ray/4K UHD
Since 2009, there have been four "Paranormal Activity" pictures. The last "Silent Hill" movie came out in 2006, which is practically a century in horror film franchise years. Genre fans have short attention spans, making the delayed appearance of "Silent Hill: Revelation" a real head scratcher, especially after the original feature didn't scare up much business at the box office. Perhaps a faded memory of prior adventures is best for this soggy sequel, as writer/director Michael J. Bassett ("Solomon Kane") shamelessly retcons the material to his liking, making the effort's tenuous connections to the earlier work seem downright silly. Instead of starting from scratch, "Revelation" hopes to maintain the previously set course, only to alter the very elements that once defined the premise.

With Rose (Radha Mitchell in a cameo) able to break the curse of Silent Hill for a short amount of time, she decides to return daughter Sharon (Adelaide Clemens) to the land of the living, with father Christopher (Sean Bean) grateful for her sacrifice. Moving from state to state to elude attention from the demonic cult that rules Silent Hill, Sharon, now 18 years of age, and Christopher find their latest home a dead end. With her father abducted, Sharon is instructed to return to Silent Hill to rescue him from the wrath of Claudia (Carrie-Anne Moss), a priestess who needs the young girl to help neutralize the power of witch Alessa. Wading back into the waking nightmare of the town, encountering ghouls of all shapes and bust sizes, Sharon finds herself overwhelmed with the challenge of survival, hunting for clues that will lead her to Christopher and help connect two halves of a special satanic seal that could finally destroy Alessa.

After sitting through "Revelation," you come away with a renewed admiration for the effort put into the movie. Although epicly slow and frightless, "Silent Hill" had a wonderful style and had a slight lean toward menace, while rolling through the gruesome monsters that populated the 1999 video game that inspired the film. "Revelation" has no personality to speak of, with a reduced budget and limited directorial vision turning the potential for an atmospheric terror picture into a television melodrama with occasional bursts of macabre happenings.

The director serves up a limp script of luke warm dialogue and inane plotting, erasing the effective ending of the original feature to introduce the sequel. Apparently, anyone who wants to leave Silent Hill is able to do so, establishing the return of Sharon to the real world after her brief stint in ghost prison, setting up a father-daughter dynamic to quickly attach an emotional handle to a frosty story. Of course, the crossover doesn't make a lick of sense, but little in "Revelation" does, with Bassett maintaining an irritating randomness to the lackluster action, scooping up little bits of gaming detail and supporting characters to appease the fanbase while the plot itself is nonsense, riddled with enough holes and question marks to make one wonder if the production actually read the script before cameras rolled.

Old faces return for duty, including Bean, Mitchell, and Deborah Kara Unger as Dahlia, the mother of Alessa. The same cycle of monsters also repeats, with the cleavage-baring, faceless nurses resurrected to gyrate for the gorehounds once again. Goliath weapon-dragger Pyramid Head also pops in to darken the sequel, only for this round. Those new to "Silent Hill" include Clemens, a flat actress who can't completely swallow her Australian accent; Moss, who does little for the role; and Malcolm McDowell, playing Claudia's chained-up father.

"Silent Hill: Revelation" lumbers from scene to scene, attempting to jazz up the viewing experience with a few fresh threats and a carnival showdown finale that's peppered with even more unexplained characters. Again, six years are an eternity to further a story that wasn't very convincing the first time around, rendering Bassett's attempt to fashion his own visit to the damned community painfully ridiculous, with his labor coming off cheap and clueless after the original at least made an effort to translate the video game's spooky appeal to the big screen.