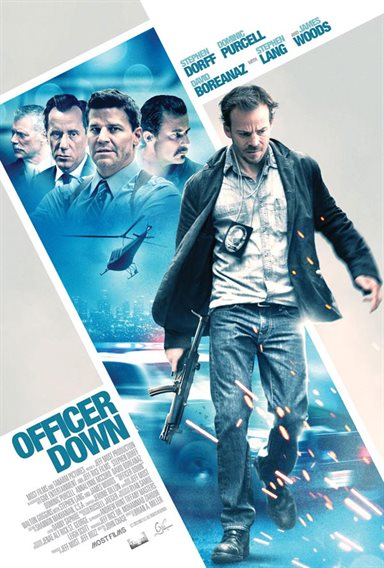 Purchase  DVD/Blu-ray/4K UHD
It's hard to say what type of film "Officer Down" wants to be, but it doesn't appear particularly successful on any front. Part cop drama, part whodunit, with a dusting of action dynamics, the picture marches forward without a game plan, creating a confusing, heavy effort that depends on twists to keep the audience invested, only it's a stretch to believe that anyone will be at the edge of their seat by the time the resolution arrives. However, "Officer Down" is surprisingly settled, eschewing hacky low-budget chaos to attempt a more sensitive understanding of a troubled mind. It doesn't quite achieve its plan for a psychological breakdown, but the effort is appreciated, even in a feature as messy as this one.

Det. David Callahan (Stephen Dorff) is a disturbed man with a long history of alcoholism, which has threatened the stability of his job and his family, including wife Alexandra (Elizabeth Rohm) and teen daughter Lanie (Beatrice Miller). Still recovering from a shooting that left him wounded and without a memory of the evening's events, David remains bewildered by the incident, which labeled him a hero, much to the disgust of Captain Verona (James Woods) and fellow detective Scanlon (David Boreanaz). When a shady Russian man enters his life, purporting to be the savior who helped the cop during his time of need, David is open to his request to investigate the mysterious death of his stripper daughter (AnnaLynne McCord), returning to the seedy side of Connecticut to hunt for clues and monitor suspects. Angel (Walton Goggins) is one exotic bar patron David finds particularly interesting, while owner Royce (Dominic Purcell) keeps his eye on the reformed force of justice, unsure of his motives. With a Russian enforcer (Oleg Taktarov) in the mix as well, David finds himself in over his head, powerless to the drink and his guilt, which he attempts to cool by pouring his heart out to Father Reddy (Tommy Flanagan).

"Officer Down" brings together the likes of Woods, McCord, Boreanaz, Stephen Lang, and Soulja Boy (playing a lowly street thug involved in David's shooting), with Dorff leading an exceptionally oddball cast into the dark lands of Connecticut, where crime is unstoppable, memories are short, and everyone patronizes one lone strip club (roughly the size of a men's room) in search of evening entertainment. On the bright side, at least the movie doesn't take place in Michigan or Louisiana (two states with a virtual chokehold on this type of entertainment).

"Officer Down" is a tale of corruption, though who is exactly dirty is the central mystery. We follow David back to the grim side of his personality, watching him become reacquainted with old habits such as booze and impatience, processing the reality of his missing memory as he bumps into faces from his past, most not happy to see the cop return to the scene of his many crimes. Because a straightforward take on this story is so 1970s, it elects to shake up the narrative with flashbacks, hoping to swat away predictability and, let's be honest, immediate scrutiny by constantly reordering the film's priorities, hoping to keep David a sensitive enigma for at least an hour. He's a hero but truly a scoundrel, while keeping a loose grip on his splintering family life and his faith, purging his soul to a priest in the early going. That "Officer Down" doesn't explicitly chase cheap violent thrills is interesting, with only a few shootouts to keep action fans sated. However, the mystery at hand is feebly executed, often overwhelmed with motivations and last names, laboring to weave an epic series of dastardly events that aren't exactly extraordinary, with the final half hour devoted to a halfhearted explanation of the plot and a non-payoff with gunplay, with plenty of convenient incidents to ease the movie to a close.

Dorff gives the tortured cop role a good workout, but he's not exactly a Pacino-type performer, failing to carry the picture as far as it can go. The supporting cast is equally mechanical, though Woods doing his cranky Woods impersonation is good for a few kicks, especially when Verona pushes a roll of mints on David after he arrives for work unshowered and sauced. "Officer Down" does benefit from this bizarre thespian presence, but it's a small guilty pleasure in a movie that's in dire need of substantial filmmaking and a story unafraid to investigate a fried man without the need to fiddle incessantly with the origin of his sins.

Purchase a DVD/Blu-ray/4K UHD physical copy of Officer Down today at Amazon.com

Download Officer Down in Digital HD/4K from the iTunes store.

For more information about Officer Down visit the FlickDirect Movie Database.