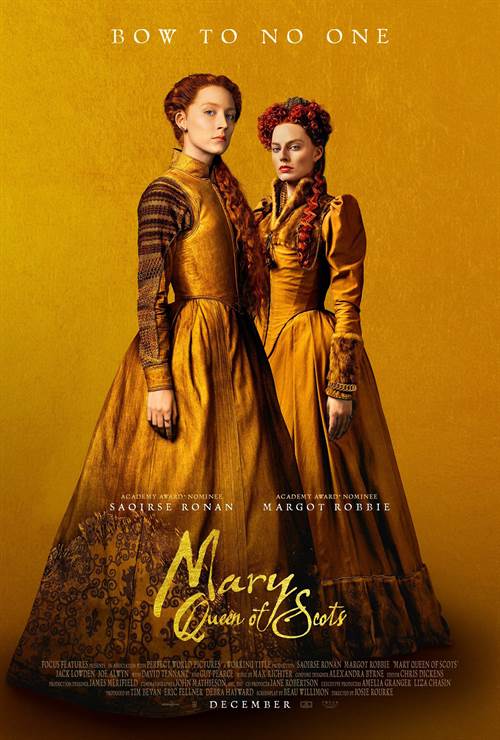 “Mary Queen of Scots” explores the turbulent life of the charismatic Mary Stuart (Ronan). Queen of France at 16 and widowed at 18, Mary defies pressure to remarry. Instead, she returns to her native Scotland to reclaim her rightful throne. But Scotland and England fall under the rule of the compelling Elizabeth I (Robbie). Each young Queen beholds her “sister” in fear and fascination. Rivals in power and in love, and female regents in a masculine world, the two must decide how to play the game of marriage versus independence. Determined to rule as much more than a figurehead, Mary asserts her claim to the English throne, threatening Elizabeth’s sovereignty. Betrayal, rebellion, and conspiracies within each court imperil both thrones – and change the course of history.

Stream Mary Queen of Scots in Digital HD/4K from the AppleTV store.

Listen to the Mary Queen of Scots soundtrack on Apple Music. 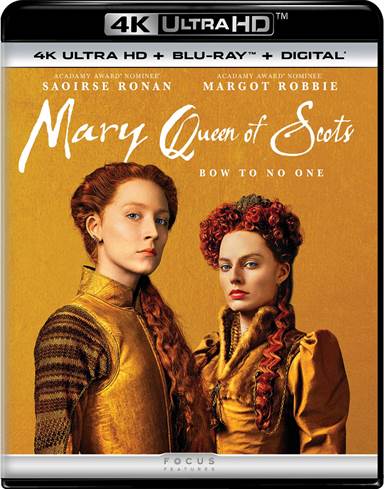 Why does it seem that every producer out there now wants to make an English Period Piece? I guess it's because of the success of the TV series The Crown and others like it. There's nothing wrong with that, there are certainly enough people out there interested in seeing a good period piece.

However, in order to be a ‘good' period piece, the film has to be ‘entertaining' in some way, it has to be ‘engrossing', it has to convey ‘emotion', and certainly, it has to sweep you up in its ‘passion'. For no matter how talented your main actors may be, if your script and story don't allow for those elements to work, all you're left with is an overpacked, dubious, and boring history Lesson.

The story of "Mary" and her battle with "Elizabeth I", has fascinated the film industry for decades, attracting some great talent to various versions -Vanessa Redgrave, Katharine Hepburn, and Samantha Morton have each played ‘Mary' while Helen Mirren, Glenda Jackson, and Cate Blanchett have taken on the ‘Elizabeth' role. This version is no different, attracting two of today's most inspired actresses, Saoirse Ronan and Margot Robbie.

"Mary Queen of Scots" relates the tale of charismatic Mary Stuart (Ronan) who through marriage became the Queen of France at 16, was widowed at 18, and soon after returned to her native Scotland to restore her rightful claim to the throne of England. However, at that moment in time, Scotland and England were both under the rule of her "sister" the dominant and powerful Elizabeth I (Robbie). As the two female Monarchs vie for power and rule, they are both hampered by the men surrounding them, who continually plot to usurp their power. Betrayal, rebellion, and conspiracies within each court imperil both thrones. When Mary does eventually assert her claim to the throne, it threatens Elizabeth's sovereignty and leads to events that change the course of history.

This drama is definitely a noble try, but it lacks any real emotion, generates no real soul and eventually fails to grab you in any sense other than the acting is superb. How so much time, money and effort can be spent on a film like this and wind up being so unaffecting is beyond me.

Director, Josie Rourke, chose her leads actresses wisely, moved her camera adequately, caught the period well enough, but was hampered by a lacking sense of film timing, and a poor screenplay.

The redeeming factor for this 4k release is the Dolby Vision HDR video quality.  It is so sharp it is almost too sharp as sometimes the ladies' makeup is very noticeable.  However, this also makes for beautiful visuals of the sweeping and green countryside of the United Kingdom and beautifully displays the details of the costumes.  Complimenting the picture is a Dolby Atmos audio which showcases the soundtrack well.  The Combo pack only has a few extras which are housed on the Blu-ray disc and include An Epic Confrontation, Tudor Feminism, Something about Marys and audio commentary with Director Josie Rourke and Composer Max Richter.

The matchless Saoirse Ronan in her first historical role is just brilliant, as is Margot Robbie's performance as a maturing "Elizabeth", but again the script limits them from driving their characters into the stratosphere. Additionally, the director made the male characters interchangeable pieces, each could play each, and not a single actor stands out in any significant way. Her feminist view here is that all the men are bad and all the women are good. I hope not.

My take… Only if you hunger to spend two really long hours watching brilliant actresses perform, see the movie. Cheers to Ronan and Robbie!