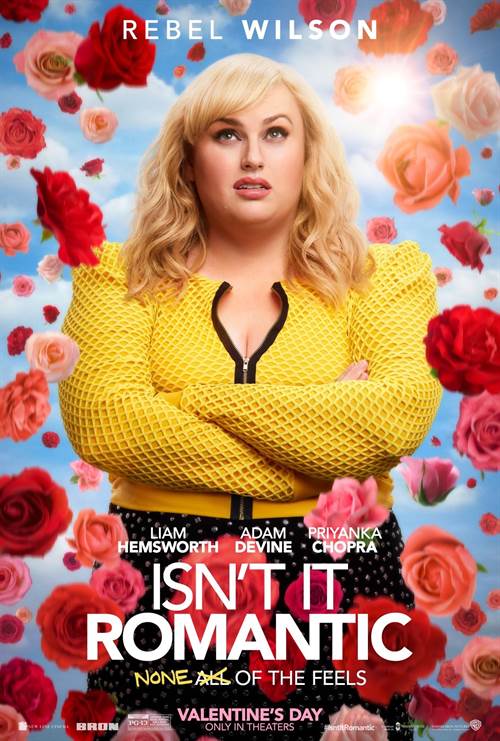 New York City architect Natalie works hard to get noticed at her job but is more likely to be asked to deliver coffee and bagels than to design the city’s next skyscraper. And if things weren’t bad enough, Natalie, a lifelong cynic when it comes to love, has an encounter with a mugger that renders her unconscious, waking to discover that her life has suddenly become her worst nightmare—a romantic comedy—and she is the leading lady.

Wilson stars as Natalie, alongside Hemsworth as Blake, a handsome client; Devine as her co-worker and earnest best friend, Josh; and Chopra as Isabella, a model, and self-proclaimed yoga ambassador.

New Line Cinema presents, in association with BRON Creative, a Broken Road/Little Engine Production, “Isn’t It Romantic.” Slated for release on February 13, 2019, the film will be distributed domestically by Warner Bros. Pictures. The film has been rated PG-13 for language, some sexual material, and a brief drug reference.

Stream Isn't It Romantic in Digital HD/4K from the AppleTV store.


Get A Free Copy of Isn't It Romantic Starring Rebel Wilson  5/28/2019 4:41 PM EST
Are you a fan of Rom-Coms?  Do you think Rebel Wilson is hilarious?  Then you will definitely want to check out her latest film Isn't It Romantic coming to stores this month. Even better, how would you like to win a copy on Blu-ray? FlickDirect, in conjunctions with Warner Bros. Studios, wants to give one lucky person the chance to win a Blu-ray Combo pack of the hit movie that saw Liam Hemsworth ...  More>> 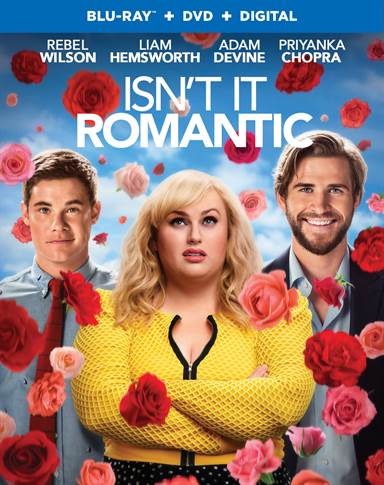 Rebel Wilson has proven herself in comedies before but, perhaps, people wouldn't quite think of her as a first choice in a romance film. However, in Isn't It Romantic, she shows that she can also pull off the popular romantic comedy genre. Now, you can bring this title home with its release on Blu-ray.

Natalie (Wilson; the Pitch Perfect series) is an architect who mostly designs parking garages. Her co-workers are her friend and assistant, Whitney (Betty Gilpin; Glow) and her coworker, Josh (Adam DeVine; Pitch Perfect) who secretly has a crush on her. All three have a disagreement about romantic comedies and Natalie spends hours one day explaining to Whitney why they are unrealistic. I ironically on that same day, Natalie gets mugged on the subway and is knocked unconscious.  When she wakes up in the hospital, she finds herself in an "alternate reality" where handsome men find her sexy and she is suddenly a highly respected and successful architect. While this sounds ideal, she quickly realizes that she needs to find someone to fall in love with her in order to get back to her real life.

She meets Blake (Liam Hemsworth; The Hunger Games), a handsome billionaire and he falls in love with her. However, Natalie comes to the realization that Josh is the one she should be with and even tries to stop his wedding a beautiful supermodel played by the beautiful Mrs. Nick Jonas, Priyanka Chopra (Quantico). In the end, though, she sees that the love she needs isn't from anyone else, it's from herself.  Once she learns that she returns to her former life but with newfound confidence.

Wilson demonstrates that she has what it takes to have a starring role in a film, especially a rom-com.  She is her usual self-deprecating funny self while displaying wit and intelligence that may not have been as evident in her past films.  Gilpin portrays dual characters here and does so seamlessly.  Devine and Wilson have great chemistry which is why they seem to work together often.  They simply "click" and he does a great job of supporting Wilson.  Hemsworth shows his ability to handle humorous material.

The 1080p high definition video quality really enhances this film and the multitude of colors that explode off the screen.  The picture is clear and clean and the details are well defined.  The  DTS-HD Master audio 5.1 is a strong complement to the excellent video.  The quality is crisp and sharp, especially when showcasing the soundtrack.  The combo pack includes the Blu-ray and DVD discs and Digital HD copy of the film as well as deleted scenes, and a feature entitled "I Wanna Dance!". This feature includes a discussion with cast and crew about the karaoke scene in the film.

I am a Rebel Wilson fan and, once again, she didn't disappoint. It's a great spin on the usual romantic comedy and offers a great message to people about the value of self-worth and self-love. This would make a great addition to your home entertainment collection.