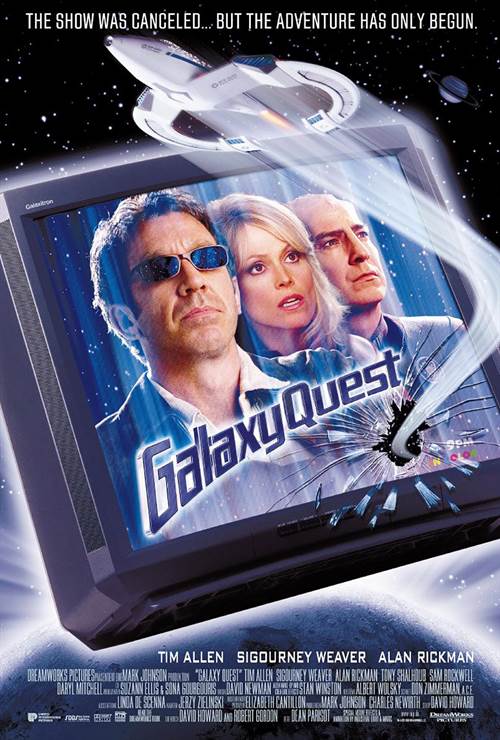 A team of intrepid adventurers travels through the outer reaches of the galaxy, each week finding excitement and adventure on Galaxy Quest! Or at least that's the way it was in the mid-1970s, when brave if reckless Captain Peter Quincy Taggart, lovely Lieutenant Tawny Madison, and inscrutable alien Dr. Lazarus were the leaders of an interstellar law enforcement team on the TV series of that name. Twenty years later, the show is still in reruns, and Jason Nesmith (Tim Allen), Gwen DeMarco (Sigourney Weaver), and Alexander Dane (Alan Rickman) prop up their sagging careers by making appearances at sci-fi conventions, where they grudgingly shake hands and give autographs for the show's socially inept following. However, it turns out that nerdy sci-fi fans aren't the only ones watching: somewhere in another solar system, a group of alien rebels living under a regime of violence and repression have picked up broadcasts of Galaxy Quest, and they aren't aware that it's fiction. They travel to Earth and encounter the Galaxy Quest cast, who figure that they're just another bunch of guys who like to dress funny. However, they soon realize that they're being hired not for another autograph-signing session but for a real-life outer space rescue mission.

Allison Rose
While Galaxy Quest starts off like any other parody, it morphs into a truly human story about people, their humanity, their fragility, and their insecurities.
Full Review | Grade: A