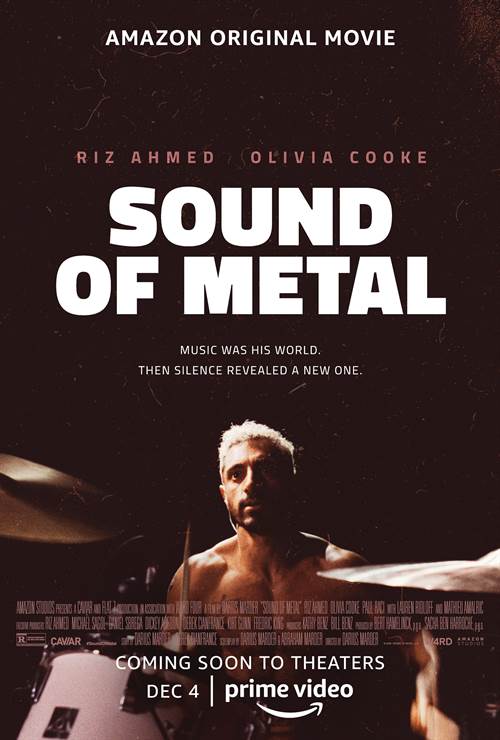 During a series of adrenaline-fueled one-night gigs, itinerant punk-metal drummer Ruben (Riz Ahmed) begins to experience intermittent hearing loss. When a specialist tells him his condition will rapidly worsen, he thinks his music career — and with it his life — is over. His bandmate and girlfriend Lou (Olivia Cooke) checks the recovering heroin addict into a secluded sober house for the deaf in hopes it will prevent a relapse and help him learn to adapt to his new situation. But after being welcomed into a community that accepts him just as he is, Ruben has to choose between his equilibrium and the drive to reclaim the life he once knew. Utilizing startling, innovative sound design techniques, director Darius Marder takes audiences inside Ruben’s experience to vividly recreate his journey into a rarely examined world.

Listen to the Sound of Metal soundtrack on Apple Music.

Sound of Metal images are © Amazon Studios. All Rights Reserved.


Sound of Metal Advanced Virtual Screening Contest  11/20/2020 10:54 AM EST
Amazon Studios has created some quality content since it began producing feature films.  Its latest endeavor, SOUND OF METAL, is opening in limited release in theaters this week and on digital at the beginning of December.  In anticipation of the Digital release, Amazon Studios, in conjunction with FlickDirect wants to give some lucky winners the chance to win a Virtual Advance screening pass good...  More>> 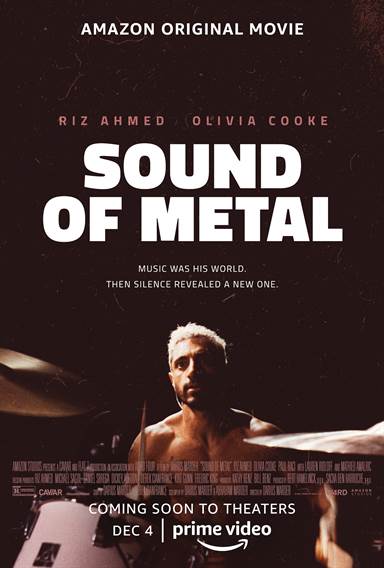 The saying goes…be careful what you wish for, you may just get it.  To put it another way, if you get what you think you wish for you may be disappointed with the results.  Sometimes, it's better to just be satisfied with and grateful for what you have already instead of trying to "fix" things.   This lesson plays out over two hours in Amazon's feature film, Sound of Metal.  Directed by Darius Marder (Loot), the movie, opening in limited release this week, offers a look at how different people handle similar situations and how getting what you want isn't always what is best for you.

Ruben (Riz Ahmed; Rogue One: A Star Wars Story), is in a band with his girlfriend, Lu (Olivia Cooke; Ready Player One) and together they travel around the country "touring".    However, when Ruben begins losing his hearing, he ignores it at first and then doesn't follow the audiologist's orders to stay away from loud noises.  Then, in the middle of a performance, he walks out and finally admits to Lu that he can't really hear anything at all.  Concerned he will relapse into addiction, Lu contacts Ruben's sponsor who finds him a spot in a home for sober addicts who are deaf.

Resistant and completely out of his element at first, Ruben eventually learns sign language and becomes a functioning member of the home, going so far as to help out at the local school for the deaf.  However, when Ruben checks out online what Lu has been doing while living with her estranged father in Paris, he suddenly no longer feels content and sells all his equipment and his RV to get enough money for cochlear implants.  After his surgery, the owner of the deaf facility, Joe (Paul Raci; Baskets), refuses to let Ruben stay as it becomes apparent that Ruben never really accepted his deafness.  Ultimately…"be careful what you wish for" is a lesson Ruben learns the hard way.

Ahmed has always made an impression with the projects he chooses, and he is superb on most of those occasions.  Sound of Metal is no exception and is one of his finest performances to date.  It is apparent the myriad of emotions that Ruben experiences as Ahmed displays anger, denial, despair, contentment, and eventually the realization that his life has changed, and he needs to accept it.  Cooke, while not as solid as Ahmed, still exhibits a range of emotions and the two have a chemistry that manifests into a deep understanding and caring onscreen.  Raci plays the wise elder statesman who has been where Ruben is going and does his best to guide Ruben away from the rabbit hole.

Sound of Metal is a poignant study of trying to accept the life one has been given and not dwelling on the loss and is beautifully directed by Marder in his first endeavor as a feature filmmaker. His use of muffled or complete lack of sound envelopes the viewer offering a sense of the physical changes Ruben experiences.  He weaves a web of not only physical transformation but emotional changes as well, which Ahmed wonderfully displays throughout the 2 hours running time.

While the story could have focused only on the physical aspects of deafness and how profound an effect it could have on anyone, let alone a musician, including the emotional rollercoaster Ruben goes on makes for a complete picture.  The film is engaging, engrossing, and evenly paced so not only does the viewer not realize how long Sound of Metal is but leaves one yearning for more as you watch the credits roll.