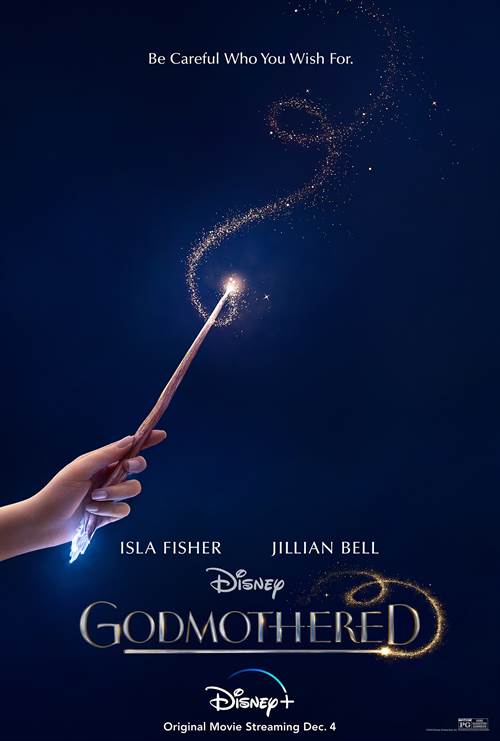 Set at Christmas time, “Godmothered” is a comedy about Eleanor, a young, inexperienced fairy godmother-in-training (Jillian Bell), who upon hearing that her chosen profession is facing extinction, decides to show the world that people still need fairy godmothers. Finding a mislaid letter from a 10-year-old girl in distress, Eleanor tracks her down and discovers that the girl, Mackenzie, is now a 40-year-old single mom (Isla Fisher) working at a news station in Boston. Having lost her husband several years earlier, Mackenzie has all but given up on the idea of “happily ever after,” but Eleanor is bound and determined to give Mackenzie a happiness makeover, whether she likes it or not.

Listen to the Godmothered soundtrack on Apple Music. 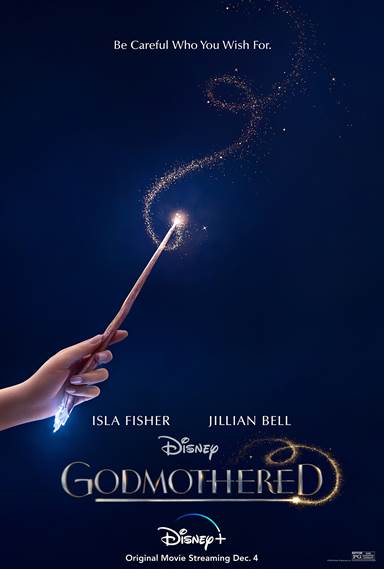 Fairytales…they tend to start off with "once upon a time", end with "…and they lived happily ever after", and include at least one magical, fairy godmother.  Most little girls get the idea of a handsome prince sweeping them off their feet and their very own fairy godmother transforming them into beautiful princess implanted in their brains from a very young age but is any of it real? And are fairy godmothers born that way or do they go to school to learn how to become godmothers?  Well, if you believe Disney+'s newest feature film, it would be the latter.  Debuting on the streaming service on December 4th, Godmothered follows one young lady's journey to become the best fairy godmother she could be.

Eleanor (Jillian Bell; Office Christmas Party) is a fairy godmother in training, who lives and learns with the other, older fairy godmothers in Motherland.  She is young, inexperienced, eager to learn, and is disliked by almost every other godmother in the motherland.  The headmistress, Moira (Jane Curtain; Coneheads), tries to pretend nothing has changed but, since there hasn't been a godmother assignment in years, the Motherland is in jeopardy of being closed down and making all the godmothers into tooth fairies instead.  Learning of their imminent fate, Eleanor finds one last letter from a ten-year-old girl named Mackenzie (Isla Fisher; Definitely, Maybe) and decides to help Mackenzie find her prince, and in the process save Motherland and become a full-fledged fairy godmother.

However, when Eleanor finds Mackenzie, she meets a woman in her thirties who is a widow with two daughters.  Mackenzie thinks Eleanor is nuts until she does something magical, causing Mackenzie to question everything.  As Eleanor desperately tries to get Mackenzie to be happy and live happily ever after, she finds she is running out of time and Motherland is days away from being closed forever.  Ultimately, Mackenzie does find happiness and true love but not in the way you think.

Fisher has a history of portraying strong women who happen to also be the love interest in a romantic comedy. Godmothered is no different and while she does a good job with her role, it isn't anything we haven't seen from her before.  Likewise, Bell once again plays the ditzy, naïve blonde, which is a character she has come to practically perfect.  Curtain gets to be the evil headmistress trying to dash Eleanor's dream and she handles the part well.  Mackenzie's daughters, Mia and Jane are played by newcomer Willa Skye and Jillian Shea Spaeder (Walk the Prank), the latter having an exceptional singing voice.

Godmothered is classic Disney fare, with the angry, disillusioned adult raising two daughters and a scatterbrained, quirky, do-gooder trying to change things for the better.  Add in a dash of an evil villain, a pinch of handsome man to be the love interest and stir vigorously.  Now you have all the makings of a formula that Disney unabashedly creates every so often.

One change that is an interesting (and mildly risky) move on Disney's part is the ending.  Offering various views of "we all love differently" and themes of equity, even going so far as to include a gay couple with their son, is not something we are used to seeing from the family-friendly company.  And, while the move may get them into hot water with the more conservative members of our society, I applaud them for their decision to be inclusive and progressive (even if it is only for a minute or two at the end of the film).

Godmothered is cutesy, cheesy, predictable, and uninspired but it has a few good moments and a pretty good soundtrack.  I'm sure parents will endure multiple viewings of the movie, while their little "princesses" twirl around the living room in their dress-up ball gowns and tiaras.