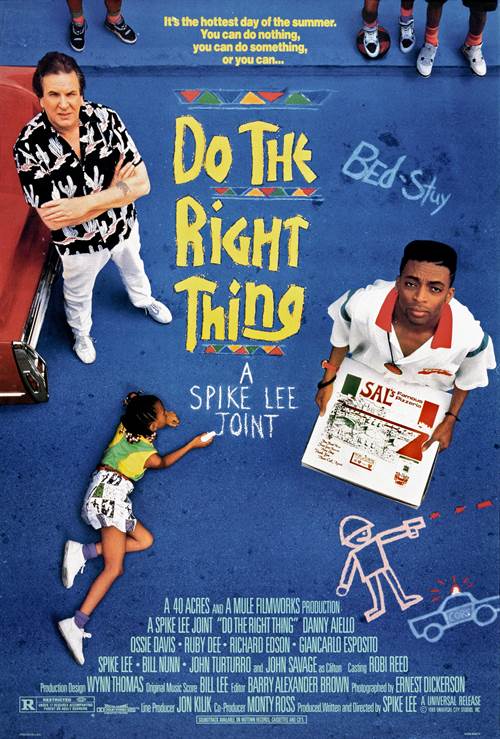 Do The Right Thing Synopsis

This powerful visual feast combines humor and drama with memorable characters while tracing the course of a single day on a block in the Bedford-Stuyvesant area of Brooklyn. It's the hottest day of the year, a scorching 24-hour period that will change the lives of its residents forever. Danny Aiello co-stars in this absorbing tale of inner-city life that heats up with vivid images and unforgettable performances.

Purchase DVD/Blu-ray/4K UHD physical copy of Do The Right Thing today at Amazon.com

Stream Do The Right Thing in Digital HD/4K from the AppleTV store.

Listen to the Do The Right Thing soundtrack on Apple Music.

Do The Right Thing images are © Universal Pictures. All Rights Reserved.

Do The Right Thing 4K Review 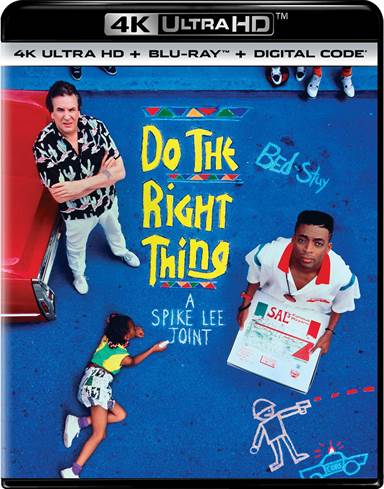 What if you watched a movie about poor African Americans living in New York?  What if that film depicted growing racial tensions between black people and Italian or Korean shop owners in the neighborhood?  What if, after a confrontation between the shop owners and the locals, a young black man was killed by the police which started a riot?  What if that riot caused protestors to vandalize the shops and set the pizza place on fire?  Some might think they were watching a documentary about the current state of our country or perhaps even the nightly news.  In fact, they would be watching a film that is over thirty years old – Spike Lee's (BlacKkKlansman) Do the Right Thing.

Mookie (Lee) is a 25-year-old African American man living in the Bedford- Stuyvesant neighborhood of Brooklyn.  He is a pizza delivery guy for Sal's, the local pizza/Italian food restaurant.  Mookie has a toddler son with his "sort of" girlfriend, Tina (Rosie Perez; Birds of Prey) but only shows up to her place about once a week which, understandably makes her angry.

All of the locals go to Sal's for a "slice" despite the fact that one of Sal's sons, Pino (John Turturro; Transformers) is racist.  One day, Buggin'Out (Giancarlo Esposito; Breaking Bad) notices there aren't any African Americans on Sal's Wall of Fame and decides to start a boycott of Sal's.  That night he and Radio Raheem (Bill Nunn; Spider-Man) go to Sal's to "protest", Sal (Danny Aiello; Leon: The Professional) yells at Raheem to turn off his radio and then destroys it with a baseball bat when Raheem refuses.  Raheem then attacks Sal, and the police arrive to subdue Raheem.  While being restrained by the police Raheem chokes to death causing the whole neighborhood to start a riot and burn down Sal's pizzeria.

Lee wrote, directed, and starred in Do the Right Thing, which was his fourth feature film and his first Golden Globe and Oscar nominations.  It has been studied and praised for years bringing attention to and putting a spotlight on police brutality that, unfortunately, still exists thirty plus years later.  His script, unique camera angles and quick-cut editing makes Do the Right Thing a film that should be studied in film classes across the country.  While the movie is a new classic, I must admit I felt it started a little slow but picked up by the third act.

Besides Lee, this cast is made up of all-stars including the debut of Perez.  A young Samuel L. Jackson (Pulp Fiction) back when he was simply Sam Jackson, plays Mr. Senor Love Daddy, a radio host who watches and observes everything and everyone from behind the glass windows of his radio booth.  Aiello portrays the stereotypical Italian American as a man with compassion but also a quick and dangerous temper.  His ability to switch between the two extremes is a testament to his abilities as an actor.  Veteran actors Ruby Dee (Jungle Fever) and Ossie Davis (The Client) offer a sensibility to their characters as they try to be the voices of reason in the violent world around them.

The 4K video is a drastic upgrade from the Blu-ray format and the picture quality is crisp and clean.  The DTS:X audio is incredible with sounds emanating from all around the viewer.  It is apparent with many of the sound effects and some of the music and is an absolute treat to one's ears.  There is only one new extra (an intro by Lee) on the UHD Disc but the previously released ones get a boost from the UHD quality as well.  They include: Do the Right Thing: 20 Years Later, deleted and extended scenes, behind the scenes, Making Do the Right Thing, Editor Barry Brown, The Riot Sequence, Cannes 1989, trailers, 20th Anniversary Edition feature commentary, and audio commentary.

Spike Lee, as a writer and director, speaks to and for a segment of the population.  His work can sometimes be seen as controversial, but it also has a greater purpose and message to bring to the world.  Hopefully, the world will learn that lesson sooner rather than later.