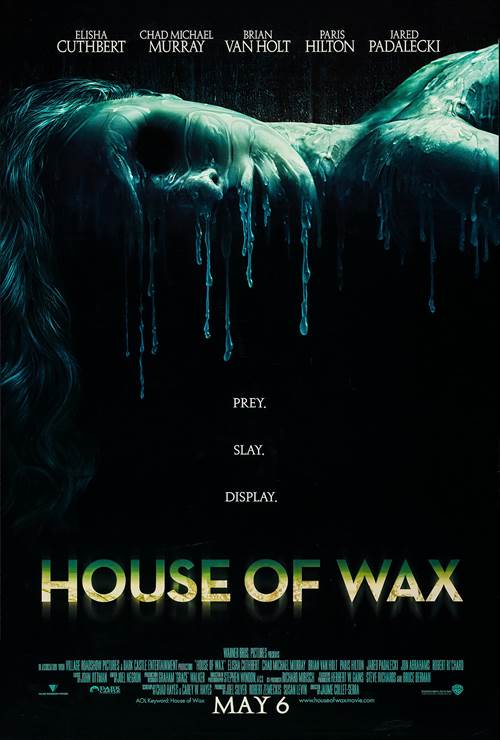 Master horror producers Joel Silver and Oscar-winning Robert Zemeckis helm this retelling of the classic 1950's Vincent Price terror tale! Chad Michael Murray ("A Cinderella Story," TV's "One Tree Hill") and Paris Hilton ("Raising Helen") are part of a group of college students with car trouble who find themselves stranded in the seemingly abandoned town of Athelston, Iowa. Unfortunately, there are still two people left - demented twin brothers who enjoy encasing their victims in hot wax, and setting them up as wax museum exhibits.

Stream House of Wax in Digital HD/4K from the AppleTV store. 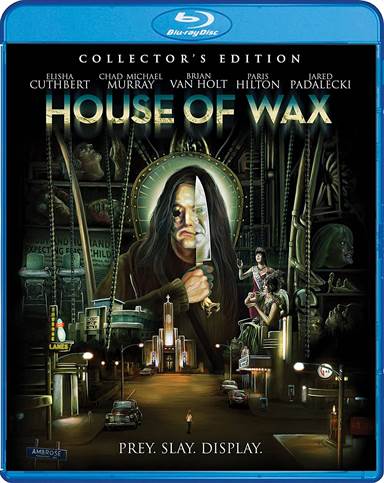 In 2005, a remake of 1953's House of Wax (which was a remake of the 1933 film, Mystery of the Wax Museum) premiered at the Tribeca Film Festival.  A week later it was released in theaters and, eventually, grossed $70 million worldwide on a $40 million budget.  It garnered a lot of attention, mainly from director Jaume Collet-Serra's (Orphan) decision to cast "influencer" Paris Hilton along with several excellent, young actors.

The marketing campaign, "Watch Paris Die", was an ingenious and calculated risk which probably added to the gross profit, as people went to see the movie because they disliked Hilton.  While the film has been released on Blu-ray previously, Shout! Factory, doing what they do best, includes more extras than were previously released on this "Collector's Edition" of House of Wax.

A group of friends decide to take a road trip to see a football game in Louisiana and camp out overnight in a field.  When a mysterious pick-up truck arrives and shines its headlights at the group, Nick (Chad Michael Murray; One Tree Hill), a former football star who ends up on the wrong side of the law, throws a football and breaks one of the headlights.  The next morning, Wade's (Jared Padalecki; Supernatural) fan belt snaps so he and his girlfriend, Carly (Elisha Cuthbert; 24) get a ride into the nearest town by one of the locals.  Ambrose, while seemingly looks deserted, hides a dark secret just under the surface and the group is unprepared for the horrors they uncover.

Between Murray, Padalecki, Cuthbert, Brian Van Holt (Black Hawk Down), Jon Abrahams (Scary Movie), and Robert Ri'chard (Coach Carter), the acting is very well done, and the younger cast has good chemistry.  Hilton is surprisingly decent, which I wasn't expecting, so perhaps Collet-Serra wasn't stupid to add her.  She is an okay actress and her appeal back in the early 2000s makes her a strong choice.

The 1080p resolution is scanned from a brand new 2K restoration which provides a very sharp and clean picture with minimal noise or graininess.  Colors pop off the screen, when necessary, even though the general color palette tends to trend towards the subtle, muted side.  Blood, skin tones, and wax are all pure and crisp.

The DTS-HD Master Audio 5.1 is layered with dialogue, music, and ambient noise.  Each component adds depth to this pure slasher-type movie.  The mid-range offers some great tonal quality, but the low tones tend to drop off a bit, sometimes making the sound uneven.

Shout! Factory has added a few, new extras including an interview with Hilton and while she was good in the film, the interview, Die, My Darling, is hideously fake.  She smiles unnaturally through most of it and offers a "tee-hee" little laugh sometimes that was simply pathetic and made the interview unwatchable.  The other new extras include The Tale of Blake and Paige, Organ Grinder, and To Me, They Live and Breathe.  The previously released extras are B-Roll and Bloopers Video Cast Commentary, From Location: Joel Silver Reveals the House of Wax, Wax On: The Design of House of Wax, The House Built on Wax: The Visual Effects of House of Wax, Alternate Opening: Jennifer Killed, Gag Reel, Vintage interviews with cast and crew from the electronic press kit, a vintage featurette, and the theatrical trailer.

The first House of Wax film from 1953 was a classic and, even with a solid cast, the 2005 remake is plain and simply boring.  It begins slowly as we get the character development, and it shows some promise as we explore the house of wax but ultimately the movie falls flat, except for the various ways our killer murders the victims.  They are graphic and unique which is a bright spot in act III.

House of Wax may have a cult-like following, and many people watch it annually around Halloween, but the movie leaves a lot to be desired.  Shout! Factory, however, always turns out a quality product with good video and audio quality and a nice portion of extras.

If I'm rating the film, it gets a D/D+.  Shout! Factory's Collector's Edition Blu-ray easily gets a B+.