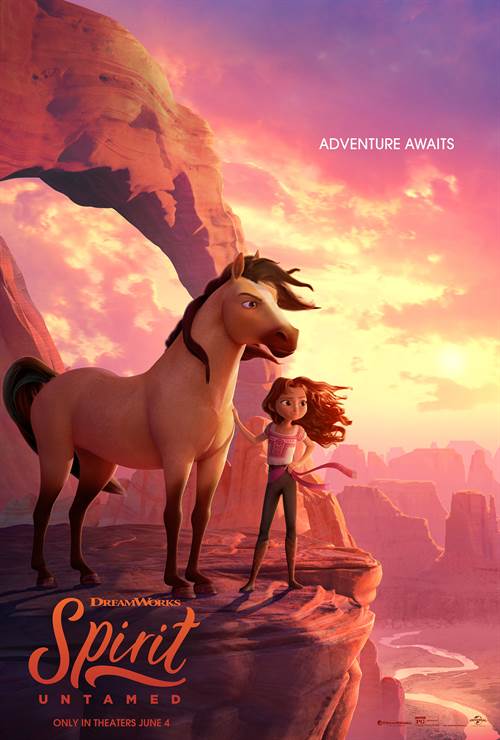 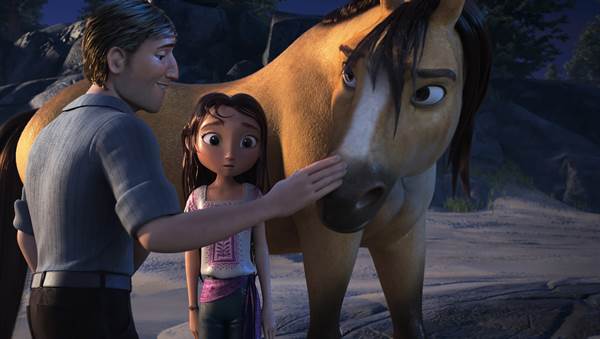 An epic adventure about a headstrong girl longing for a place to belong who discovers a kindred spirit when her life intersects with a wild horse, Spirit Untamed is the next chapter in the beloved story from DreamWorks Animation.

Like her mother, Lucky isn’t exactly a fan of rules and restrictions, which has caused her Aunt Cora (Academy Award® winner Julianne Moore) no small amount of worry. Lucky has grown up in an East Coast city under Cora’s watchful eye, but when Lucky presses her own luck with one too many risky escapades, Cora picks up stakes and moves them both back with Lucky’s father, Jim (Oscar® nominee Jake Gyllenhaal), in Miradero.

When a heartless horse wrangler (Emmy nominee Walton Goggins, FX’s Justified) and his team plan to capture Spirit and his herd and auction them off to a life of captivity and hard labor, Lucky enlists her new friends and bravely embarks on the adventure of a lifetime to rescue the horse who has given her freedom and a sense of purpose, and has helped Lucky discover a connection to her mother’s legacy and to her Mexican heritage that she never expected.

Spirit Untamed is the next chapter in DreamWorks Animation’s beloved franchise that began with the 2002 Oscar-nominated film Spirit: Stallion of Cimarron and includes an Emmy-winning TV series. The film is directed by Elaine Bogan (Netflix and DreamWorks Animation Television’s Trollhunters: Tales of Arcadia) and is produced by Karen Foster (co-producer, How to Train Your Dragon). The film’s co-director is Ennio Torresan (head of story, The Boss Baby), and the film’s score is by composer Amie Doherty (Amazon’s Undone, DreamWorks Animation’s Marooned).

Stream Spirit Untamed in Digital HD/4K from the AppleTV store. 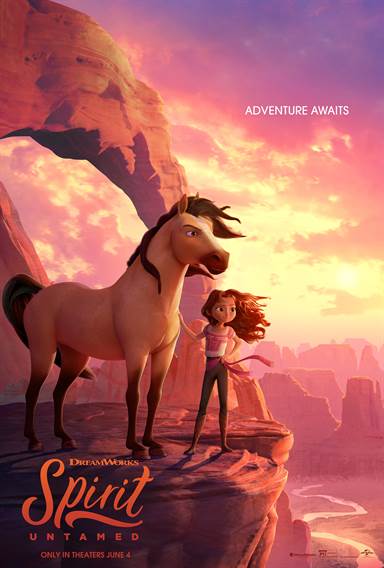 Nominated for the Academy Award for Best Animated Feature Film, 2002's Spirit: Stallion of the Cimarron, follows the journey of a young stallion born into a herd of wild horses.  He eventually grows up to become the leader of the herd.  Fifteen years after the movie's release, DreamWorks Animation teamed up with Netflix to bring an animated series, Spirit Riding Free, to the streaming channel. From May 2017 to the end of 2020, the series had twelve seasons and seventy-eight episodes.  This month, a second film, Spirit Untamed, is being released, again by DreamWorks Animation and distributed by Universal Pictures.

Lucky Prescott (Isabela Merced; The Transformers: Last Knight) never really knew her mother, Milagro Navarro (Eiza Gonzalez; I Care a Lot).  A skilled stunt rider, she died in an unfortunate accident when Lucky was a baby.   Lucky then went to live with her Aunt Cora (Julianne Moore; The Kids Are Alright) on the East Coast, but after Lucky takes one risk too many, Cora decides Lucky needs to spend time with Cora's brother/Lucky's Father, James (Jake Gyllenhaal; Spider-Man: Far From Home), in Miradero, the town where Milagro grew up.  Initially Lucky was unimpressed by the small rural town but after watching the stunt riders, she wanted to learn more.

On the train ride to Miradero, Lucky watches out the window at some wild horses running and yearns for the same unbridled freedom they have.  Once in Miradero, Lucky watches as one of the drifters captures the lead horse (she named Spirit) and tries to "break him" to become tame.  Sensing Spirit's unhappiness, Lucky gains his trust and eventually sets him free.  As she and her friends, Pru (Marsai Martin; Black-ish) and Abigail (McKenna Grace; Gifted) try to outrun the horse Wranglers, Lucky feels a sense of purpose she never had before and senses a link to her mother helping her to feel closer to the woman she barely knew.

While the vocal talent is terrific, even the younger actors are impressive, this latest entry into the animated horse franchise doesn't quite live up to the original film or the Netflix series.  The whole story is very generic and "by the numbers".  Lucky is a rebellious child who goes to visit the father she barely knows and over the course of an hour, she manages to mature and begs to stay in the little town (after saving the day – and the horse).

The animation is sharp and clean, but I would expect nothing less from DreamWorks and the technological advances that make computer-generated animation possible.  The colors are bright and vibrant, making the people, animals, and scenery jump off the screen daring the audience to notice.  The audio is also captivating with crisp dialogue and robust music simmering in the background.  Director Elaine Bogan and her co-director, Ennio Torresan Jr. both make their directorial debuts with this project, which may be part of the reason it seems so basic.  They do a decent job with Aury Wallington (Sex and the City) and Kristin Hahn's (Stargirl) screenplay but don't add anything to draw audiences in.

Rated PG, Spirit Untamed is meant to be a film for the whole family.  Young children will love the colorful costumes and the beautiful horses and parents will like the moral of the story.  However, unlike many other animated films, there is nothing to grab older kids to want to stay and watch the ninety-minute movie.

In true merchandising fashion, I'm sure there will be Spirit stuffed animals and Lucky Halloween costumes but, sadly, there really isn't much that is memorable about the movie and I'm sure it will all but be forgotten by August.