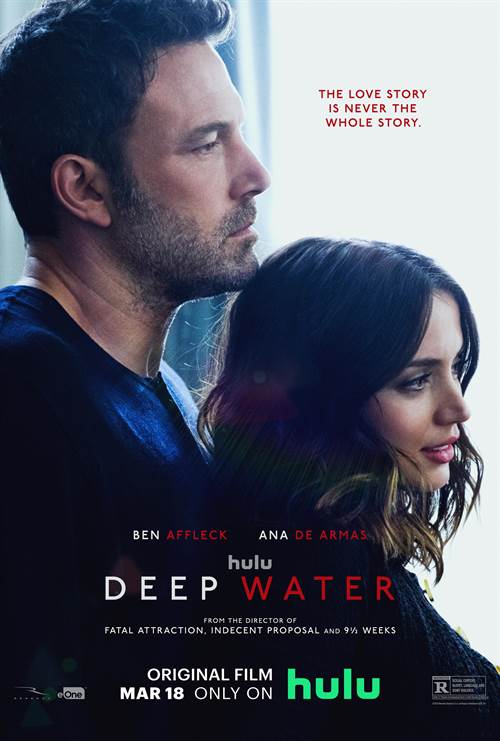 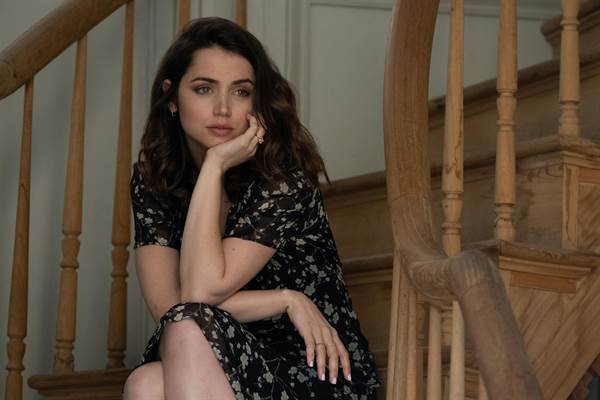 Based on the celebrated novel by famed mystery writer Patricia Highsmith (The Talented Mr. Ripley), “Deep Water” takes us inside the marriage of picture-perfect Vic (Ben Affleck) and Melinda (Ana de Armas) Van Allen to discover the dangerous mind games they play and what happens to the people that get caught up in them. 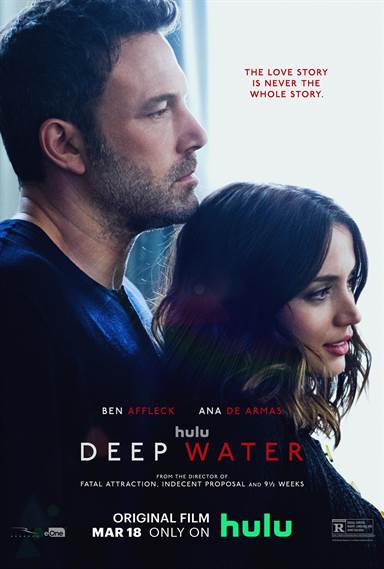 Relationships are complicated.  Even when they are good, they still have their issues.  When they are bad, they are awful.  Regardless…good, bad, or ugly…they are typically dysfunctional. However, when does dysfunctional border on psychotic?    It’s a fine line and seems unimaginable what some people will do for love.  That theme is explored in Patricia Highsmith’s 1957 novel, Deep Water.  It asks the question; how far would someone go for love and explores the delicate balance between love and hate?  Director Adrian Lyne (Fatal Attraction) brings Deep Water to Hulu this week after several COVID-related delays.

Vic Van Allen (Ben Affleck; Zack Snyder’s Justice League) and his beautiful and much younger wife, Melinda (Ana de Armas; Knives Out) live in New Orleans in a mostly loveless marriage. They have one child, a daughter named Trixie (newcomer Grace Jenkins), and a group of friends that throw parties and get-togethers on a regular basis.  Vic, in his early fifties, is retired after creating drone technology.  The Van Allens have a nice home and Vic gives Melinda a healthy allowance each month.  From the outside, they look like a loving and happy couple but for those in the know, looks can be deceiving.

Melinda and Vic have a somewhat unusual arrangement.  She agreed to stay with Vic rather than go through the hassle of a messy divorce and in return he looks the other way to all her affairs with other men.  Pretty simple, right?  Except, when one of Melinda’s lovers ends up dead, Vic informally takes responsibility for the guy’s death in an attempt to scare off other suitors. However, when another of Melinda’s “dates” is found floating in the pool at a house party – yes, she would invite them to parties and flaunt them in front of Vic and their friends – Melinda begins to suspect Vic had something to do with Charlie’s (Jacob Elordi; Euphoria) drowning.

Perhaps, because there is so much in the novel that screenwriters, Zach Helm (Mr. Magorium’s Wonder Emporium) and Sam Levinson (Euphoria) tried to fit into 2 hours, the story sometimes seems rushed which unfortunately makes it a little muddled and confusing.  Affleck expresses every emotion Vic is thinking and feeling across his face.  When he looks at Melinda it is obvious, he loves his wife. Conversely, when he sees her flirting (or worse) with other men, the barely contained rage is evident in every part of his body and at those moments the viewer can imagine Vic capable of murder.

De Armas portrays a different type of character than we are used to seeing her play.  Normally, she is demure and seemingly innocent but, as Melinda, she is conniving, overtly sexual, and intentionally hurtful.  It seems as if she actually “gets off” on sensing Vic’s disappointment and wrath.  Talk about dysfunctionality at its finest…Vic and Melinda should be the poster children for unhealthy relationships.  She easily teases and manipulates him as, like a little puppy, he begs for scraps.

There is a delicate balance between Melinda and Vic, and at any point, power tends to shift to one or the other of them.  It seems as if Vic, who loves Melinda, has the money giving him an unfair advantage over her yet she can evoke a variety of emotions from him by a simple glance or touch.  Watching Deep Water is equivalent to driving past a bad car accident.  You don’t want to look but you simply can’t turn away.  These two individuals are demented and seem to enjoy torturing each other as much as possible.  Sort of makes the rest of us seem fairly normal in comparison.

While Affleck and de Armas do a very good job with the material they have been given, the script is somewhat all over the place and Lyn’s direction does nothing to sort it all out.