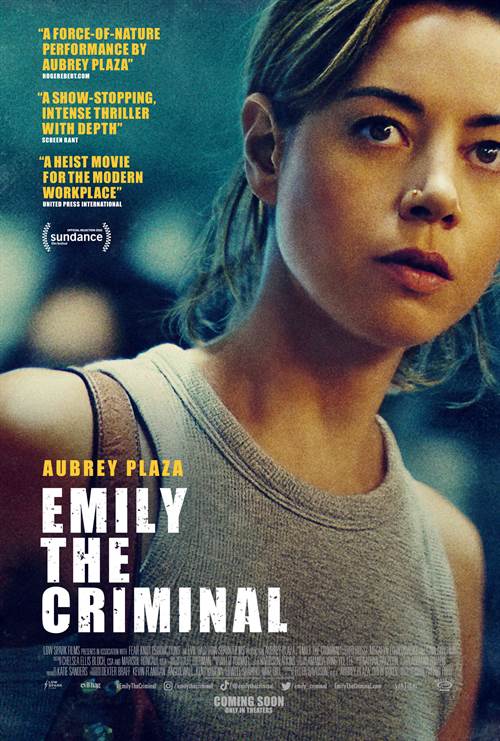 Emily (Aubrey Plaza) is saddled with student debt and locked out of the job market due to a minor criminal record. Desperate for income, she takes a shady gig as a "dummy shopper," buying goods with stolen credit cards supplied by a handsome and charismatic middleman named Youcef (Theo Rossi). Faced with a series of dead-end job interviews, Emily soon finds herself seduced by the quick cash and illicit thrills of black-market capitalism, and increasingly interested in her mentor Youcef. Together, they hatch a plan to bring their business to the next level in Los Angeles.

Stream Emily The Criminal in Digital HD/4K from the AppleTV store.

Emily The Criminal images are © Roadside Attractions. All Rights Reserved. 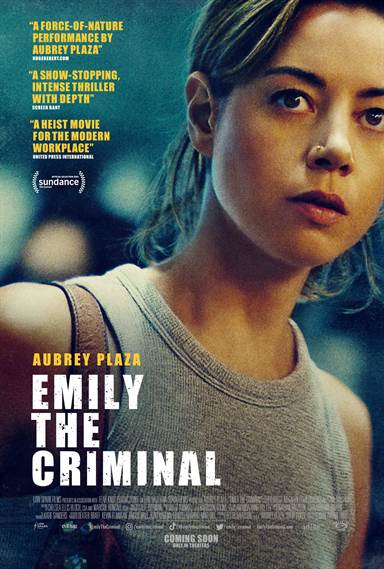 Every now and then a small picture comes around that resonates with a big impact. You would think it would happen more often because, there are so many newbie filmmakers making so many first films these days, that some would hit the mark, but they don’t. I can’t recall a single film in the last year that came anywhere near the quality, impact, and pure storytelling that EMILY THE CRIMINAL does.

There’s something about this film that will grab you in the beginning and slowly wind you up to a whirlwind ending. Whether it’s the casting, or the acting, both of which are superb here, or the tight visual images, or the intricate plotting, the film somehow captures that magic that makes great movies.

As thrillers go, and I would classify this as a thriller, it’s so immediately tied to the problems currently plaguing our youth that the ring of authenticity shines through the filmmaking like a glimmering signpost of very real people silently begging for hope.

Saddled with enormous student debt and everyday living expenses Emily (Aubrey Plaza) is unable to find a decent-paying job because of a minor criminal record. So she works as a part-time delivery person barely able to keep her head above water.

When a co-worker suggests that she take a shady job as a “dummy shopper,” buying goods with stolen credit cards, she is hard pressed to turn it down. The scheme is run by a charismatic middleman named Youcef (Theo Rossi) who sends her on her first excursion into the dark side. She soon finds herself seduced by the quick cash and illicit thrills, and increasingly interested in her mentor Youcef. What happens next will keep you glued to your seat until the end.

As to the highlights of the film, Aubrey Plaza, whom you may know from “Parks And Recreation,” turns in a brilliant, totally realistic performance. It’s stunning to watch her go from drowning semi-innocent girl to “kickass criminal” afraid of nothing and out to get her share of the big enchilada. Theo Rossi, best known for his role in “Army of the Dead,” creates a surprisingly compelling performance as the likable “bad guy” who takes his eye off the ball long enough to let Emily in. First-time feature Director John Patton Ford shows the talent of a seasoned director, putting the camera where it belongs while never interfering with the performances, not an easy task.

My take... You should just sit back and take in “EMILY THE CRIMINAL.” You’ll find it one big exciting ride from start to finish.