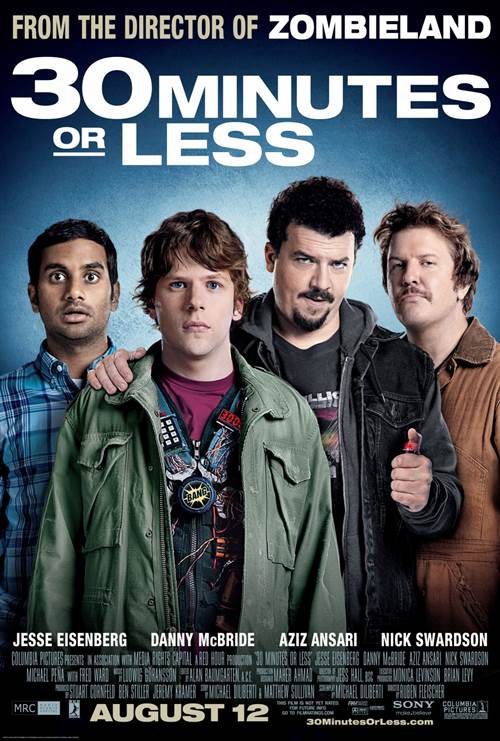 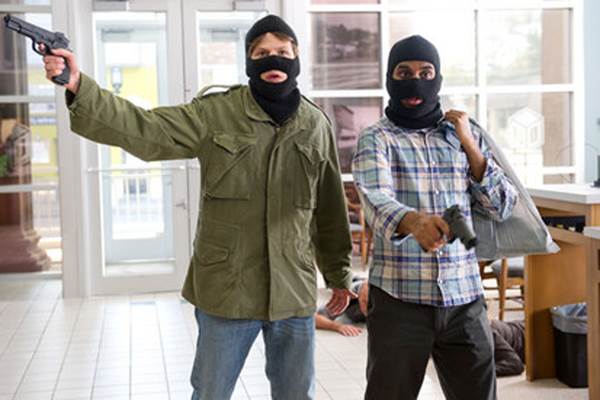 30 Minutes or Less centers on a junior high history teacher (Ansari) and a pizza-delivery man who are forced to rob a bank when one of them is strapped to a bomb vest. (McBride is one of the men looking to score some cash.) Pena will play a tatooed assassin, while Swardson will play McBride's best friend.

Stream 30 Minutes or Less in Digital HD/4K from the AppleTV store.

30 Minutes or Less images are © Columbia Pictures. All Rights Reserved. 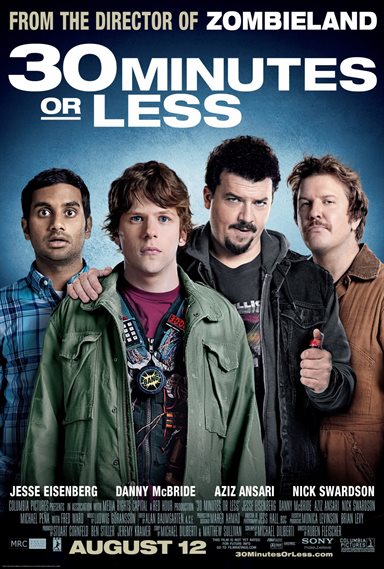 When it comes to comedies the simplest plot device is the easiest one. When you look at films like Harold & Kumar, Pineapple Express, or The Hangover you can see how a simple scenario can become fodder for uproarious hilarity. That being said, it doesn't always work out that way and in the case of 30 Minutes or Less we are left wanting more.
The film stars Jessie Eisenberg as Nick, a hapless loser who hates his job which just so happens to be working as a pizza delivery guy. This involves driving like a maniac to make each "run" in 30 minutes or less. He doesn't get much sympathy from his best friend, Chet (Aziz Ansari) who looks at Nick's sad life and feels like much more vindicated in his own meager accomplishments. As friends go for most movies, they really have nothing in common except for the fact that they are written as best friends, so we as an audience must accept this as so.
Over the next 24 hours however their lives are about to become a lot worse. Over in the "bad" side of town two similar mismatched buddies Dwayne and Travis (Danny McBride & Nick Swardson) are trying to come up with a way to make some cash fast. You see Dwayne a sizeable inheritance from his father; once his father passes away of course and this isn't happening anytime soon. An exotic dancer (Bianca Kajiich) talks Dwayne into taking a hit out on his father, but of course he doesn't have that kind of money. So Dwayne and Travis come up with the ludicrous idea of kidnapping a stranger, strapping a bomb to his chest and forcing him to rob a bank for them or they will detonate the bomb.
This is where Nick comes in; following an order placed by Dwayne, Nick becomes their unwitting victim in this insane plot. Dwayne gives Nick 10 hours to accomplish this task, and of course Nick turns to his only friend, Chet. After some initial confusion Nick convinces Chet that this isn't a prank and they set out to commit the crime of the century. One of the funnier scenes in the film takes place when Nick and Chet go shopping for supplies while trying not to attract attention.
With a run time of only 83 minutes it isn't long before the robbery is underway and while it does have a few chuckle worthy moments, it doesn't really bring about the gut busting laughter you hope it would. The experience turns out to be a bonding moment for the duo who have been on uneasy terms since Chet found out that Nick hooked up with his twin sister (Dilshad Vadsaria). As far as female characters go, there aren't many in this film, most are just objectifying fodder for the other male characters of the film.
The best performance in the film comes from McBride, who has perfected his white-trash buffoon character to a level that when you finally witness it on screen you can't help but feel sorry for Swardson's helpless accomplice. Meanwhile Eisenberg doesn't really do much here other than regurgitate past character's twitchy mannerisms and blending them into a new one so we are supposed to think it is fresh. Ansari has gained a name for himself on the faux reality show Parks & Rec, but here his grating shouty shtick only serves to make him more annoying, even if it is endearing to see how loyal he is to Nick by refusing to abandon him.
The film is directed by Ruben Fleischer who also directed Eisenberg in Zombieland, but with a different writer manning the script we lose the natural flow of humor that came with their previous effort. There is a clear problem with the pacing of the action sequences yielding very clumsy car chases that wind up focusing more on music and the over exaggerated expressions of its actors.
As comedies go 30 Minutes or Less isn't much to get excited over, leaving the audience with an unsatisfied feeling by the film's finish.