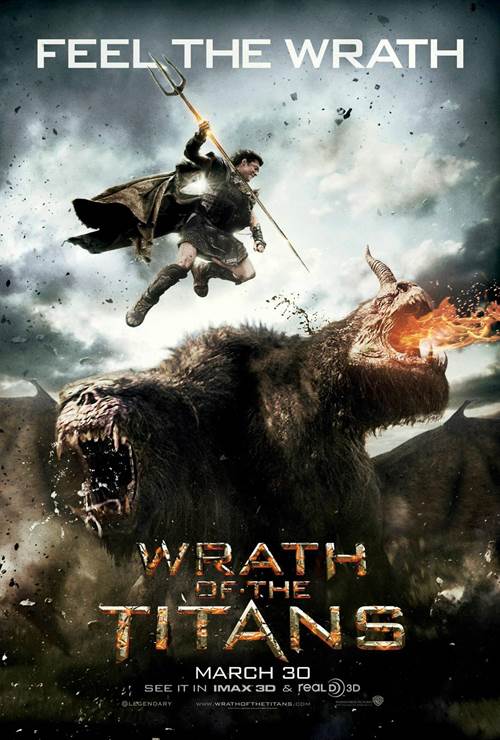 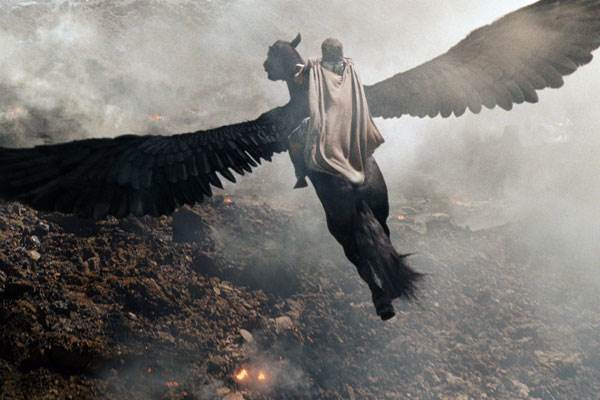 A decade after his heroic defeat of the monstrous Kraken, Perseus (Worthington) --the demigod son of Zeus (Neeson)--is attempting to live a quieter life as a village fisherman and the sole parent to his 10-year old son, Helius. Meanwhile, a struggle for supremacy rages between the gods and the Titans. Dangerously weakened by humanity's lack of devotion, the gods are losing control of the imprisoned Titans and their ferocious leader, Kronos, father of the long-ruling brothers Zeus, Hades (Fiennes) and Poseidon (Danny Huston). The triumvirate had overthrown their powerful father long ago, leaving him to rot in the gloomy abyss of Tartarus, a dungeon that lies deep within the cavernous underworld. Perseus cannot ignore his true calling when Hades, along with Zeus' godly son, Ares (Edgar Ramirez), switch loyalties and make a deal with Kronos to capture Zeus. The Titans' strength grows stronger as Zeus' remaining godly powers are siphoned, and hell is unleashed on earth. Enlisting the help of the warrior Queen Andromeda (Rosamund Pike), Poseidon's demigod son, Argenor (Toby Kebbell), and fallen god Hephaestus (Bill Nighy), Perseus bravely embarks on a treacherous quest into the underworld to rescue Zeus, overthrow the Titans and save mankind.

Purchase DVD/Blu-ray/4K UHD physical copy of Wrath of the Titans today at Amazon.com

Download Wrath of the Titans in Digital HD/4K from the iTunes store.

Wrath of the Titans Blu-ray Review 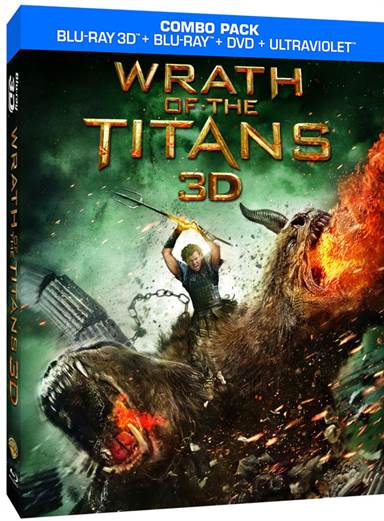 Louis Leterrier's Clash of the Titans arrived to negative reviews, divided audiences, and set off a much discussed 3D. Warner cleaned house for the sequel. New director, new screenwriters, new beasties, and a leaner, meaner tale. But is this version/sequel any better? In some ways, yes -- the performances are certainly better, the dialogue sharper and the stakes higher -- in other ways, no. Despite its grander scale, the sequel's story and settings somehow feel smaller, its creatures and monsters aren't nearly as compelling or frightening and its battles, showdowns and clashes are straight out of a videogame. The results are more refined, more commendable even. But stronger? Smarter? More agile? More deadly? Don't set your expectations too high. Wrath is just another dose of big, dumb mythological fun.

It's been ten years since Perseus (Sam Worthington), the son of Zeus, slew the mighty Kraken and saved Princess Andromeda (Rosamund Pike) from certain death. Ten years since Perseus declined the throne, rejected Zeus' invitation to Olympus, and made the decision to live a secluded life as a fisherman, raising his young son Helius (John Bell) away from the world of gods and monsters. Perseus is forced out of retirement, though, when Hades (Ralph Fiennes) strikes a deal with Ares (Edgar Ramirez), captures his brother Zeus (a softer, gentler Liam Neeson), and sets out to free their father, the titan Kronos. It seems that the gods are quickly losing their power and immortality, and the walls of Tartarus are falling. Rather than contend with Kronos in a weakened state, Hades instead forges an alliance with the imprisoned titan, agreeing to transfer Zeus' life force to Kronos in exchange for his life and a little slice of the planet. It doesn't take Perseus long to respond. With Andromeda and the demigod progeny of Poseidon (Danny Huston), Agenor (Toby Kebbell), at his side, the reluctant warrior sets out to find the fallen god Hephaestus (Bill Nighy), enter the Labyrinth of Tartarus, and obtain the three pieces of the Spear of Triam, the only weapon with enough power to kill a titan.

Perseus may be a tortured soul but his compliance with fate is never in doubt. He hems, he haws, he gets a visit from Zeus, kills a Chimera, chit-chats with Poseidon, and puts together a checklist of items and allies he'll need to defeat Kronos. He's even given Poseidon's trident to start his adventure. So it comes as little surprise when -- mild spoilers ahead -- he bids farewell to his son, hops aboard his trusty Pegasus (who's apparently spent the last ten years nearby, just waiting for its master's whistle), and makes a beeline for Andromeda's war camp to form a band of heroes. With a wily rogue and fierce warrior queen joining his party, Perseus' attack stat increases by four, his health increases by six and his magic increases by nine. Eventually, having gone toe-to-claw with a few tough mini-bosses (a Cyclops clan, a semi-sentient maze, a snarling minotaur, and god of war Ares himself), he collects all the pieces he needs to construct his super titan-slayer. Then it's off to Kronos, where Perseus has to fly through a sandstorm, dodge lava showers, giant fists, and massive shock waves to attack, no joke, the bright, orange weak spot that is the towering Big Boss's mouth. A pair of gods help from the ground, firing blasts of energy to provide an opening, while Perseus' rogue and warrior queen hack-n-slash their way through dozens of fiery, duel-torsoed minions wielding stone swords.

If you've played one of the God of War games, or any of the men-vs-the-gods RPGs and actioners that decorate the hallowed halls of 8, 16 and 64-bit history, watching Wrath of the Titans will be a lot like watching someone pound, scream and button-smash their way through a videogame. A decent videogame, mind you, but a videogame all the same. There are weapon upgrades, attack patterns, distinct levels, defensive spells, items to collect, helpful NPCs itching to aid Perseus on his quest... the parallels are unmistakable.

Most everything else is improved. Worthington pulls off a noteworthy performance for once, even though he's essentially playing yet another thinly veiled archetypal hero. Neeson and Fiennes are given more to do this time around as well, Pike is far more capable and convincing than Davalos, Ramírez is a suitably sinister foe, Kebbell is a charming ruffian, and Nighy is always welcome. Dan Mazeau and David Leslie Johnson's screenplay helps, of course. Gone are (most of) the cringe-inducing exchanges and one-liners, gone are the cheap jabs at the original 1981 film (Bubo returns, but in a more respectable capacity), gone are the extraneous gods, gone is the episodic adventuring, gone is the malaise that plagued the sequel's 2010 predecessor. With more to gain, more to lose, and three or four layers of father-son abandonment drama to chew through, Worthington, Neeson, Fiennes, Kebbell and Ramírez are able to sink their teeth into meatier material. And Liebesman? He bests Leterrier where it counts -- storytelling, character development, and tone -- and only comes up short when action erupts.


Now Wrath of the Titans finds its way to DVD. Hardly a scene goes by that doesn't fill the air with sand, dirt, mist, debris, smoke or bursts of flame, and yet the presentation isn't plagued by significant noise.
Wrath of the Titans' most vicious mythological monsters stand clear and do so with more finesse than the film's mightiest gods and warriors. The audio quality is superb, allowing the viewer to practically feel a part of the movie from start to finish.
Now for those special features: Maximum Movie Mode (HD): Choose from two different Maximum Movie Mode experiences: the Path of Gods, where you'll learn about the mythology behind Wrath of the Titans, and the Path of Men, where you'll go behind-the-scenes to see how the production team developed and created Perseus' world, comrades, enemies, creatures and battles. You can also switch back and forth between the two experiences as you go, making for a more interactive, choose-your-own-adventure Maximum Movie Mode than you might be accustomed to. The Maximum Movie Mode's Focus Point featurettes are also available from the main menu. Segments include "Battling the Chimera," "Agenor: The Other Demi-God," "The Cyclops Fight," "Prison of the Titans," "Minotaur: The Human Nightmare," "The Heavens Raise Hell on Earth," "Who Are the Titans?," "Hephaestus: God of Fire," "Lost in Tartarus' Labyrinth" and "Creatures of the Titans."
Deleted Scenes: Three unfinished deleted scenes, only one of which -- "Zeus is Led Past Missing Olympians" -- should have been polished and kept in the film's final cut.

Wrath of the Titans improves upon Clash of the Titans in some ways but still falls short. The performances and script are better, but the visual effects, creature designs and monster battles are ripped from videogames and, perhaps more distressingly, feel as if they have been. At least audiences will agree on the quality of Warner's Blu-ray release. While a bit slim in the supplemental department, the sequel's video is outstanding and its audio track is a full-force knockout. If you enjoyed Clash of the Titans, you'll certainly enjoy Wrath.

Wrath of the Titans available on Blu-ray Combo pack, DVD and for download 6/25!