Agents J (Will Smith) and K (Tommy Lee Jones) are back... in time. J has seen some inexplicable things in his 15 years with the Men in Black, but nothing, not even aliens, perplexes him as much as his wry, reticent partner. But when K's life and the fate of the planet are put at stake, Agent J will have to travel back in time to put things right. J discovers that there are secrets to the universe that K never told him - secrets that will reveal themselves as he teams up with the young Agent K (Josh Brolin) to save his partner, the agency, and the future of humankind.

Download Men in Black III in Digital HD/4K from the iTunes store. 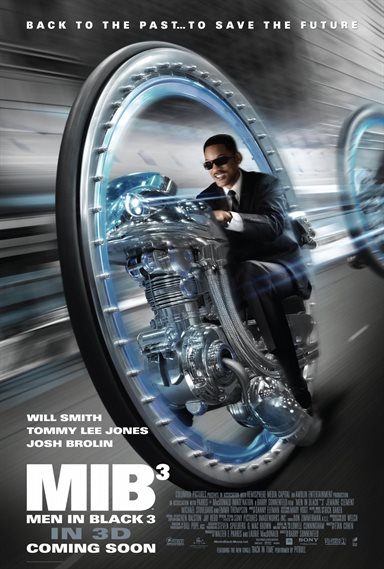 After squirming in my seat trying to get more comfortable several times I began to realize that there's something wrong with Men in Black 3, it drones, creating a lackadaisical mood that destroys any comical stimulus.  That said, the film however reeks with plot, silly alien characters and amazing guns and gadgets.  But, the glitz and glitter aren't enough to carry the third edition of the single film winning franchise.

Check in with friends to Men in Black III with the Movie Clock app. Get it now for FREE!

In this episode of the alien fighting special government bureau we find K (Tommy Lee Jones) and J (Will Smith) going about their business breaking up alien trafficking, busting illegal ‘space alien' businesses and covering up their findings using the neuralyzer.  In the meantime the dastardly Boris the Animal (Jermaine Clement) busts out of the intergalactic prison where he has been for the last 40 years following capture and dismemberment by K back in the 1960's.

Returning to Earth, Boris wants revenge and he uses a special time-travel gadget to get him back to the time where he had the run in with K.  His intention is to kill K before he gets his arm cut off and captured so he will be whole again to take over Earth.  When J finds out that K has gone missing he finds a way to time-travel a day earlier in an attempt to save K.

Smith and Jones are on their mark with reenacting the two memorable characters from Men in Black 1, but the retread quickly becomes weak and repetitive rather than fun and edgy.  Sure you may say that when creating a sequel the characters should be the same, but that's not the problem here, it's seeing them do the same old things.  The memory erase gadget gets overused, the aliens predictably get splattered all over the place, too many repeat one liner gags from episodes one and two that bring about yawns and the comedic chemistry that made the first one great is just not there.

As far as the production quality, if you are going to see the film, upgrade your experience with 3D.  MIB3 plays it's best with some ‘coming at ya' excitement that enhances the film with jaw dropping special effects.  Other suggestions include a good night's sleep the night before, a cold drink by your side, wacky friends that will laugh at anything and a wallet full of bucks to burn.

The film is rated PG-13 by the MPAA for sci-fi action violence, and brief suggestive content.  The science fiction violence should not be a problem for the tweens if they are gamers.

FINAL ANALYSIS: For fans of the MIB series, you may want to wait for the Blu-ray. (D)