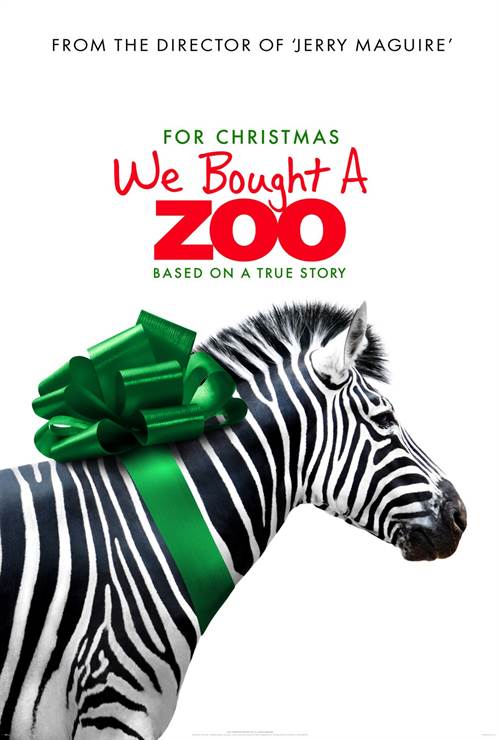 We Bought A Zoo Synopsis

Benjamin Mee (Damon) is a Los Angeles newspaper columnist and adventure writer who, as a single father, faces the challenges of raising his two young children. Hoping that a fresh start and a new life will restore their family spirit, Mee quits his job and buys an old rural house outside the city with a unique bonus feature: a zoo named the Rosemoor Animal Park, where dozens of animals reside under the care of head zookeeper Kelly Foster (Johansson) and her dedicated team. With no experience, limited time and a shoestring budget, Mee sets out with the support of his family and the local community to reopen the zoo. Now, Benjamin is no longer reporting an adventure story; he’s living it in his own backyard.

Purchase DVD/Blu-ray/4K UHD physical copy of We Bought A Zoo today at Amazon.com

Stream We Bought A Zoo in Digital HD/4K from the AppleTV store.

We Bought A Zoo images are © 20th Century Fox. All Rights Reserved.

We Bought A Zoo Blu-ray Review 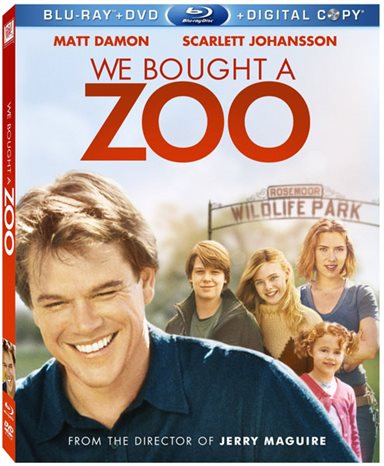 We Bought a Zoo is located at the intersection of Feel Good Road and Predictable Lane. Matt Damon saps it up as the father who means to do well by his two children after their mother passes, but is hounded by impossibly over-the-top government bureaucrats, teenage angst, and Scarlett Johansson. Scratch that, that last one is actually a good thing.

In actuality, Benjamin Mee, whom Damon plays here, was looking for a new house so his mother could stay out of a nursing home, not because his wife died. But, a dead wife plays better on screen, so the writing team tweaked some things. That's expected, forgivable, and tradition for true stories, although not so much when the script is produced purely to capitalize on known formulas.

Taking away the zoo, which here is utilized to create forced conflict rather than genuine emotion, even Lifetime would not have taken on this story for its sappyness. Zoo is marketing 101, a family-oriented "go home happy" piece released right as families get together for the holidays. Bear in mind that it was released to theaters two days before Christmas in 2011. It fits the typical studio release mold.

There is genuine fun to be had with the routine crew of zoo keeper misfits, from the love interest to the short-fused designer who wants nothing more than to punch their assigned USDA inspector. That ragtag bunch pops up whenever the film needs to generate a smile, or it just asks young Maggie Elizabeth Jones to say, "We Bought a Zoo!" Actually, everyone does that, if not always with the same child-like charisma.

Financial constraints burden all as the team nears a re-opening. Damon and co. seeking a reprieve from a city that reminds them of a lost mother and wife at every turn. Constant reconsideration of what he has led his family into notwithstanding, it pushes the family into a tighter, functional unit. Teenager Dylan (Colin Ford) has Lily (Elle Fanning) to help him through once he ditches the attitude, a plot thread that becomes obvious the second she appears on screen through a window. Johansson's role is no less apparent.

Between it all are a bunch of animals used as cut-aways for transitions, an emotional end of life cycle, and the beginning of another. The sanctuary is loaded with varied wildlife, giving the cast something else to focus on besides each other, even if the critters always feel like a background event, visually and in the narrative.

Zoo's final sin is forging ahead with peppy one-off characters, like a Home Depot employee who, shocking to no one, props up the closing moments like a ray of sunshine with her instant like-ability. The film couldn't possibly fail with a cliché like that, especially backed by an admittedly pleasing, moving score. It's hard not to feel something here, even if you're aware that it's manipulation from the word go.

Now on Blu-ray, any families looking to return to that odd mammalian mix will only have to pop the disc into the players. With the added bonus of Blu-ray, the video quality flourishes here. And the same goes for the audio as well, bringing the mighty roar of the bear right into your living room.

We Shot a Zoo is the heart of it all though, a 75-minute, five part behind-the-scenes piece with wonderful production value and honest interviews. The Real Mee tells the true story with Benjamin Mee himself recalling how everything came about. Their Happy is Too Loud details a scoring session and with all of the artistic merit provided by the other pieces. A photo gallery is worth a peek even if you usually skip them and finally Fox rounds it up with trailers and BD-Live.

So while the film itself may be a lackluster event for those of us who lack children, all the families out there will be quite happy with this final product.