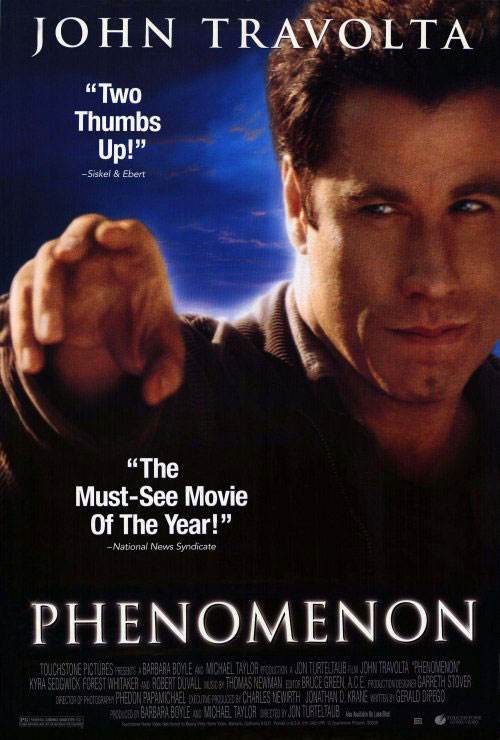 Academy Award nominee John Travolta (Best Actor, 1994, Pulp Fiction) leads a stellar cast, including Kyra Sedgwick, Forest Whitaker, and Robert Duvall, in this uplifting story of an ordinary man transformed by extraordinary events. On the night of his 37th birthday, George Malley (Travolta) is knocked to the ground by a mysterious, blinding light and develops amazing mental abilities. With his newfound knowledge, George astounds everyone in town, but comes to realize that his wondrous experience has changed him and all those around him forever.

Stream Phenomenon in Digital HD/4K from the AppleTV store. 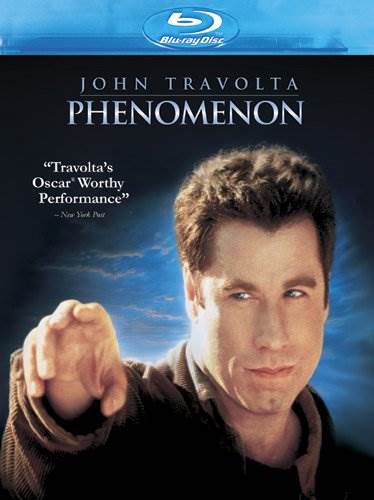 In 1994 John Travolta was rescued from the Look Who's Talking sequels when Pulp Fiction reminded everyone of the unique magnetism with which he could invest almost any character. For the next six years—that is, until Battlefield Earth put some doubt in our minds—Travolta racked up one success after another, if not always financially, at least artistically. Get Shorty, Broken Arrow, Face/Off, Primary Colors and A Civil Action were all released during this period. So was Phenomenon.

Today director Jon Turtletaub is best known for loud, action fare made with Nicolas Cage, namely, the National Treasure series, of which a third is rumored to be in the works, and The Sorcerer's Apprentice. But in the early Nineties, Turtletaub's signature talent was for directing sentiment with just enough bite to keep it intriguing. He did it for the early Sandra Bullock hit, While You Were Sleeping and in Phenomenon, Turtletaub directed Travolta in a twist on the kind of role that had won Cliff Robertson an Oscar in Charly (1968): that of a man suddenly granted intelligence far beyond the norm (though, unlike Robertson's character, Travolta's began as an ordinary guy, rather than a mentally challenged subject of a drug trial).

But the script for Phenomenon pulls a fast one, and not because it plays mysterious with the source of small town mechanic George Malley's new abilities. As the story unfolds and George's intelligence continues to grow, the story shifts the emphasis to George's emotional life. George's abilities don't take him into a new world so much as drive him to burrow deeper into the world he already knows and loves. He stays in the same town, keeps the same friends and loves the same woman. Getting smarter ultimately leads George to a deeper understanding of who he has always been, so that, in the end, Phenomenon becomes less a science fiction story about an inexplicable event than a morality tale about the importance of taking a fresh look at familiar things.

George Malley (Travolta) has lived all his life in the Northern California town of Harmon, where he runs a garage and grows vegetables in his spare time. His best friend is a local farmer named Nate Pope (Forest Whitaker), and the closest person George has to family is the town physician, Doc Brunder (Robert Duvall), who delivered him. George carries a torch for a recent arrival in Harmon, Lace Pennamin (Kyra Sedgwick), a divorced mother of two young children, who makes chairs in a home workshop and sells them in the flea market attached to George's garage. But Lace wants no complications in her life and keeps pushing George away.

After a party celebrating his 37th birthday in the local bar owned by Jimmy (Michael Milhoan), George staggers out into the street and sees a bright light in the clear night sky that knocks him on the ground. In the days that follow, George is transformed. He stops sleeping, reads several books a day, learns new languages in an hour or less, beats Doc Brunder repeatedly at chess after having just learned the game, and begins constructing inventions that range from a miracle fertilizer to an automobile powered by alternative fuel. He's also able to feel the vibrations preceding earthquakes without seismic equipment, and he develops powers of telekinesis, which he eventually explains as "cooperation" between his atoms and those of the object being moved.

The essential story of Phenomenon isn't so much the source of these powers (which is partly though never fully explained), but the different effects they have on both George and those around him. George is a good-hearted soul with an intense curiosity about the world; his new abilities allow him to investigate subjects that previously he could only begin to comprehend, and he does it for nothing other than the love of exploration. "He wasn't selling anything! He didn't want anything from anybody!" says Doc Brunder, scolding a group in Jimmy's bar trying to dismiss George's accomplishments as trickery. Theirs is typical of the general reaction to George as some sort of threat, either because of superstition, conspiracy theory or, in the case of government agencies, a demonstrated ability to crack top-secret encryptions (something George unwisely does for the sheer challenge). The scene in which the government attempts to measure George's abilities would be funny enough as written, but it gains an additional comic frisson from the fact that the examiner is played by Brent Spiner, best known as Star Trek: TNG's walking computer, Mr. Data, whom one could easily imagine in George's seat.

The real story of Phenomenon plays out through George's relationships with the people who don't treat him differently once he acquires new abilities. Doc Brunder remains concerned for George's well-being, but once he gets over the shock, he still sees the same person; he even takes a child-like delight in George's telekinetic abilities, probably because he trusts the man who has them. Nate remains George's best friend, even when George's abilities as a farmer rapidly outstrip Nate's; Nate calls it "embarrassing", but there's no envy in his voice. These two are friends because they're kindred spirits, both innately generous. Indeed, George devotes his new-found skills to making a match for the shy Nate with Ella (Elisabeth Nunziato), a recent arrival from Brazil, who George senses would be an ideal soulmate. (The scenes should play as hopelessly contrived, but somehow Travolta, Whitaker and Nunziato manage to sell them.)

The most intriguing of George's "constant" relationships is with Lace Penniman. In a different film, their path toward one another, with its turns and obstacles, would be the stuff of a formulaic romantic comedy, but George's transformation also transforms the formula. It's clear these two are meant for each other, and that Lace knows it; why else would she devote so much energy to avoiding a good-looking, eligible, decent single man? The change in George forces Lace to recognize that opportunities do not wait forever—"Everything is on its way to somewhere", as George says late in the film—and she's relieved when, after a few false starts, she finds that the good man she thought she knew is still there. As for George, when the government shuts down his various projects, and a world-renowned doctor (Richard Kiley) wants to "help" him in ways that don't necessarily serve his interests, George seeks refuge with someone he knows he can trust: Lace.

It's on Blu-ray for the first time now and like all things Blu-ray, it only adds to the viewing experience. Surprisingly there are no bonus features to speak of. Perhaps given time there will be a more expansive presentation.

The story of Phenomenon can't be resolved with such a powerful intelligence left functioning in the world. What's notable about Travolta's performance and Turtletaub's direction is their refusal to wallow in sentiment at the film's conclusion. More tears have been shed at the end of It's a Wonderful Life than will ever fall before the credits roll on Phenomenon. The film exits with the same innocent dignity that is characteristic of its protagonist.