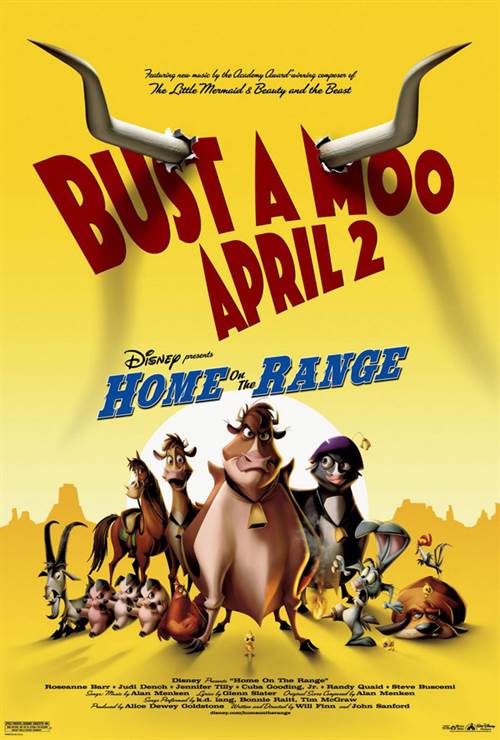 Home On The Range Synopsis

A family farm inhabited by a widow (Dench), her young daughter, and various sundry farm animals. The widow owes $1,000 mortgage on the farm and has no way to pay for it, and the cows get wind of the trouble. Fearing that they'll be sold to the local meat-packing plant, the cows seek to find a way to earn the money.

Purchase DVD/Blu-ray/4K UHD physical copy of Home On The Range today at Amazon.com

Stream Home On The Range in Digital HD/4K from the AppleTV store.

Home On The Range images are © Walt Disney Pictures. All Rights Reserved.

Home On The Range Blu-ray Review 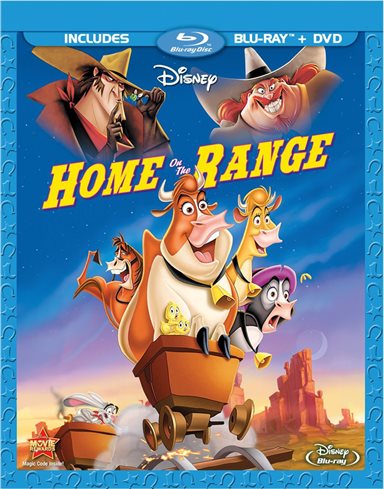 For Walt Disney fans, the years following the Disney Golden Age -- which began in 1989 with The Little Mermaid and, by most accounts, ended in 1999 with Tarzan -- was a nightmare. Fantasia 2000 underwhelmed, Dinosaur disappointed, Atlantis arrived to mixed reviews and declining box office returns, Treasure Planet was anything but, and Brother Bear was the same old story. Which brings us to Home on the Range. Quality was in a frightening freefall, each new animated adventure seemed to lack more and more of that patented magic, and the studio that gave birth to the animated feature was now headed in the CG direction via Pixar.

So let's begin then, the mistakes are many, and only become more frustrating as Home on the Range rambles along. But it all really boils down to three easy-to-spot problems: fundamentals, fundamentals, and fundamentals. The story -- three bickering dairy cows (Roseanne Barr, Jennifer Tilly and Dame Judi Dench) set out to track down a notorious cattle rustler (Randy Quaid) in an attempt to save their farm from foreclosure -- is all at once overly convoluted and overly simplistic. The characters are mismatched, mismanaged and miscast, and only a select few are likable. The performances range from adequate to irritating, with Gooding Jr. and Dennis again stealing the show, and the songs, slapdash as they are, don't help. Nor does the talking animals' dialogue, which is cringe-worthy as written and downright grating as improvised. Barr is obnoxious to the point of dragging down the already sub par film, Tilly delivers dimwitted a bit too well, Dench is out of her league for perhaps the only time in her career, Quaid's voice is little more than a dead ringer for Johnny Depp's, and most every other chatty farm animal, bumbling cattle rustler, sinister city slicker, and well-meaning cowpoke gets lost in the crowd.

Say what you will about The Princess and the Frog, Disney's much-publicized 2009 return to traditional animation. It was both rooted in the studio's sweeping classics of yesteryear and built to prove that hand-drawn animation, when paired with an absorbing tale, still deserved a seat at the animated feature film table. Say what you will about gems The Emperor's New Groove and Lilo & Stitch. Both offer an assortment of endearing heroes, villains and creatures, and both earn genuine laughs and cheers.  Home on the Range, though, is little more than an afterthought; one that comes across as a direct-to-video shoulder-shrug. It doesn't build on what came before, represent a fitting farewell to hand-drawn animation, or put up much of a fight for the continued relevance or survival of the art form. It doesn't stir the heart or smack the funny bone, it doesn't stir up any strong emotions, and barely crawls across the finish line. And it certainly doesn't draw animation fans, young or old, into a fully realized Western wonderland or take them along on a wild ride. It merely runs through the motions, slinking toward the credits as if its days were already numbered when it began.

With all that said, Disney has surprisingly released it on Blu-ray, perhaps for those few fans who found it entertaining, or for those parents who want a truly non-threatening film to plop their kids in front of. Whatever the reason, you can't fault Disney for their production of the dvd, because it does transfer well to the small screen with solid video and audio quality. Even the bonus features are more than what you would expect for this tale: Audio Commentary from Producer Alice Dewey and co-writers/co-directors Will Finn and John Sanford; Trailblazers: The Making of Home on the Range; an Art Review; some Deleted Scenes; an animated short narrated by Judi Dench; a music video; a lesson on how to yodel; and lastly a short featuring some random jokes.

Home on the Range isn't just the product of a once failing traditional animation production house, it's just a bad film. Should Home on the Range be added to your collection? That depends on whether or not you're a Walt Disney completist. If so, prepare to grin and bear your way through a middle-of-the-road Blu-ray release. If not, it's best to move on past this one.