Home / Movie Database / Won't Back Down 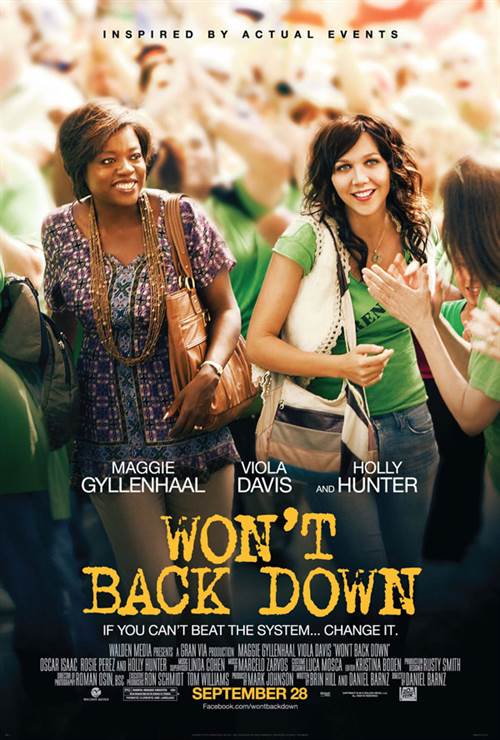 Won't Back Down Synopsis

In this powerful story – inspired by true events – of parenthood, friendship, hope and courage, Maggie Gyllenhaal and Viola Davis portray determined mothers  who will stop at nothing to transform their children’s failing inner city school. Facing a powerful and entrenched bureaucracy and a system mired in traditional thinking, they risk everything to make a difference in the education and future of their children.

Purchase DVD/Blu-ray/4K UHD physical copy of Won't Back Down today at Amazon.com

Stream Won't Back Down in Digital HD/4K from the AppleTV store.

Won't Back Down images are © 20th Century Fox. All Rights Reserved.


Enter for a Chance to win a Blu-ray copy of Won't Back Down  1/10/2013 8:43 AM EST
OSCAR® Nominees Maggie Gyllenhaal and Viola Davis* lead a stellar cast in this rousing drama inspired by actual events is arriving on Blu-ray Combo Pack and DVD January 15!In order to win your very own copy of  Won't Back Down on Blu-ray, simply follow FlickDirect on Twitter,  Google+, or Pinterest, and email your information to contest@flickdirect.com with your mailing address, and qualifying a p...  More>>

Won't Back Down Blu-ray Review 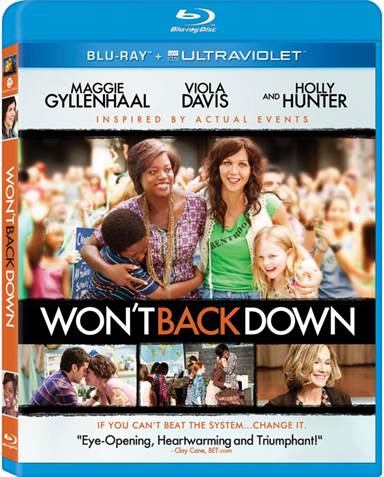 The inspirational film Won't Back Down is now available on Blu-ray.  Taking the fight for better education to the classroom this story based on actual events postulate what determined teachers and parents can accomplish if they work together.  The movie has all the trappings of a good feeling winner with Oscar nominated actors Maggie Gyllenhaal and Viola Davis and a script that plays out with determination.

The movie opens with Malia a young second grader trying to read a word off the blackboard while the rest of the class is being disruptive.  The uncaring teacher prods the girl along giving some of the other kids a chance to laugh at the pathetic sight. Up in arms Malia's mother Jamie Fitzpatrick (Gyllenhaal) tries to remedy her daughter's negative day by trying to get her changed to another classroom but she's unsuccessful.  With her back to the wall and boggled by union policies in regard to the floundering teachers, she finds out that there's another way to skin a cat involving the takeover of the school by the school board with enough signatures on a petition.  So starts Jamie's story of a labor intensive journey to save her failing elementary school and make a difference to the community.

The acting here is quite good with Gyllenhaal putting on a good show as the strong-minded stop at nothing mother that will do anything for her child.  She makes her Jamie a crusader and a hero of sorts with those that are ready for change.  This is where Viola Davis as committed good teacher Nora Roberts comes in support of the cause.  Davis works hard with her character drawing a good bit of sympathy and showing the other side of the coin on what a good instructor can accomplish if given the chance.

Director Daniel Barnz, who also wrote the story for the film, keeps his characters extremely mechanical pushing the objective without question in the faces of his audience.  And he succeeds with showing what one community can do to better the educational system if you are committed and unrelenting. He gets his viewers charged up and cheering as I found myself doing, much like in the movie The Help.

There are downsides to film's like Won't Back Down and that being whether it can be replicated in other communities, whether unions will comply, changing the apathy of teachers and administrators and a whole lot more in order for it to work in our a nation as a whole.  This is one small step, but who will come forward to lead the country out of the dismal educational dilemma America has been experiencing.

The film has some interesting bonus features with some eye opening comments on education.

BONUS FEATURES
"Audio Commentary with director Daniel Barnz" You can turn on the commentary where Barnz explains the talks about his production, the crew and the script. If you like commentary with the film, Daniel's is actually pretty good.
"Deleted Scenes with Director's Commentary" Of the six deleted scenes I found at least half could have been kept in the film.
"A Tribute to Teachers" Daniel Barnz, producer Mark Johnson, and several stars including Viola Davis and Maggie Gyllenhaal talk about the teachers they had in school.
"The Importance of Education" I was surprised that they only devoted about 5 minutes to this feature since the subject of educational reform has been a hot topic for years with no real answers.  It may have been better if they found some spokespersons in the field to add some credibility to their discussion.
Inside the box are your instructions and code to access the Ultraviolet download of the film so you can stream or download to your computer, TV, tablet or Smartphone.

The sound quality of the film with the DTS-Master Audio 5.1 played through my HD television is terrific.  The clarity of sound had no distortion and the dialog easily understood.  My surround system also picked up the intended side talk and sound effects coming from the sides.

The presentation of film with the aspect ratio of 2.35:1 worked perfect with my television and had no problems with color or contrast.  The movie plays extremely well through my Blu-ray player to the HD television with sharp clarity.

FINAL ANALYSIS: An inspiring film offering a lot of challenges. (B)