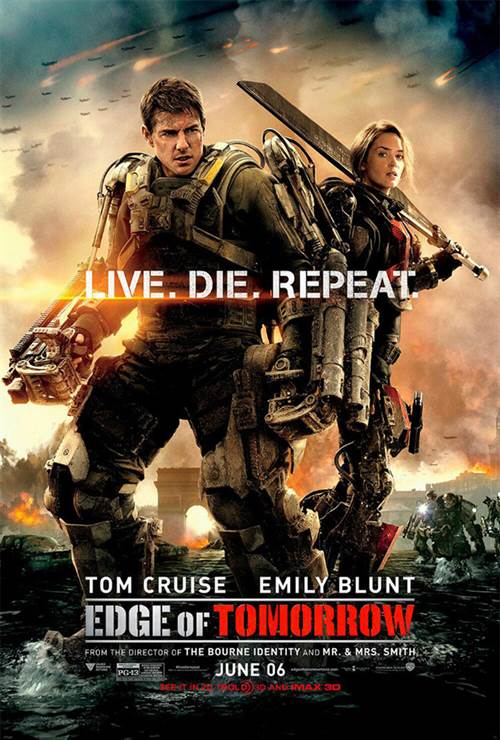 Tom Cruise will plays Lt. Col. Bill Cage who is fighting an alien race, called Mimics, but whenever he is killed, he wakes again to fight the same day over again, not too unlike a Sci-fi Groundhog Day. He doesn't have to relive the day all alone though - Emily Blunt (Looper) is set to star alongside Cruise as Special Forces operative Rita Vrataski, a veteran of war who has slain more Mimics than any other human.

Stream Edge Of Tomorrow in Digital HD/4K from the AppleTV store.

Listen to the Edge Of Tomorrow soundtrack on Apple Music.

Edge Of Tomorrow images are © Warner Bros.. All Rights Reserved.


Doug Liman/Tom Cruise Sci-fi Film Gets Release Date  10/1/2012 2:48 PM EST
Warner Bros. has announced a March 14, 2014 release date for the Tom Cruise Sci-fi movie "All You Need Is Kill". The movie is based on the book of the same name and will be directed by Doug Liman (Jumper).Cruise will play Lt. Col. Bill Cage who is fighting an alien race, called Mimics, but whenever he is killed, he wakes again to fight the same day over again, not too unlike a Sci-fi Groundhog Day...  More>> 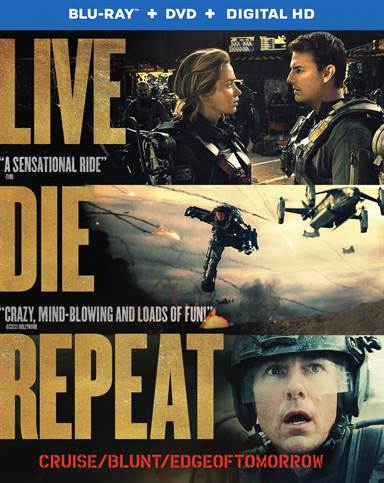 "Shampoo, rinse, repeat" or Groundhog's day on a bad acid  trip are really two of the best ways to sum up Edge of Tomorrow starring Tom Cruise (Mission impossible; Jack Reacher)With the concept of the film, Edge of Tomorrow  could have been boring repeat footage going through the same day over and over again but it luckily isn't.  For those who like war movies, sci-fi thrillers or a good Tom Cruise flick, Edge of Tomorrow is a Blu-ray you may want to add to your collection.

When the movie begins Major Will Cage (Cruise) is a Public relations guy putting a pretty face to the war and the military's latest technology "battle suits".  After Cage angers General Brigham, played by Brendan Gleeson  (Troy, Gangs of New York),  he finds himself on the front lines with no combat training battling aliens called mimics.  When he kills an alpha mimic at the exact moment he dies, Cage finds e is in an endless loop, reliving the same day over and over again, having experienced the same fate previously, Soldier Rita Vrataski (Emily Blunt, The Devil wears Prada, The adjustment Bureau) is an unusual ally explaining to Cage the fate that has befallen him and helping him to navigate his strange, new existence.

Cruise gives a solid performance in this role portraying his usual action hero persona with a little extra something.  When Cage first head off to combat, ill-equipped to fight and defend himself, the audience really senses his terror and confusion.   Blunt also does a great job as the strong career soldier void of most emotion and, at times, robotic.  A very good supporting cast including Bill Paxton Twister, (Apollo 13) as Master Sergeant Farell, help cruise and Blunt tell a believable story with an unbelievable plot.

Directed by Doug Liman (Mr. and Mrs. Smith, The Bourne Identity), Edge of tomorrow is fast paced and purposeful.  Like his other films, Edge of Tomorrow is easily identifiable as a Liman production with special care given to explosions while not sacrificing plot development.  While Liman's other films weren't war stories per say, they all share a similarity to Edge that is uniquely Liman.

The Blu-ray extras are a nice addition to the movie.  A segment devoted to the exo-suit the actors wear, gives the audience an insight into the complexity of the equipment and helps us to see the "weapon" almost as a character of its own.  Another segment focuses on the aliens and shows how much work and thought Liman put into them.   A feature about the director himself is an interesting look as to how he approached the concept of this film and a look behind how he thinks about directing and film making in general.    The only extra I felt was unnecessary was the deleted scenes.  They didn't add anything unique or interesting to the Blu-ray.

Presented in 1080p High definition video and DTS-HD 7.1 audio, pretty much the standard for Blu-rays now a days, Edge has crisp visuals and loud vibrant audio helping to make each explosion come to life.  At 113 minutes running time this movie is action packed from start to finish and will keep the audience engaged the whole time.   B+