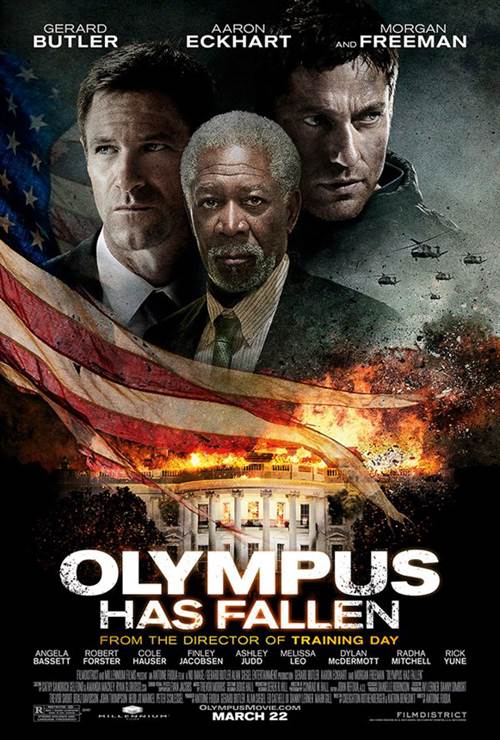 When the White House (Secret Service Code: "Olympus") is captured by a terrorist mastermind and the President is kidnapped, disgraced former Presidential guard Mike Banning finds himself trapped within the building. As our national security team scrambles to respond, they are forced to rely on Banning's inside knowledge to help retake the White House, save the President, and avert an even bigger disaster.

Download Olympus Has Fallen in Digital HD/4K from the iTunes store.

Olympus Has Fallen images are © FilmDistrict. All Rights Reserved.


Sequel to Olympus Has Fallen Will Take Place in London  10/30/2013 12:53 PM EST
"Olympus Has Fallen" which grossed $161 million worldwide, will be getting a sequel.The next installment of the franchise will be titled "London Has Fallen", and will feature a plot to strike at London during the funeral of the British Prime Minister. Gerard Butler will reprise his role, alongside Aaron Eckhart and Morgan Freeman as well as Angela Bassett and Radha Mitchell.Filming will begin in L...  More>> 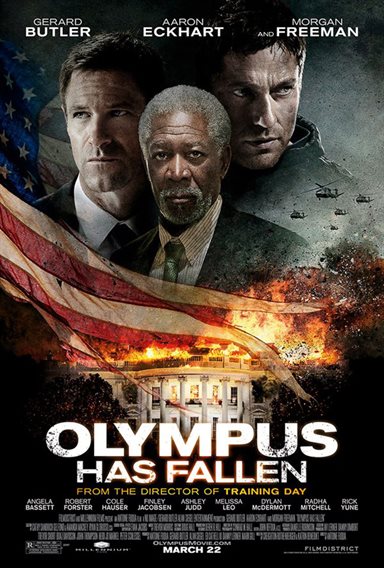 One of the best action films this year, Olympus Has Fallen provides continuous action, intrigue and drama with a subject fresh in the news.  Adding a bit of realism during the release of the film is the recent activity in North Korea making this film a possible wakeup call. This work of fiction by Film District gives a chilling reminder that we can be vulnerable to the threats of the Far East.


Olympus Has Fallen centers on a military attack by a platoon of North Korean renegade soldiers who have infiltrated the United States, smuggled in massive armaments, negotiated inside intelligence, obtained help from a US rogue operative, avoided military radar systems and are now in control of the White House including President Benjamin Asher (Aaron Eckhart).  With the Vice President also held by the group, the sneak attack puts Representative Trumbull (Morgan Freeman), the Speaker of the House of Representatives, in the post of acting President while negotiations between Kang (Rick Yune) the leader of the hostile group and the United States take place.


Meanwhile in the President's underground bunker where the nuclear launch recall computers are kept the situation has mounted to the possible destruction of the United States.  If demands by the North Korean's are not met including pulling our troops out of South Korea, abolishing the treaty that ended the Korean Conflict and exiting our Naval fleet from the area, buttons will be pushed.  This sets up a cat and mouse game that finds former Presidential Security Guard Mike Banning (Gerard Butler) moving through the captured White House "John McClane" style as the only chance for possible Presidential rescue.


Under the direction of Antoine Fuqua (Training Day) the creative film gets really gutsy and thrilling.  His up-in-your-face fighting and explosive story make a good mix with Gerard Butler as his lead protagonist who does his own version of Die Hard's John McClane, and that's a good thing.  In the interior of a nearly destroyed White House Fuqua moves Banning in and out of tight situations knocking-off Korean Terrorists as he maneuvers himself into a position where he can pull off a promising win.


His actors are on the top of their game adding suspense, surprise and realism to the plot.  I especially like the tenacity of Melissa Leo as the Secretary of Defense Ruth McMillan who is one of the captives in the Presidents bunker.  Fuqua turns Kang, played with harsh realism by Rick Yune, on McMillan brutalizing her with punches and kicks that look so real, it sickens. Leo gives a genuine performance as the beaten woman who resists giving up her password that will allow entry into the missile silo computers.


I also like the role played by Aaron Eckhart as President Asher who personifies good leadership, a strong will and a fearless view of America's resistance to terrorism.  His presence on the screen as the leader of the free world shows our never back down attitude and perseverance in the face of oppression. Eckhart takes a vicious beating at one point with a very realistic performance that may make you cringe.


Fuqua doesn't hold back on his attack on the White House with a special machine gun fitted cargo plane full of armaments.  His film's a war with explosions, gun fire, rocket launchings, chopper attacks, ground assaults, fighter jet skirmishes and other means of aggression creating startling damage and devastation.  His sneak attack that takes down America's most protected house had to be realistic and he comes as near as possible to making it look authentic for his set-up to the thriller.


While the film does contain a lot of fictional situations and gets a little overly aggressive, it in a way serves as notice to the potential possibilities of a homeland invasion.  In a recent report by CBS/AP that was released on March 11, 2013 and can be read at  HYPERLINK "http://www.cbsnews.com/8301-202_162-57573516/north-korea-reportedly-nullifies-armistice/" http://www.cbsnews.com/8301-202_162-57573516/north-korea-reportedly-nullifies-armistice/ is the following excerpt:


"North Korea reportedly nullifies armistice"
"SEOUL, South Korea, March 11, 2013- South Korea and the United States began annual military drills Monday despite North Korean threats to respond by voiding the armistice that ended the Korean War and launching a nuclear attack on the U.S."
"North Korea has said the U.S. mainland is within the range of its long-range missiles, and an army general told a Pyongyang rally last week that the military is ready to fire a long-range nuclear-armed missile to turn Washington into a "sea of fire."


Olympus Has Fallen has been rated R by the MPAA for strong violence and language throughout.  There are scenes of realistic brutality and viciousness that may be upsetting to the immature and timid.


FINAL ANALYSIS: A fictional thriller that entertains with an ominous message. (B+)