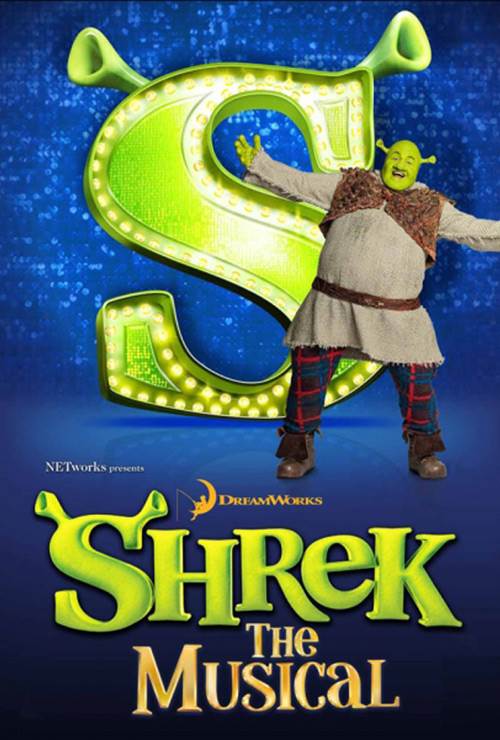 The greatest fairy tale never told comes to life in a whole new way in this breathtaking Broadway musical adaptation of the Academy Award-winning hit movie Shrek! Featuring a fantastic score of 19 all-new songs, along with dazzling dancers and stunning scenery, Shrek the Musical is ogre-sized entertainment for the whole family!

Stream Shrek the Musical in Digital HD/4K from the AppleTV store.

Listen to the Shrek the Musical soundtrack on Apple Music.

Shrek the Musical images are © DreamWorks Studios. All Rights Reserved. 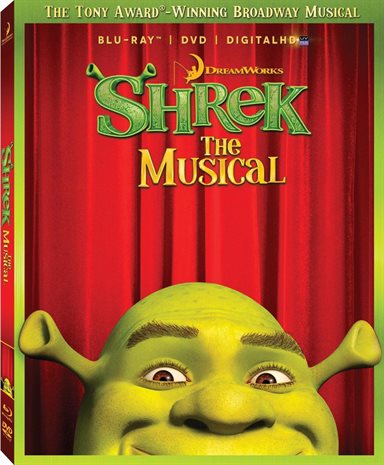 There has been a lot of talk over the past several years about the so-called "Disneyfication" of Times Square and Broadway. Broadway, once the purview of creative types who would bring completely original entries to the stage, has increasingly become a warehouse for adaptations of films. Disney has been one of the prime beneficiaries of this multimedia approach to sucking every available consumer dollar out of any given property. While some adaptations like the Broadway version of The Lion King have been unexpectedly graceful and some might argue even stunning in their revampings, many others have been middling efforts. This tendency certainly isn't confined to Disney. More and more Broadway has seen a glut of musicals simply repeating the title of a hit movie with "The Musical" following a colon, an apt symbol of the lack of creative imagination that often accompanies these efforts. The current Broadway environment is all about marketing, and a recognized property like Beauty and the Beast, Aladdin or even Newsies is felt to have more built in appeal than something many people have no previous association with. DreamWorks obviously saw the balance sheet handwriting on the wall and took a page from Disney's ever more impressive ledger, crafting a huge stage musical out of Shrek. The stage version actually premiered in my neck of the woods at Seattle's Fifth Avenue Theater, where a bunch of Broadway bound shows have premiered for their tryout phase. The earliest iteration of Shrek saw a basically charming show that nonetheless had both technical issues as well as a somewhat underwhelming score. Quite a bit of tinkering, including jettisoned songs, added songs, and some major cast changes, followed before the musical actually opened to tepid but generally favorable reviews in late 2008. The show eked out a run of just a little longer than a year, closing with a significant loss that may have shocked the DreamWorks executives who were counting on this to be a "lion (king)-sized" success.

The ironic thing about Shrek being the one of the latest subjects of Disneyfication is that the original animated film actually skewered this very same trend, poking not so subtle fun at the Mouse House and its ubiquitous reach. That decidedly anarchistic approach has largely been jettisoned here, with a still reasonably humorous book written by an unlikely David Lindsay-Abaire (Rabbit Hole), who also provided the workmanlike lyrics. The music is by Jeanine Tesori, an impeccably skilled arranger and conductor who has contributed some wonderful original stage pieces over the years (Caroline, or Change and especially Violet), but who has seemed more intent on cashing paychecks lately for higher profile adaptive efforts, including yet another musical culled from a film, Thoroughly Modern Millie. (Millie's star Sutton Foster is also on hand in this musical as Princess Fiona.)

Shrek the Musical is sadly a largely prefab experience. It's big and colorful, and often very noisy, but there's little real joy to be found. Some elements have made the transition nicely enough from the animated version— including a kind of funny Gingerbread Man puppet like device—but other elements are surprisingly stupid. Chief among these is the attempt to make the obviously fake legs of Farquaad (Christopher Sieber) provide running gags that are barely at the Dorf level of ingenuity. Brian d'Arcy James wisely chooses not to channel Mike Myers in his portrayal of the titular character, but there's a distinct disconnect between Shrek's still brogue-influenced speaking voice and James' big, legit singing voice, which may remind some of one Jim Nabors making the transition from Gomer Pyle, U.S.M.C. to operatic pop singer.

It's perhaps notable that two source cues used in the original Shrek suffer much different fates in this production (and by extension, this Blu-ray). Leonard Cohen's haunting "Hallelujah" survives only as the underscore for DreamWorks' logo, an obvious reference to one of the studio's most distinctive animated achievements. On the other hand, many may feel that the high point of Shrek the Musical is the rabble rousing finale, which is not in fact a Tesori-Lindsay-Abaire piece, but a noisy version of Neil Diamond's iconic "I'm a Believer", made famous of course by The Monkees and, later, in the animated version of the tale. It's hard to believe in something so coldly calculated to cash in on something that was in its original form a rather magical experience. Maybe some of that famous Disney fairy dust might help, after all.

Shrek the Musical is presented on Blu-ray courtesy of DreamWorks and 20th Century Fox Home Entertainment with an AVC encoded 1080p transfer in 1.78:1. While this presentation does have a glut of different angles and good coverage of both stars and ensemble and certainly rises to well above average quality, overall this is not an excessively sharp looking or well detailed high definition experience. Fine detail is certainly commendable in close-ups, where the seams of Shrek's make-up or the joints in Pinocchio's nose can clearly be seen. Shrek the Musical's lossless DTS-HD Master Audio 5.1 mix is a hit or miss affair. While much, even most, of this outing sports great fidelity and clarity, there are recurrent issues with both overbearing audience noise which completely drowns out even ensemble singing as well as some equally overwhelming hall ambience that makes several numbers (notably the "I'm a Believer" finale) awash in thudding reverb and a really muddy sounding overall resonance.

I'm not a huge musical theater fan but can respect the success of some of the Disney musical stage adaptions, but Shrek the Musical is just kind of a tired enterprise a lot of the time. Kids will probably lap this up, as there's a significant amount of stagecraft involved and the larger than life characters will no doubt appeal to their sensibilities. That said, I doubt any of them, let alone the adults in the room, will be able to come out of this experience with any of Shrek's original songs running through their minds.