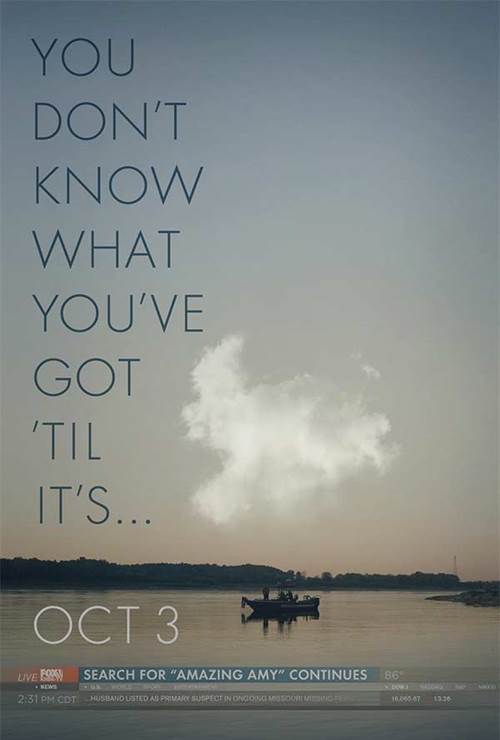 Directed by David Fincher and based upon the global bestseller by Gillian Flynn – unearths the secrets at the heart of a modern marriage. On the occasion of his fifth wedding anniversary, Nick Dunne (Ben Affleck) reports that his beautiful wife, Amy (Rosamund Pike), has gone missing. Under pressure from the police and a growing media frenzy, Nick’s portrait of a blissful union begins to crumble. Soon his lies, deceits and strange behavior have everyone asking the same dark question: Did Nick Dunne kill his wife?

Stream Gone Girl in Digital HD/4K from the AppleTV store.

Listen to the Gone Girl soundtrack on Apple Music. 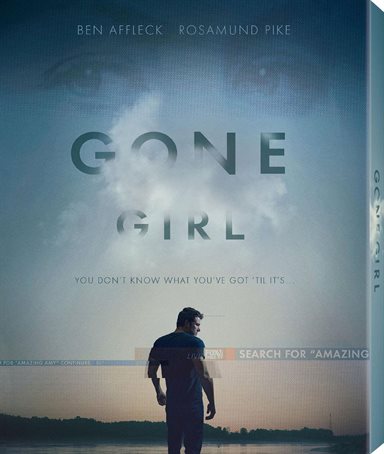 Just when you think you've figured it all out, a new twist is added to the plot of Gone Girl, which once again leaves you paying close attention to see what happens next.  Based on the book of the same name, author and screenwriter, Gillian Flynn takes the audience on a journey of lies, deception, and psychological cunning played out in "anytown, Missouri, America". The story is so well written and acted that after two and a half hours you are hoping there is more.  The movie ending opens itself up for a sequel and if it can be done in the right way, with Flynn at the helm, it would promise to be as equally an excellent movie as it's predecessor.

The cast, including Affleck and Pike, are excellent with especially noteworthy performances from Kim Dickens (The Blind Side) as Detective Rhonda Boney and Carrie Coon (The Leftovers) as Nick's twin sister, Margo.  Supporting roles from Neil Patrick Harris (How I Met Your Mother) as Amy's jilted ex-boyfriend, Desi Collings and Tyler Perry (Why Did I Get Married, Madea Gets a Job) as Nick's high-powered attorney, Tanner Bolt, add another layer to an already complex plot and cast.  Amy's parents, Rand and MayBeth Elliott, played by David Clennon (Extraordinary Measures) and Lisa Barnes (Royal Paines) give us some insight into why Amy grew into the woman she became.

Gone Girl was originally shot in Red Epic Dragon 6K format and then downgraded for the theatrical and Blu-ray release.  However, the amazing video quality still shines through with perfect color saturation and black levels giving it a pristine transfer that is demo quality.

One might think that the audio quality in a non-action film wouldn't be a selling point of a film, but this is far from the truth of Gone Girl. The DTS-HD Master Audio 7.1 track provides a full dynamic range of sound and Nine Inch Nails front man Trent Reznor and Atticus Ross's soundtrack perfectly resonates at just the right times.

Special features are unfortunately lacking on this release. The disc is pretty bare bones, aside from a digital copy of the film, a commentary by director David Fincher, and a physical copy of a fictional children's book used in the film entitled Amazing Amy Tattle Tale.

Gone girl is everything you would expect of a David Fincher (The Social Network, Girl with the Dragon Tattoo) movie and his direction is straightforward and direct while building layer upon layer of visuals and plot points.  Like most of his films, every scene has a purpose and the audience never feels bored.  The long duration, another characteristic of many of Filcher's films could deter moviegoers but it never drags or feels forced.  As the end credits rolled, I couldn't believe the movie was over and wanted to see more.

While audiences may think the film is geared towards a mostly female audience, I can assure you it isn't and has plenty of thought provoking and thrilling moments for either gender, along with one particularly gory and bloody scene that could rival the best horror movies.  While this film and Blu-ray is perfect in every way the lack of special features is truly a downer for such an amazing piece of cinema. This is one movie that is well worth the price of the Blu-ray and demonstrates why they are up for an Academy Award.