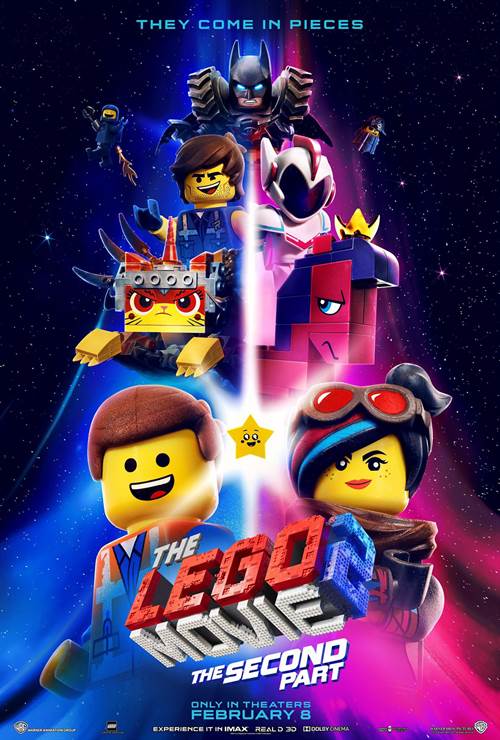 The LEGO Movie 2: The Second Part” reunites the heroes of Bricksburg in an all-new action-packed adventure to save their beloved city. It’s been five years since everything was awesome and the citizens are facing a huge new threat: LEGO DUPLO® invaders from outer space, wrecking everything faster than they can rebuild. The battle to defeat them and restore harmony to the LEGO universe will take Emmet, Lucy, Batman, and their friends to far away, unexplored worlds, including a strange galaxy where everything is a musical. It will test their courage, creativity and Master Building skills, and reveal just how special they really are.

Download The Lego Movie 2: The Second Part in Digital HD/4K from the iTunes store.

Listen to the The Lego Movie 2: The Second Part soundtrack on Apple Music.

The Lego Movie 2: The Second Part images are © Warner Bros.. All Rights Reserved.

The LEGO® Movie 2: The Second Part Advance Screening Event to be...  1/23/2019 9:27 AM EST
Warner Bros. Pictures has invited fans to a one-day-only advance screening of "The LEGO® Movie 2: The Second Part". The event will take place at approximately 500 theatres on Sunday, January 26. Tickets will go on sale for the vent on Wednesday, January 23, at participating theaters and regular online outlets.  Be among the first to catch Emmet, Lucy, Batman and the whole Bricksburg gang in their ...  More>> 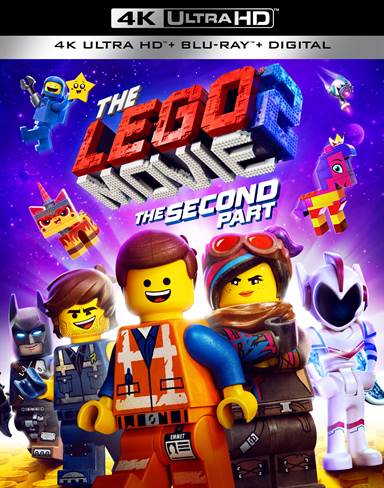 Lego Toys- The building blocks of our childhood. Lego Toys - The nightmare of every barefoot parent as they wander around the house in the dark late at night.  Lego Toys- those interlocking, plastic pieces that clicked and snapped into place and fueled one's imagination.  Remember the hours of enjoyment spent building people and things?  So many children have happy childhood memories of creating and playing with legos that it was only a matter of time when someone got the idea to bring them to life in an animated feature film and in 2014 The Lego Movie became a surprise hit with kids and adults alike.  Its success led the way to The Lego Batman Movie, The Lego Ninjago Movie, and 2018's The Lego Movie 2: The Second Part.

In the second installment go The Lego Movie everything seems to be ok in Bricksburg until the duple invade their city (A.K.A Finn's sister Bianca is playing with his legos).  When Emmitt (Chris Pratt; Guardians of the Galaxy) builds them a heart in peace one of the invaders eats it starting a war.  Five years later, with Bricksburg - now called Apocalypseberg - in ruins, The citizens have become hardened, well all except Emmitt,  of course.

Suddenly a mini-doll comes to proclaim that her Queen, Watevra Wa'Nabi (Tiffany Haddish; Girls Trip) wants to marry the leader Apocalypseburg. However, she then kidnaps Batman (Will Arnett; Arrested Development), Lucy (Elizabeth Banks; Pitch Perfect) and other citizens of Apocalypseburg and Emmit decides to go on a rescue mission to save them.  Batman agrees to marry the Queen in order to prevent "Armageddon" but Emmitt meets Rex (also voiced by Pratt) who tells him this is all a part of the queen's evil plan.  Emmitt with Rex's help sets out to stop the wedding which ultimately brings on the feared "Armageddon" seemingly dooming everyone to live inside storage totes.  By banning together though they manage to reverse "Armageddon" and save Apocalypseburg.

Like the original Lego movie, The Second Part has some terrific voice talent with many of the original actors returning for the sequel.  Haddish is a strong addition and brings her unique brand of humor to the role.  Pratt is great as the ever-optimistic Emmitt and the equally pessimistic Rex.   Banks reprises her role as the strong and confident Lucy and Arnett makes for a great Batman.

The 4k version of the film is presented in 2160p High Definition video and the quality is apparent.  The picture is extremely sharp and clean and the colors pop off the screen.  The Dolby Atmos audio is equally impressive as the sound is clear, deep and true. The combo pack comes with a number of extras including Audio Commentary by Director Mike Mitchell, Writers/Producers Phil Lord and Christopher Miller and Animation Director Trisha Gum, Everything Is Awesome Sing-Along, They Come In Pieces: Assembling THE LEGO MOVIE 2, Emmet's Holiday Party: A LEGO Movie Short, Outtakes & Deleted Scenes, "Super Cool": Official Lyric Version and Promotional Material –  In 2019 Be Whatever You Wanna Be, Me and My Minifig, Please Silence Your Cell Phones, LEGO Sets In Action and LEGO Designers (HD, 3:30).

It's always difficult to recapture in a sequel the magic of the first film and sadly, The Second Part suffers this fate.  The surprise from the original has already been revealed so it doesn't pack the same punch the second time around and the story isn't as strong either.  Overall the movie is solid and enjoyable but the exceptions from The Lego Movie and The Lego Batman Movie were so high that it would have been extremely difficult to live up to those expectations.