Home / Movie Database / Get On Up 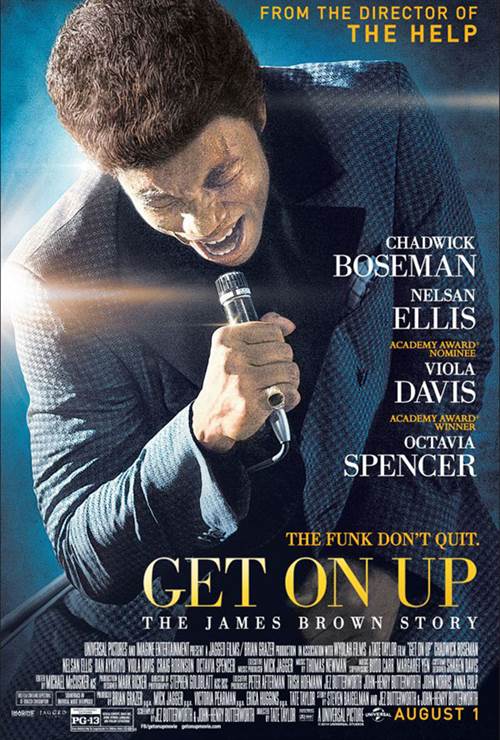 In his follow-up to the four-time Academy Award®-nominated blockbuster The Help, Tate Taylor directs 42's Chadwick Boseman as James Brown in Get on Up. Based on the incredible life story of the Godfather of Soul, the film will give a fearless look inside the music, moves and moods of Brown, taking audiences on the journey from his impoverished childhood to his evolution into one of the most influential figures of the 20th century. Boseman is joined in the drama by Nelsan Ellis, Dan Aykroyd, Viola Davis, Craig Robinson, Octavia Spencer, Lennie James, Tika Sumpter and Jill Scott.

Purchase DVD/Blu-ray/4K UHD physical copy of Get On Up today at Amazon.com

Download Get On Up in Digital HD/4K from the iTunes store.

Get On Up Blu-ray Review 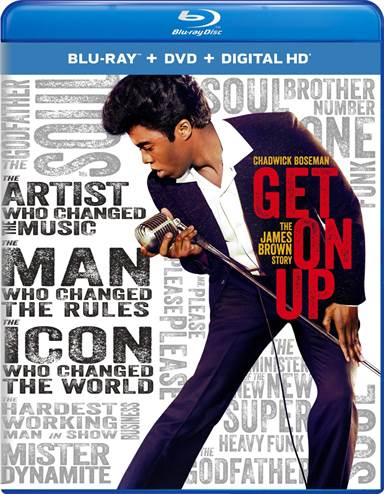 I think the saddest thing for any critic watching a movie, is the moment he or she sees the potential of what could have been, as compared to what is playing out in front of them. This is what came to mind when I got to sit down and watch "Get On Up".  The thing that killed me most was that I couldn't even put my finger on what exactly went wrong.

"Get On Up" is the life story of "The Hardest Working Man in Show Business" the "Godfather of Soul" James Brown. Just the singers career would be an amazing story to tell, let alone the tough childhood he endured or the social part he played during a time of social inequality. It seems as if having too much to cover was part of the problem. "Get On Up" never truly focuses in on any one part of his life or career. In fact its as if the whole film was put together like a recording artist would put together an album, track by track, a piece of drama here, a song there with nothing piecing it together.

Most Biopic films would either start at the beginning like their childhood or when their career started, or even a moment in time that was monumental to the artist and move time back and forth to that moment. "Get On Up" starts with snippets from all over James Brown's career, his childhood, his Vietnam trip, Show appearances, it's a jumbled up mess that makes no sense. It's not until after the first half hour that it calms down and starts progressing somewhat with chronological time. I'm not sure if it was director Tate Taylor (Who directed "The Help") intention to break up all dramatic scenes, but each event in Brown's life was pieced together, little by little over the lengthy 139 minute film.

Heading up a great cast is Chadwick Boseman, who played Jackie Robinson in "42" now taking on the role of "Mr. Dynamite" James Brown in convincing fashion. While he didn't have to sing for the part he did have to move those feet, and that in itself is an accomplishment. Dan Aykroyd ("The Blues Brothers" & "Ghostbusters") plays Ben Bart who ends up being Brown's manager for most if his career, Viola Davis ( "How To Get Away With Murder" & "The Help") plays the role of Brown's mother Suzie Brown and Lennie James ("The Walking Dead") plays his father. Octavia Spencer and Craig Robinson also make short appearances but the only constant throughout the film is long time friend Bobby Byrd played by Nelsan Ellis (Best know as Lafayette Reynolds from "True Blood").

The one thing they did get right, which you probably couldn't go wrong with, was the soundtrack. Classics like "Get Up Offa That Thing", "I Got You (I Feel Good)", "Try Me", "It's a Man's Man's Man's World", and "Get Up (I Feel Like Being a Sex Machine)" are all included sung by the man himself, James Brown. The music itself is pretty much all that keeps you going from song to song as you tap your feet and move your head to the beat.

"Get On Up" now released on DVD and Blu-ray by Universal has a chunk of bonus features that actually entertain more than the film itself. Honestly there is a piece called Tate Taylor's Master Class which has Allison Janney & John Benjamin Hickey dancing in a never ending take to Brown's music. It's hysterical just how far Janney takes it and boy she can shake that thing….like a sex machine!

Other Bonus features like "The Founding Father of Funk", "On Stage With The Hardest Working Man" and "Long Journey To The Screen" are gems with insight on how important it was to Producer Mick Jagger and Producer Brian Grazer to get this film made.  Also there were bits from current stars (Ice Cube, Pharrell, and Cee lo Green) and their opinions on James Brown's importance in the history of music.

Also in the package is extended scenes which really should have stayed on the cutting room floor and Topping it all off is individual performances of each song.

"Get On Up" really had enormous potential. It could have been this decade's "Ray" and projected Boseman into another arena. Instead it plays off very disjointed and never allows the viewer to become emotionally connected with Brown's hardships or accomplishments. I so wished I could have shouted "I feel Good" at watching "Get On Up", but in the end all I could do was plead "Please Please Please"

I give "Get On Up" 2 splits out of 5
One for the music scenes, and one for the Bonus extras.

Allison Janney on the other hand gets 5 for 5…Keep shaking it!
Best Bonus Scene EVER!

Read More Get On Up Reviews