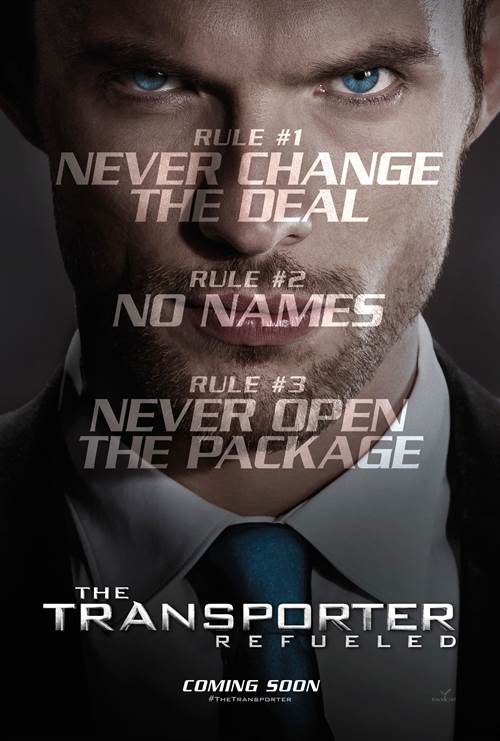 The stakes are greater and technology better, but the same three simple rules apply: never change the deal, no names and never open the package.

When Frank is hired by cunning femme fatale Anna and her three stunning sidekicks, he quickly discovers he’s been played. Anna and her cohorts have kidnapped his father (Ray Stevenson) in order to coerce Frank into helping them take down a ruthless group of Russian human traffickers. Fueled by revenge, he will break all his rules and stop at nothing to rescue his father in this action-packed thrill ride across the French Riviera.

Download The Transporter: Refueled in Digital HD/4K from the iTunes store.

The Transporter: Refueled images are © Relativity Media. All Rights Reserved.


New Transporter Trilogy to Be Released  5/20/2013 9:43 AM EST
The "Transporter" franchise, starring Jason Statham, will be releasing some new films.  EuropaCorp and Fundamental Films are set to co-produce three more installments of the action franchise.There is still no word yet if Statham will be back to reprise his role of Frank Martin, and no director is on board yet.  Producing the film will be Luc Besson and Mark Gao....  More>>

Jason Statham and Robert Knepper To Star In Transporter 3  2/27/2008 1:23 PM EST
A third Transporter film has gotten the green light, and Jason Statham will be reprising his role once again as Frank, a mercenary driver/delivery man aka "Transporter".Also returning to the series is Francois Berleand, and a Robert Knepper of "Prison Break" fame, will be new to the lineup. The film will be shooting for 16 weeks on location in Russia and France.  A new director will be at the helm...  More>> 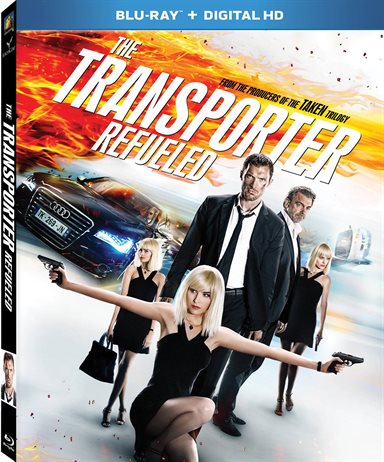 The Transporter, starring Jason Statham (The Expendables), was a trilogy in the early 2000's that all but put Statham on the acting map, proving he could carry a film as a leading man.  As Frank Martin, he was the perfect combination of calm, cool and collected, with an element of "thug" underneath.  The first film in the series was entertaining and action packed which left audiences wanting more – hence the sequels.

Almost 15 years later, Twentieth Century Fox home entertainment rebooted the franchise with Transporter Refueled.  Hoping to cash in on the popularity of the first film, The Blu-ray has made its way to stores in anticipation of all the Frank Martin fans.

Martin, now played by Ed Skrein (Game of Thrones), gets sucked into an international sex ring heist when he agrees to pick up a package and transport it.  His "package" – 3 beautiful women all in blonde wigs- inform him he must do as they say since they have kidnapped his father (Ray Stevenson; Divergent).  After having no choice but to help them, Martin becomes emotionally invested in their heist and he stays to see the deal through to the end.

Sadly, sitting through this movie to the end was a painful experience.    The story is boring, the acting is mediocre for the most part, and the fight scenes are ridiculously unrealistic.  Skrein was brought on in an attempt to embody the likeness of Statham but he, unfortunately, just isn't cool enough to pull it off.  Add to that, the unoriginal, recycled plot line – how does his father get kidnapped twice in the same film?- and you end up with a thinly veiled attempt to redo a film that really didn't need redoing.

While the French backdrop is gorgeous, Director Camille Delamarre (Brick Mansions) doesn't really take much advantage of it.  Much of the film is inside buildings, which is a shame.  The 1080p AVC video is excellent throughout with vivid contracting colors and sharp picture quality.  The DTS-HD Master 5.1 Audio is clear with a depth of sound that runs the entire spectrum.

The Blu-ray also includes 3 extras, but none of them are particularly interesting.  The first one, Frank Martin: The Reluctant Hero takes a look at the main character, the actor who plays him and the fight training he endures to prepare for the role.  The second feature entitled The Coer Brise: Les Femmes of Refueled is about the strong yet lovely ladies at the center of the film.  And finally, Rocketing from 0-60, goes in depth behind the car and all the "tricks" it can do.

Some movies shouldn't have a "reboot" and this film is one of them.  The current movie didn't recapture the essence of the original and Skrein just can't compete with Statham.  Honestly, I wouldn't bother to spend hard earned money on this one…go out and buy the original instead.