Home / Movie Database / Before I Go To Sleep 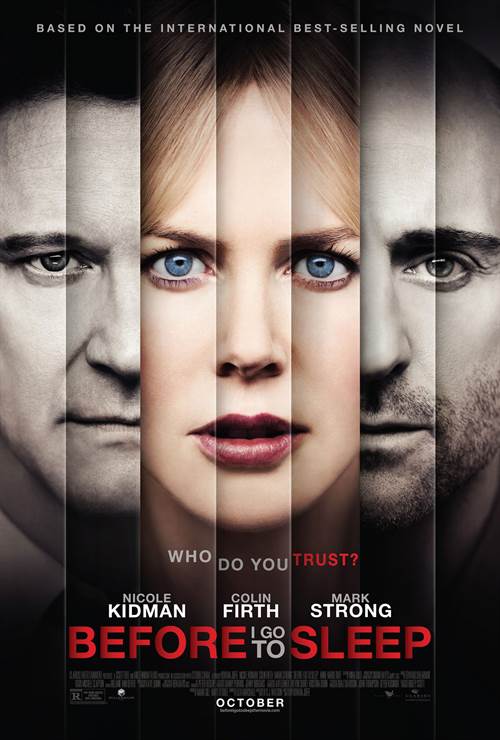 Before I Go To Sleep Synopsis

A taut thriller based on the worldwide best-selling novel by S.J. Watson, BEFORE I GO TO SLEEP is the story of a woman (Nicole Kidman) who wakes up every day with no memory as the result of a traumatic accident in her past. One day, terrifying new truths begin to emerge that make her question everything she thinks she knows about her life - as well as everyone in it, including her doctor (Mark Strong) and even her husband (Colin Firth).

Purchase DVD/Blu-ray/4K UHD physical copy of Before I Go To Sleep today at Amazon.com

Stream Before I Go To Sleep in Digital HD/4K from the AppleTV store.

Before I Go To Sleep Blu-ray Review 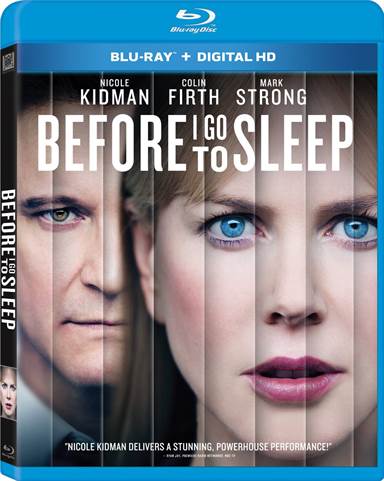 How would you feel if you woke up every morning not remembering a thing from the previous ten years?  Such is the plight of Christine Lucas (Nicole Kidman; Eyes Wide Shut, Batman Forever).   Every evening she goes to sleep knowing bits and pieces of her life told her by her husband Ben (Colin Firth; The King's Speech, Kingsman: Secret Service) only to awake remembering none of it, including him.

Based on the British novel of the same name, Before I Go To Sleep, chronicles Christine's struggle to try and remember her old life.  Aided by Dr. Nasch (Mark Strong; Sherlock Holmes, Body of Lies), She begins to keep a video diary which she watches each morning after Ben goes to work.  Through this new psychologically therapeutic technique, Christine begins to remember a little bit including the fact that she had a son.

While Before I Go To Sleep has an all-star cast there are moments when the movie lags.  However, at only 92 minutes long new time director Rowan Joffe couldn't have cut anymore within making the movie in to a short.

Kidman does a superb job as Christine - a frightened, confused amnesiac.  She takes us along on her journey of self-discovery to remember every day life and the circumstances behind the attack that left her in her current state.  Firth and Strong are both excellent as her husband Ben who hides more than one secret and as the doctor eager to help her recover her thoughts, respectively.

As mentioned, the movie moves at a slow pace, which is a shame as the plot is interesting.  Had there been a different director perhaps unique sequences would have held the audience but Rowan also doesn't add any interesting or unusual shots to spice up the film.

The Blu-ray is simply another disappointment in what began as a good, solid story.  While shot in 1080p video, the film is grainy nd seems to have a hue with a tinge of yellow, which is distracting.   The DTS-HD Master Audio 5.1 is fine for what the film needs but doesn't actually add much.

The worst part is the Blu-ray extras.  There are only a few, short ones and they add nothing to the disc.  There are three Character Illusions from the point of view of the main characters that are simply short snippets of the story.   There is also a short segment called "Forget me not" that is the three actors talking about the plot of the film.  All and all there is about 6 or 7 minutes of extras that all boil down to one movie trailer after another.

While the story is interesting and the acting top rate, I don't know that there is any reason to go out and buy the Blu-ray.  My final thought…save your money and wait to see it until it shows up on one of the television movie channels.  C+

Read More Before I Go To Sleep Reviews