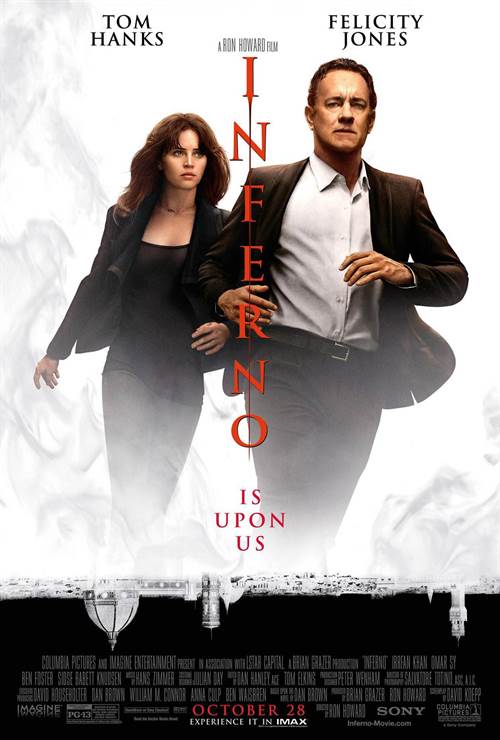 Inferno continues the Harvard symbologist's adventures on screen: when Robert Langdon wakes up in an Italian hospital with amnesia, he teams up with Sienna Brooks, a doctor he hopes will help him recover his memories and prevent a madman from releasing a global plague connected to Dante's "Inferno."

Stream Inferno in Digital HD/4K from the AppleTV store.


Principal Photography Begins On "Inferno" Third Robert Langdon M...  5/11/2015 11:07 PM EST
CULVER CITY, Calif., May 11, 2015 - Principal photography has commenced on Inferno, the new film in Columbia Pictures' Robert Langdon series, which has taken in more than $1.2 billion worldwide to date. The film is slated for release on October 14, 2016. In the film, Academy Award® winner Tom Hanks reprises his role as Robert Langdon.  He is joined by an international cast of actors, including Fel...  More>> 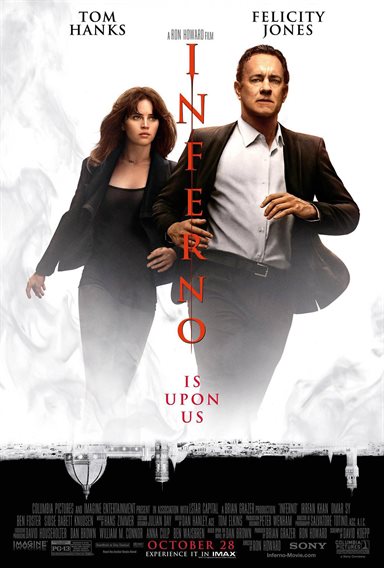 If you like solving puzzles, you should read every one of Dan Brown's novels.  He combines cyphers with history and architectural beauty.  He has made Professor Robert Langdon (Tom Hanks; Sully) everyone's favorite teacher and sent us racing all over the world unravelling conspiracies.  His 2013 novel,  Inferno, hits theaters this week and, once again, he keeps audiences on the edge of their seats.

Robert Langdon wakes up in a hospital bed in Florence, Italy not knowing how he got there.  He has a wound where supposedly a gunshot grazed his head and gave him amnesia.  When he finds himself being shot at once again, his Doctor, Sienna Brooks (Felicity Jones, The Theory of Everything), helps him escape and unravel the mystery of why he is in Florence and what he had done for the past 48 hours.

The mystery begins with a Faraday pointer found in Langdon's jacket pocket that depicts and altered image of Dante's Inferno.  Following the clues leads them to a museum and Dante's death mask that is suddenly missing.  A review of the video cameras shows Langdon stealing it the night before with his friend who hides the mask.  Upon finding the mask, Langdon and Brooks find more clues that take them to Venice, and eventually Istanbul, in order to stop a madman from releasing a virus and infecting much of the work in an attempt to cull overpopulation.

For those who didn't read the book, the twists and turns are compelling and keep the story interesting.  For those who did, they will be pleased that much of the movie sticks to the original novel but may be disappointed by the deviation of the ending.  The film ends predictably, as Langdon and the World Health Organization save the day, while the novel has a different outcome.

Hanks is, as always, the consummate actor and his reprisal of the role of Langdon is no less terrific than in the previous films.  He is interesting and solid and I like him in almost every role he takes on.  Jones is equally compelling on screen and does a great job next to Hanks.  It makes one anticipate her upcoming performance in Rogue One: A Star Wars Story all the more.

Director Ron Howard (Apollo 13) once again shows why us why he is an Academy Award Winning filmmaker.  The visuals were stunning and the filmed flowed seamlessly.  The audio is some of the best I have encountered in a film recently and only served to enhance the overall experience.  He manages to tell the story well, while keeping it mostly intact from the original.

The ending is one of the parts that has been altered and becomes rather predictable.  While cinematically more exciting than the original ending, it also holds no mystery.  Audiences who don't know the story might find it wrapped up the movie neatly, but those who do won't necessarily enjoy it.

So often the film adaptation of a beloved novel leaves a lot to be desired, but Howard did a nice job of making sure the movie followed the book for the most part.  Between his direction and the casting, the movie is an enjoyable and entertaining evening.  I've seen far worse this year already.