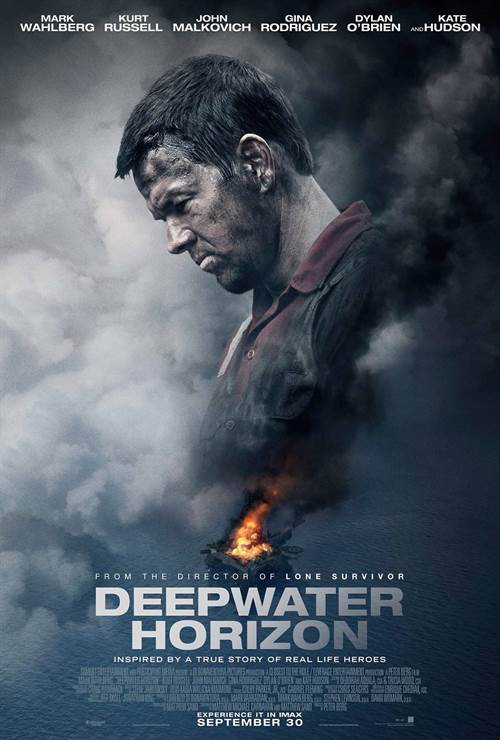 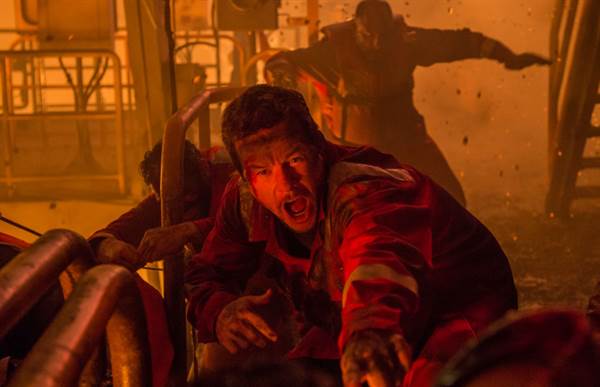 On April 20th, 2010, one of the world’s largest man-made disasters occurred on the Deepwater Horizon in the Gulf of Mexico. Directed by Peter Berg (Lone Survivor), this story honors the brave men and women whose heroism would save many on board, and change everyone’s lives forever.

Stream Deepwater Horizon in Digital HD/4K from the AppleTV store.

Listen to the Deepwater Horizon soundtrack on Apple Music. 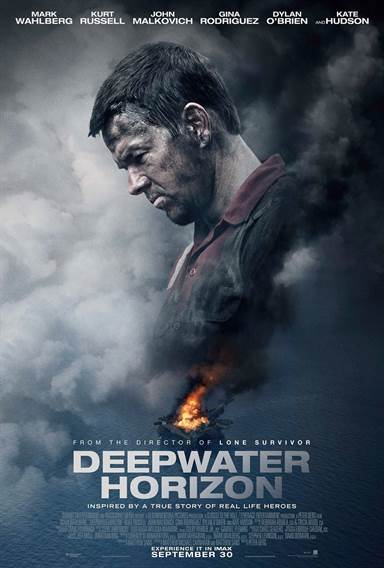 The 2010 BP spill was the worst oil disaster in history.  The Deepwater Horizon rig blew up, sending 210 million gallons of crude oil into the Gulf of Mexico for 87 days, killing 11 men and innumerable numbers of animals.  We all know what happened. We watched it on television.  However, I'm not sure most of us fully understood the scope of the long lasting impact this event had on the environment and the oil industry.  Deepwater Horizon gives us an inside look of what happened on that rig.

Jimmy Harrell (Kurt Russell; The Hateful Eight) and Mike Williams (Mark Wahlberg; Ted) have worked on the Deepwater Horizon for years.  They know oilrigs and the potential hazards, and they know how to keep everyone and everything safe.  When their latest project is 43 days behind schedule, BP executives decide it's time to get moving before completing the necessary safety checks and, as we all know, that was not a smart move.

The negative pressure test on the drill failed but the one on the kill line proved to be safe so BP executive Vidrine (John Malkovich; Burn After Reading) gave the order to move ahead with plans.  Shortly thereafter, the drill began spewing mud uncontrollably and signaled a problem of incredible proportions.  When the crew couldn't shut the drill down, it was only a matter of time before the pressure underground proved to be too much and the whole thing ended up exploding, killing those closest to the drill.

The film gives the audience a first hand account of what it is like to be on a rig 45 miles out in the ocean.  Director Peter Berg (Battleship) uses camera techniques that make the viewer feel as if they are a member of the crew going through the disaster right along with everyone else.  While it is an effective tool, I find it to be kind of annoying at times and felt it distracted me from the actual story.

Russell, Wahlberg and Malkovich are all incredible actors who portray these real life individuals with honesty and sincerity.  Malkovich employs his usual charm to deceive you into believing he is a good guy even though you know otherwise.  Russell is solid as the man in charge of a well-run ship and Wahlberg is a wonder that can go from comedy to real life drama in the blink of an eye and pulls both genres off beautifully.  Kate Hudson (Rock the Kasbah) is also a welcome member of the cast as Williams' wife, Felicia, and Gina Rodriguez (Jane the Virgin) holds her own amongst these acting veterans.

The story started out a little bogged down and cheesy, especially with the Coke can foreshadowing (when you see the film you will know what I mean) but it picks up the pace and sucks the audience in to the plot.  The technical jargon also caused me to lose focus a few times but was a necessary evil to depict how much of an exact science oil drilling really is.

Good films are often memorable because they evoke reactions and feeling that stay with you once the movie is over.  Deepwater Horizon made me angry, sad and infuriated with the oil executives who caused such a disaster and basically got away with it scot-free while eleven men lost their lives and others were injured.

Originally, I wasn't sure I wanted to see this film, but it was interesting, enjoyable and informative, which is usually a really good combination.   While the "shaky cam" technique is annoying and can make some scenes confusing and hard to watch, the overall presentation is effective.