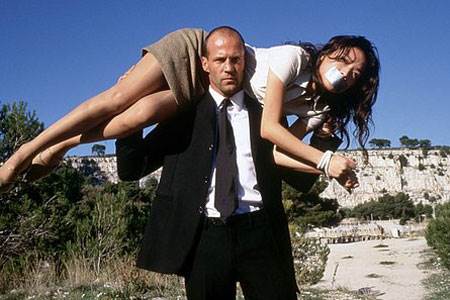 Ex-Special Forces operator Frank Martin lives what seems to be a quiet life along the French Mediterranean, hiring himself out as a mercenary "transporter" who moves goods -- human or otherwise -- from one place to another. No questions asked.

Carrying out mysterious and sometimes dangerous tasks in his tricked-out BMW, Frank adheres to a strict set of rules, which he never breaks. Rule One: Never change the deal. Rule Two: No names -- Frank doesn't want to know whom he's working for, or what he's transporting. Rule Three: Never look in the package.

Frank's newest transport seems no different from the countless ones he's done in the past. He has been hired by an American known only as "Wall Street" (see Rule Two) to make a delivery, but when Frank stops along route, he notices his "package" is moving. Violating Rule Three, Frank looks inside the bag, finding its contents to be a beautiful, gagged woman.

Frank's steadfast adherence to his other two rules -- which make up his basic code of survival -- also quickly falls, hurtling him and his new companion on a road leading to shocking secrets, deadly complications, and the last thing Frank ever expected to come to believe: that rules are made to be broken.

Download The Transporter in Digital HD/4K from the iTunes store.

Listen to the The Transporter soundtrack on Apple Music.

The Transporter images are © 20th Century Fox. All Rights Reserved.


New Transporter Trilogy to Be Released  5/20/2013 9:43 AM EDT
The "Transporter" franchise, starring Jason Statham, will be releasing some new films.  EuropaCorp and Fundamental Films are set to co-produce three more installments of the action franchise.There is still no word yet if Statham will be back to reprise his role of Frank Martin, and no director is on board yet.  Producing the film will be Luc Besson and Mark Gao....  More>>

Jason Statham and Robert Knepper To Star In Transporter 3  2/27/2008 1:23 PM EDT
A third Transporter film has gotten the green light, and Jason Statham will be reprising his role once again as Frank, a mercenary driver/delivery man aka "Transporter".Also returning to the series is Francois Berleand, and a Robert Knepper of "Prison Break" fame, will be new to the lineup. The film will be shooting for 16 weeks on location in Russia and France.  A new director will be at the helm...  More>>