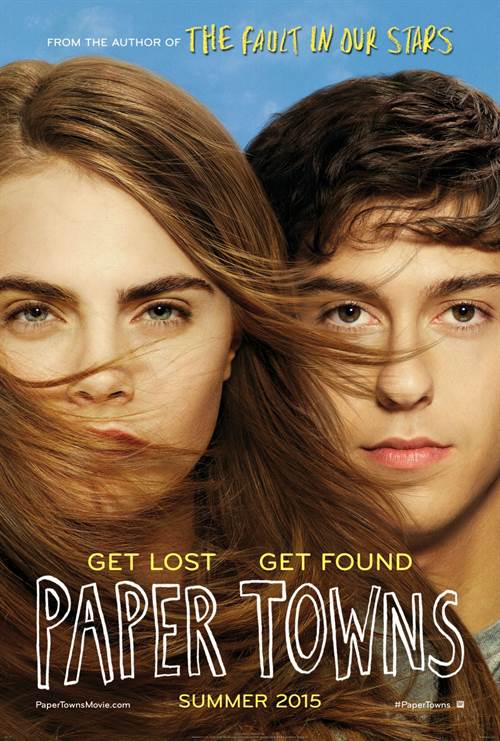 Adapted from the bestselling novel by author John Green ("The Fault in Our Stars"), PAPER TOWNS is a coming-of-age story centering on Quentin and his enigmatic neighbor Margo, who loved mysteries so much she became one. After taking him on an all-night adventure through their hometown, Margo suddenly disappears--leaving behind cryptic clues for Quentin to decipher. The search leads Quentin and his quick-witted friends on an exhilarating adventure that is equal parts hilarious and moving. Ultimately, to track down Margo, Quentin must find a deeper understanding of true friendship--and true love.

Stream Paper Towns in Digital HD/4K from the AppleTV store.


20th Century Fox Announces "Night on The Towns" Event  6/25/2015 11:49 AM EST
LOS ANGELES, June 24, 2015 - Twentieth Century Fox today announced a very special event for its upcoming PAPER TOWNS:  "Night on the Towns," where fans will be the first to see the film and be included in a live simulcast experience of an exclusive Q&A with PAPER TOWNS stars Nat Wolff, Cara Delevingne, Halston Sage, Justice Smith and Jaz Sinclair; author John Green, upon whose bestseller the film ...  More>> 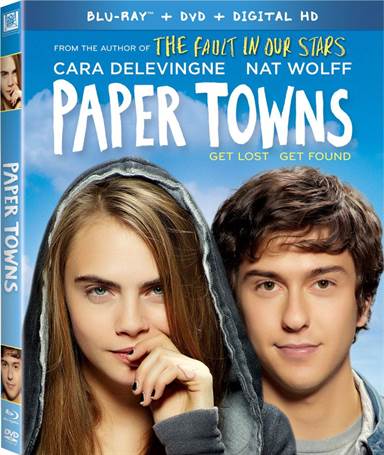 Author John Greene is on fire.  After the huge success of his young adult novel turned movie, "The Fault In Our Stars", he brought another adaptation to the screen in July with his older book "Paper Towns".  Out now on Blu-ray and DVD, this coming of age tale offers viewers a heartwarming story with a bit of teenage angst thrown in.

Margo (Cara DeLevingne; Anna Karenina) has been the love of Quentin's (Nat Wolfe; The Fault In Our Stars) life since she moved in across the street 10 years earlier.  Now both high school seniors, Margo barely acknowledges "Q" exists, until one night she enlists his help in getting revenge on her cheating boyfriend and the rest of her "inner circle".  Initially less than eager to help, Q finds himself on an adventure that makes him ponder his life and the path he is taking.

Deciding he will tell Margo how he feels, Q is suddenly on a crusade to locate her since she has all but disappeared, leaving behind only frustrated parents and friends along with a series of cryptic clues as to her whereabouts.  After deciphering the clues, Q, along with his best friends, "Radar" (Justice Smith; The Thundermans) and Ben (Austin Abrams; The Inbetweeners), plus Radar's girlfriend, Angela (Jaz Sinclair; Rizzoli and Isles), and Margo's best friend, Lacey (Halston Sage; Crisis), embark on a road trip to upstate New York so Q can tell Margo how he feels about her and return to Florida in time for prom.   When things don't turn out how Q planned, he must reevaluate his priorities, and his first love.

Unlike some other coming of age films, this one is fairly well done with intricacies and nuances not always developed in these types of films.  It explores more of the male teenage version of growing up, which so many of its predecessors glossed over it in favor of the more common female teenage drama.   Also, unlike The Fault In Our Stars, it isn't nearly as sappy and heartbreaking.

While young, the cast is full of talented individuals showcasing complexities and understanding of their characters that even some older actors can't adequately portray.  Wolfe is a fantastic choice for Q displaying his nerdy side while emoting a maturity well beyond Q's 17 years of age.  DeLevingne is a little quirky and tomboyish, but clearly captures Margo's adventurous and free-spirited nature with just the right balance of mischievousness thrown in.  The supporting cast is all good, but the females, Sinclair and Sage, tended to stand out more to me than Smith and Abrams.

The 1080p DTS High Definition video is sharp, highlighting the outdoor scenes and color schemes the most while dulling a little during the darker sequences.  The lossless DTS-HD Master Audio 5.1 accentuates the vivid soundtrack used to enhance the mood of teenage rebellion and exploration.

The Blu-ray extras tend to be a lot of similar vignettes peeking behind the scenes at the young cast and Greene.  It's clear they seem to get along well, but I'm not sure we needed that many featurettes to show us the same thing.  The gag reel was boring, but the deleted scenes were somewhat interesting, which I typically find isn't the case.

I'm sure young adults who love John Greene, read the book, and saw the film in theaters, will be interested in owning this one and I don' think they will be disappointed.  For everyone else, it's worth watching once.