THE END OF THE TOUR tells the story of the five-day interview between Rolling Stone reporter and novelist David Lipsky (Jesse Eisenberg) and acclaimed novelist David Foster Wallace (Jason Segel), which took place right after the 1996 publication of Wallace’s groundbreaking epic novel, “Infinite Jest.” As the days go on, a tenuous yet intense relationship seems to develop between journalist and subject. The two men bob and weave around each other, sharing laughs and also possibly revealing hidden frailties – but it’s never clear how truthful they are being with each other. Ironically, the interview was never published, and five days of audiotapes were packed away in Lipsky’s closet. The two men did not meet again. The film is based on Lipsky’s critically acclaimed memoir “Although Of Course You End Up Becoming Yourself: A Road Trip with David Foster Wallace” about this unforgettable encounter, written following Wallace’s 2008 suicide. Both Segel and Eisenbeg reveal great depths of emotion in their performances and the film is directed with humor and tenderness by Sundance vet James Ponsoldt from Pulitizer Prize winner Donald Margulies’ insightful and heartbreaking screenplay.

Download The End of The Tour in Digital HD/4K from the iTunes store.

The End of The Tour images are © A24. All Rights Reserved.

The End of The Tour Theatrical Review 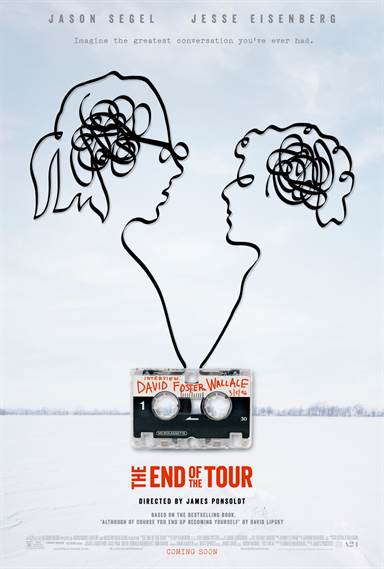 I'm not quite sure how to describe The End of The Tour.  So many adjectives come to mind, it's hard to know which ones to choose. The ones that jump out are intense, philosophical, poignant, introspective, intelligent, and slightly depressing.

Based on a novel by David Lipsky, it tells the story of Lipsky's five day interview with acclaimed author David Foster Wallace, as he finishes his book tour for Infinite Jest, in 1996.  Lipsky, then a writer for Rolling Stone Magazine, follows Wallace to Minneapolis to question him about his life, his work and his future.

During their brief time together, the men form a bond fueled by intelligence, mutual respect, and perhaps, a little bit of jealousy.  Lipsky delves into Wallace's psyche while the two share meals, cigarettes and life stories.  Ultimately, the article for Rolling Stone was never published, but after Wallace's suicide in 2008, Lipsky depicts their conversations and travels in Although Of Course You End Up Becoming Yourself: A Road Trip with David Foster Wallace.

One of the draws of this film is the cast.  Jason Segel (How I Met Your Mother) is brilliant as Wallace, a highly intelligent individual who, like many tortured writers, battled addiction and depression.  He plays Wallace with such depth and intensity that you can see the wheels turning in Wallace's brain and the sadness behind his eyes while he outwardly puts on a mask of confidence and contentment.

Equally as impressive is Jesse Eisenberg (The Social Network) as Lipksy.  He portrays the interviewer with a little cockiness that Lipsky doesn't completely possess, while maintaining a slight sense of awe and reverence for Wallace.

Director James Ponsoldt (Shameless) adds a layer of haze to the meeting by shooting many of the scenes as if they were slightly out of focus.  This element gives the audience a sense of the muddled and murky thoughts that lay in Wallace's brain.  Additionally, a bonus for me was a 90's filled soundtrack which helps set up the film beautifully.

I'm not sure how well this movie will do despite excellent writing and acting, but it certainly made me curious enough to want to research both Wallace and Lipsky and read their books that inspired the film.  Grade B+ 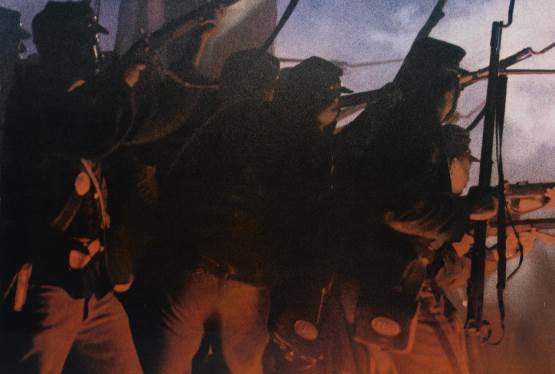