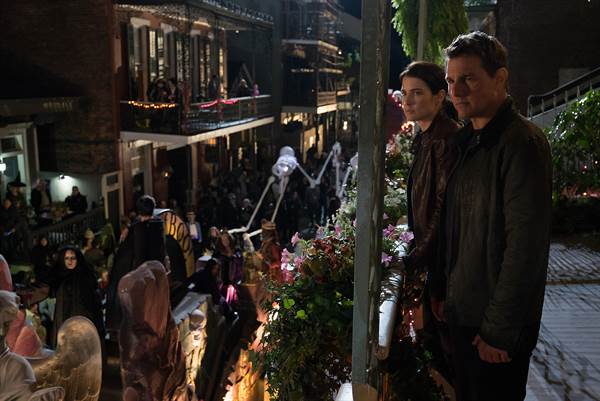 Jack Reacher: Never Go Back follows the title character as he returns to Virginia to meet the head of his former unit. But she's missing, he's being charged with a crime committed nearly 20 years ago, and he may even have a daughter. Making things right will lead him on a cross-country chase to uncover the truth - and maybe even a family.

Download Jack Reacher: Never Go Back in Digital HD/4K from the iTunes store.


Jack Reacher Series Heading to TV  11/15/2018 11:01 AM EDT
Jack Reacher, the Lee Child Book series that has been adapted for the big screen, is now possibly getting a TV adaptation. According to Child, there is already a deal in place for a series.The Reacher films starred Tom Cruise but he won't be involved in the TV version. Child said that they will find an actor who fits the description of Jack Reacher in the novels - someone much larger and brutish. ...  More>> 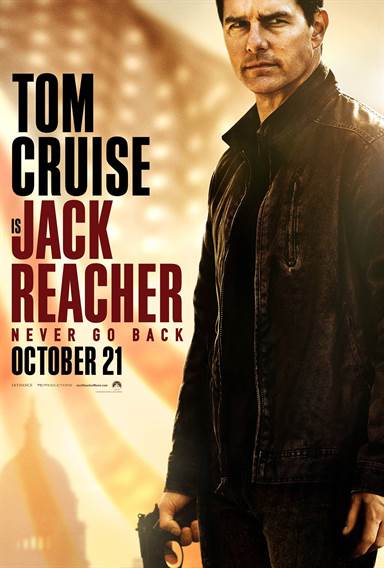 "Reach for the stars" is a common idiom encouraging everyone to try their best, and with this second installment of Jack Reacher's adventures, Director Edward Zwick tried his very best to reach as high as he could- and I think it paid off.  Based on the 18th book in author Lee Child's series, Jack Reacher: Never Go Back follows the 2012 blockbuster hit, which was actually book 10.  The fact that the current movie is obviously not meant to be an exact timeline sequel in the franchise is refreshing, as one does not have to remember exactly what happened in the last movie.  In addition, if you missed the first Jack Reacher movie, you can still slide into your seat and enjoy Never Go Back without any confusion.

We meet Jack Reacher (Tom Cruise: Mission Impossible, Top Gun) just after he's taken out several men in what is probably a fist fight.  Sitting alone, at a counter, in a diner, and as he's placed in handcuffs by the Sheriff, Reacher makes some ominous predictions, including that a phone will ring.  As the phone rings, you can hear the audience laughing at what appears to be the usual Tom Cruise sarcastic humor present in almost of his movies and characters.   While many might find this repetitive, I found it familiar and light, bringing me into the Tom Cruise character, knowing that this is definitely not going to be a "chick flick", but also knowing that there will be moments of the movie that will have humor within them.

Jack Reacher is still helping his M.P. 110th Division in D.C. catch the bad guys, only this time, the Major in charge of his former colleagues is in trouble.  Accused of treason and arrested by the Army, Major Susan Turner (Cobie Smulders:  How I Met Your Mother, Avengers, Captain America: The Winter Soldier) escapes a maximum security military prison with the not-so-kosher assistance of Reacher.  With both of their lives endangered by ParaSource, a military contractor, Reacher and Turner go on the run, and on the defensive, to catch and eliminate the bad guys and clear Turner's name.    In the midst of all this, ParaSource finds out that Reacher may have a daughter (Sam, played by Danika Yarosh:  Heroes Reborn, Tar, Angels).  Reacher and Turner grab Sam and take her with them on the run.

There is cohesive synergy between the cast.  Cruise, Smulders, and Yarosh make a great threesome- all exploring new aspects of individual relationships that really give the movie depth.  Solid performances are given by supporting actors Madalyn Horcher (Gracepoint), who plays Sgt. Leach and is clearly in Reacher's corner when she goes against the temporary commanding officer, played by Holt McCallany (Sully), as well as Turner's orders in order to help Reacher obtain much needed information.  McCallany plays an unfortunate bad guy who gets caught in the cross fire and he is aptly suited for the role.   As in many movies, there is always the character that starts off on the wrong side and ends up a part hero, and Captain Espin, played by Aldis Hodge (Leverage) is the epitome of this exact character.  Hodge's initial dislike for Reacher is clear and feels right, as does his transition towards the end of the movie.  The actors meld well together on the screen and the characters actions move the movie along.

Screenplay writers Richard Wenk, Edward Zwick, and Marshall Herskovitz created a natural dialogue based upon Lee Child's novel, that flowed.  Jokes were funny but not overpowering.  Sarcasm was pointedly placed.  Admittedly, director Edward Zwick could have moved the action along a bit- some of the fight scenes seemed overplayed and unrealistic- even for Jack Reacher, although, you will sit on the edge of your seat wondering "Will this be the end of Jack Reacher?"

Overall, unlike a usual Tom Cruise movie, instead of a love interest, we see Cruise cast as a much more emotionally raw character, having to deal with the possibility of being a father and dealing with the responsibilities that comes with that new role.  This brings a new and refreshing flavor to a Cruise  movie which  is quite a pleasant surprise to watch.

More meaty and more emotional than its 2012 predecessor, but a bit more slow moving and overplayed in the action scenes, Jack Reacher:  Never Go Back is a movie worth seeing. 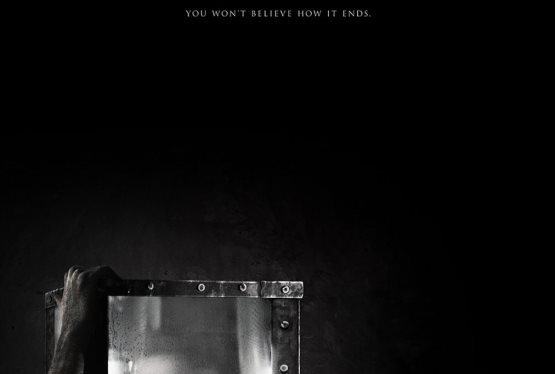