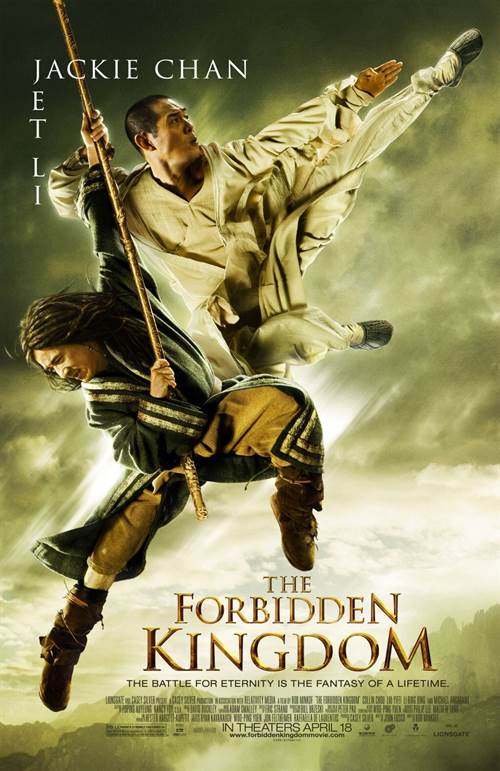 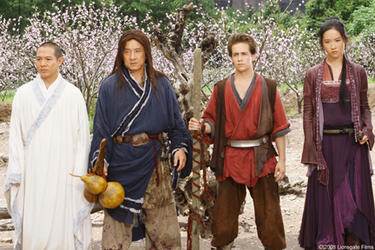 Jason (Michael Angarano), an American teenager, is a huge fan of Hong Kong cinema and old kung-fu movies. While browsing in a Chinatown pawn shop, he discovers the stick weapon of an ancient Chinese sage and warrior, the Monkey King. The magic relic transports Jason back in time, where he joins a band of legendary martial-artists on a quest to free the imprisoned man.

Stream The Forbidden Kingdom in Digital HD/4K from the AppleTV store.

The Forbidden Kingdom images are © Lionsgate. All Rights Reserved. 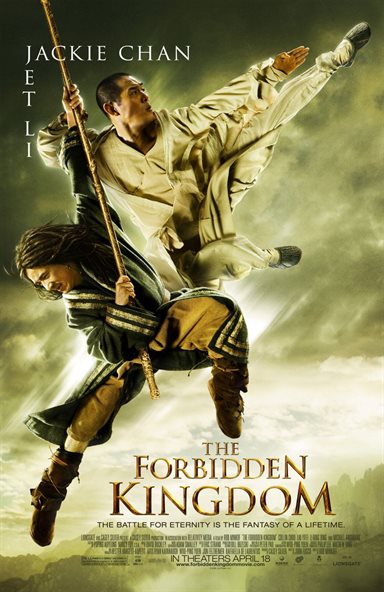 You'd expect the first collaboration between Jet Li and Jackie Chan to be something special: together they're about as close as we come to a cultural icon on the scale of Bruce Lee. Indeed, filmed partially on location (the Gobi desert, not the temple of the heavens, alas) the film looks like a million bucks. Or, well, closer to 55-million--to be more precise.

It's a wuxia adventure wherein a white boy from Boston (played gamely by Michael Angarano) is sucked into mythic China on a quest to return a staff to the imprisoned Monkey King and restore balance to the middle kingdom. Along the way he acquires two teachers (played by J & J): a traveling, drunken Taoist monk and a wandering Buddhist monk with more of a sense of humor than you'd expect (there's also a deadly young lady who speaks in 3rd person).

The kid has "no kung fu" so he must learn it on the journey--and the journey takes them to the palace of the Jade Warlord. This being Wuxia, the characters can "run up the air," battle entire armies at once, and in some cases use "Chi Magic." Using CGI and people suspended on wires, the film shows us fantasy kung fu action with sufficient style and smoothness (and maybe a little innovation).

So is it good? Well, let's get a few things out of the way.

For starters, all the characters come from previous fictions or mythology. They aren't just "ripping off" the white-haired witch or Golden Sparrow (a Shah Brother's character): those people are actually supposed to be those characters. Maybe it's homage (maybe it is a rip-off--but when the film actually references the movies and the brothers by name, I'm inclined to cut it some slack).

Secondly, the "white boy" at the center of the narrative is, yes, a Hollywood friendly westerner--and there's only a couple of saving graces here. The first is that the story on which it is based (loosely--maybe) involves a traveler to a strange land. In the original case a monk traveling to India--but still.

Secondly, the movie--for being Hollywood friendly--gets a few things more or less right. A character who makes a decision pays for it. The kid, although trained by two masters, does not become the kind of fighter that the others, who have been training for years are. They don't use special effects to make Michael Angarano fight like either venerable martial arts movie star. That's a good thing.

Finally, the pacing is good. The movie hits a lot of the set-pieces well. It introduces villains nicely (seeing the witch use her whip for the first time is interesting and exciting. Seeing the terror in the eyes of the Jade Warlord's unwilling consort is more meaningful than him dispatching a servant who interrupted him with bad news). The fights, as I said, done by veteran Yuen Woo-ping are kinetic and inventive.

If the movie does fall down it's that despite having the two greatest marital arts leads in the modern world, being filmed with sufficient budget and with good locations and cinematography, and being brave enough to give us at least a taste of Asian story-telling (unlike the far-more-grim Crouching Tiger Hidden Dragon) it doesn't do anything truly spectacular.

It's good though. I enjoyed myself. Clearly the actors are having fun and that, sometimes, shows through strongly enough to carry the show.