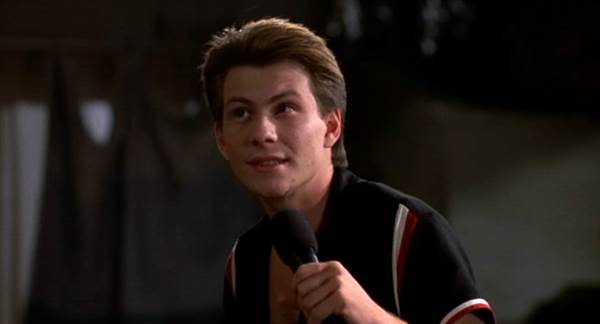 Teenage angst finds a new voice in this drama. By day, Mark Hunter (Christian Slater) is a quiet, studious student at an ordinary suburban high school in Arizona. But at night, Mark creeps down into his basement, fires up his pirate radio transmitter, and broadcasts to the community as Hard Harry, a sexually obsessed social commentator who passes along angry philosophy about the state of teenage life when not blasting punk rock or gangsta rap cuts. Hard Harry's sworn nemesis is high school principal Mrs. Cresswood (Annie Ross), who keeps SAT scores up at the expense of her students' dignity and individuality by eliminating "troublemakers" from the student body. Hard Harry's broadcasts, however, have become a rallying point for the school's misfit underclass, and Mrs. Cresswood is determined to track down the mystery student and bring him to justice (broadcasting without a license, he's not merely an annoyance, but a criminal). The war against Hard Harry intensifies when he broadcasts data from confidential school board reports; Mark's father is a school commissioner, but he has no idea what his son is doing in the basement. Meanwhile, Mark gains the attentions of Nora (Samantha Mathis), who has figured out who he becomes at night. More serious and intelligent than the average teen film, Pump Up the Volume was written and directed by Allan Moyle, who previously dealt with disaffected, music-obsessed teens in Times Square and would return to them with Empire Records.

Purchase DVD/Blu-ray/4K UHD physical copy of Pump up The Volume today at Amazon.com

Pump up The Volume images are © New Line Cinema. All Rights Reserved.