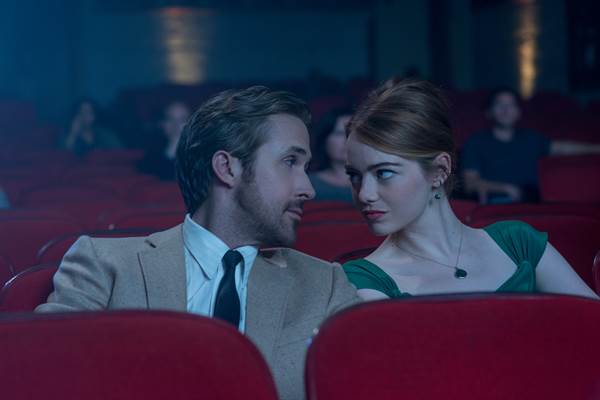 Written and directed by Academy Award® nominee Damien Chazelle, LA LA LAND tells the story of Mia [Emma Stone], an aspiring actress, and Sebastian [Ryan Gosling], a dedicated jazz musician, who are struggling to make ends meet in a city known for crushing hopes and breaking hearts. Set in modern day Los Angeles, this original musical about everyday life explores the joy and pain of pursuing your dreams.

Listen to the La La Land soundtrack on Apple Music.


La La Land Dominates Oscar Nominations with a Record-Tying 14  1/24/2017 10:52 AM EDT
La La Land, which stars Ryan Gosling and Emma Stone, has picked up a record tying amount of 14 Academy Award nominations. The only other films to receive this amount were Titanic and All About Eve.The film's nominations include Best Picture, Best Director, Best Original Screenplay, Best Actor and Best Actress. Other films that topped out the nominations were Arrival and Moonlight. Both of those fi...  More>> 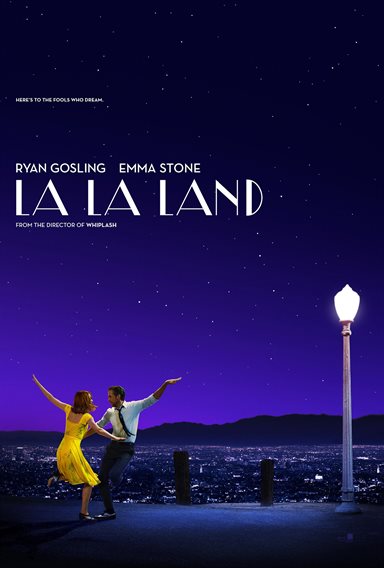 In the golden age of Hollywood movie studios, elaborate movie musicals were part of the culture.  Stars like Gene Kelly, Fred Astaire, and Ginger Rogers were household names and their dancing and singing abilities were well known.  Gone are the days of stars singing and dancing into our hearts in big budget pictures but writer Director Damien Chazelle (Whiplash) has decided to bring his version to the screen this month with La La Land.

Mia (Emma Stone; Easy A) is an aspiring actress working as a barista in the movie studio coffee shop.   Sebastian (Ryan Gosling; Crazy, Stupid, Love) is a piano player with hopes to open his own Jazz club and bring back a dying genre.  The first time they meet, the results are less than stellar; however, they keep bumping into each other and eventually their attraction grows.

However, as with many movie romances, things start to unravel when expectations change.  Sebastian decides to take a well-paying job in a progressive Jazz band that is rising to a level of success that demands more and more of his time. Mia quits her barista job to write and star in her one woman show that is a flop.  As stress and pressure seep into their daily lives, they begin to blame each other for the shift in their feelings.

With a grand opening sequence, set on the highway no less, Chazelle sets the tone of this somewhat upbeat spectacle.   Throughout the film, he draws the audience in with either catchy musical numbers choreographed by Mandy Moore (So You Think You Can Dance) or with sweeping camera shots that make us feel as though we are a part of the film itself.

The music by Justin Hurwitz (Whiplash) is both happy and haunting and certainly memorable, which is always important for a good movie musical.  This is a soundtrack that resonates and will make you want to go out and buy it immediately so you can play it over and over again. The catchy tunes take up residence in your brain and refuses to leave, forcing you to play it over and over again in your mind.

Stone is magnificent and makes us invest in her journey from unknown coffee shop girl to successful Hollywood star.  She and Gosling have great chemistry that makes you want to root for them as a couple.  Gosling himself is impressive and the year he spent learning to play the piano was well worth it, as he seems like a master with years of experience.  Unfortunately for me, there is something about him that simply rubs me the wrong way and I never find him overly appealing.  He always comes across as smug and conceited and while those qualities are apt for this character, I can't help move past the fact that I just find him annoying… always.

The film goes in a direction the audience wouldn't necessarily expect and the ending is not your usual "happily ever after" tale.  While this scenario is refreshing, it's also a little bittersweet and probably one of the many things that makes the movie so memorable.  Despite the ending though, you will walk out of the theater feeling good and upbeat and humming the tunes.

I also love the fact that La La Land will probably give Disney and Moana a run for their money in the best soundtrack category at the Oscars this year.  The music is THAT good!

While the movie is "tongue in cheek" and may not completely live up to the movie musical grandeur of olden days, it is, nonetheless, an uplifting, fun film and perfect for a family outing during the holiday season.