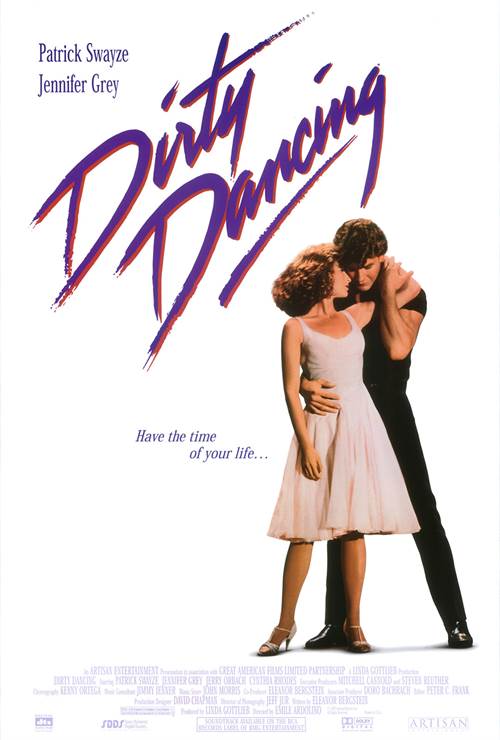 The summer of 1963 innocent 17-year-old Baby (Jennifer Grey) vacations with her parents at a Catskill's resort. One evening she is drawn to the staff quarters by stirring music. There she meets Johnny (Patrick Swayze), the hotel dance instructor, who is as experienced as Baby is naive. Baby soon becomes Johnny's pupil in dance and love.

Stream Dirty Dancing in Digital HD/4K from the AppleTV store.

Listen to the Dirty Dancing soundtrack on Apple Music. 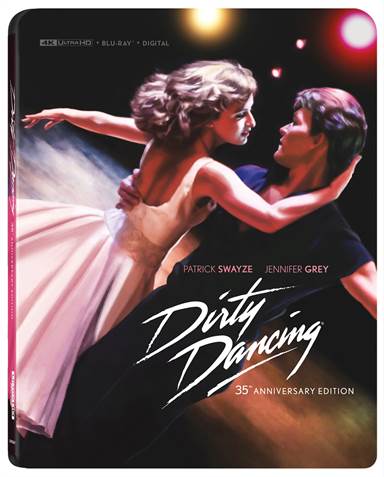 If you were a teenager living around the New York City area in the 1950s and 60’s chances are you may have gone to the Catskill Mountains on vacation and stayed at a resort like the fictitious Kellerman’s.  If you were a teenager in the latter part of the 1980s, chances are you may have been swept up in the phenomenon that surrounded the movie, Dirty Dancing.  Whichever group you fall into, you undoubtedly have wonderful memories from your experience.  Falling into the second group myself, I have always loved Dirty Dancing and I was excited to learn, in honor of the thirty-fifth anniversary of the movie’s release, that it was being released in 4K.

It was the summer of 1963. The Houseman’s were spending a few weeks at Kellerman’s Resort in the Catskill Mountains. Francis “Baby” Houseman (Jennifer Grey; Ferris Bueller’s Day Off) was planning to relax before heading off to college.  However, what she got was an education, a first love, and an eye-opening experience that made her blossom from a girl to a woman. Johnny Castle (Patrick Swayze; Roadhouse) is one of the dance professionals at Kellerman’s, there to “entertain” the resort guests.  Street smart, good-looking, and living with a chip on his shoulder, he could never have imagined that the summer he met Baby she would change his whole perspective on the world.

Although made on a shoestring budget, Dirty Dancing managed to employ a group of talented actors and dancers elevating it a level above a simple coming-of-age romance story.  Besides Swayze and Grey, the cast included Jerry Orbach (Law & Order), Cynthia Rhodes (Flashdance), and Kelly Bishop (Gilmore Girls).  Rhodes does an excellent job, as do Orbach and Bishop but the two main stars share scenes that are brilliant and moments that are mediocre.

This 4K version (a new steel book 4K was released in June) has the same video quality as a previously released 4K.  The 2160p resolution offers a ton of details, including the loose strands of Baby’s hair when she and Johnny are dancing in his cabin.  The iconic soundtrack benefits from the Dolby Atmos audio as the music (always so important in a dance film) brings depth and life to each scene.  The ambient noise, from crickets chirping to dishes clanging, surrounds the viewer, submerging them in the layers of sound the film has to offer.  The Special features don’t include anything new so if you already have the 4K steel book released a few years ago, there is little to entice you to pay for this month’s release.

The dancing, Grey and Swayze, the music, and the memorable “Nobody puts baby in a corner” line is always worthy of a revisit and if you have not previously purchased the 4K disc you can’t go wrong with this latest release.

While Dirty Dancing brings me back to my high school days, I now watch it with a new perspective that dampens a little bit of the “magic” I remember.  However, I still watch it and love it and feel it is a film that deserves a new release every few years.

Patrick Swayze: In His Own Words

Eleanor Bergstein: Thoughts on a Lifetime of Dirty Dancing

The Rhythm of the Dancing

(I’ve Had) The Time Of My Life