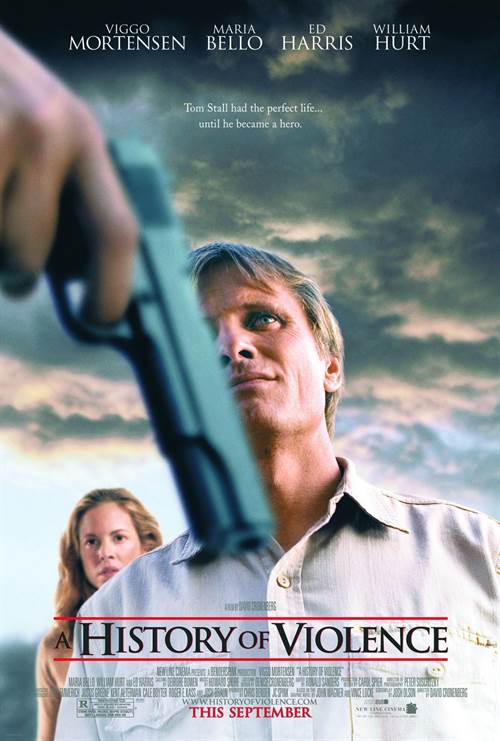 A History of Violence Synopsis 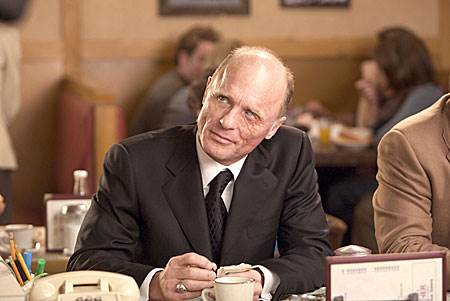 A stylized thriller from director David Cronenberg, A History of Violence examines how far a man is willing to go in his quest for redemption and to protect his family. Viggo Mortensen stars as Tom, a man who leads a quiet, charmed life with his loving wife and family in a small town. But when an unexpected incident turns bloody and brings unwanted attention to him, Tom is forced to return to his secret past in order to rescue his family from peril.

Purchase DVD/Blu-ray/4K UHD physical copy of A History of Violence today at Amazon.com

Download A History of Violence in Digital HD/4K from the iTunes store.

A History of Violence images are © New Line Cinema. All Rights Reserved.

A History of Violence Blu-ray Review 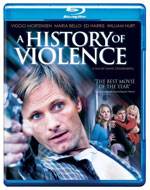 Introduction:
"A History Of Violence" from director David Cronenberg begins not far from where it ends. A disjointed yet unique take on a crime drama, the film is a worthy effort, yet fails to tie its many story lines into a cohesive whole. From the outset the tone is decidedly dark with murder being second nature and seemingly a part of everyday life for ruthless thugs who kill innocent children despite being "tired of" their lifestyle. We are introduced to family man and owner of the "American dream" Tom Stall, whose simple life as owner of a diner with a wife and two kids becomes entwined in matters that are removed from his present reality yet might just be part of his secret past.

Plot:
After thwarting a robbery attempt on his diner by heroically (and far too competently) killing the would be criminals, Tom becomes a local hero whose face is all over the evening news and morning papers. This leads to a boom in his business and a few unwelcome guests who insist that Tom  is not who he says he is. Referring to him as "Joey" from Philadelphia a few out of town diner patrons led by Carl Fogarty (Ed Harris) begin following Tom and his family insisting that he come with them to resolve some unfinished business.

His family being his main motivator, Tom denies any knowledge of "Joey" or a life in Philadelphia. Yet when finally confronted between the choice between the life of his son and admitting the truth, Tom reveals his true identity of a stone cold Mob killer by taking out those who came to take him in. Tom/Joey then goes out to find his brother who is at the top of an east coast organized crime syndicate to finally erase his past and return back to his "normal" life with his wife and family.

Much of the focus of the film is on the interpersonal relationships between Tom and his family. His wife, Edie, (a captivating Maria Bello) is very much in love with Tom and a great mother. She becomes upset with Tom for lying to her about his past, yet still accepts him as "Joey" and even finds it momentarily romantic in a passionate scene. His son Jack, is a typical American teenager who is thrust into a darker world by killing his fathers would be assassin at point blank range while not fully understanding who his father really is. Both distance themselves from Joey for putting them in such troublesome situations and the family dynamic that was so strong in the beginning is ripped apart by the end.   In the final scene, the family is reunited yet it is left up to the viewer to decide what the future holds.

There are 4 or 5 story lines that never really mesh with each other or serve to advance the story. From the sons troubles with a bully at school to Joey going back to take on his brother, there is little time to establish any motivation for the characters and the story as a whole suffers. Characters are disposed of as quickly as they are introduced and the only constant is Tom/Joey who himself is a mystery until the end where nothing is really resolved.

Blu-ray:
The Dolby Digital audio on the Bluray is superb. In the opening scene the viewer is immersed in the sensation of being in the scene with outdoor sounds surrounding the dialog of the characters. While the score is not memorable, the sound effect production is crisp and vibrant with each gunshot resonating through all 5 surround speakers.

The picture is crystal clear at 1080p and while the film is not one that necessarily benefits from the enhanced definition of blu-ray , individual strands of hair and the glistening of spattered blood are evident throughout some of the films most violent close up scenes.

Other disc features include commentary by director David Cronenberg, 3 mini featurettes (including an interesting "Too Commercial for Cannes") and a deleted scene. While these bonus features are a nice touch, they are not presented in 1080p and only are available in 480i or 480p standard definition. With all the hype surrounding the storage capabilities of the blue ray medium ,a savvy consumer should demand high definition video throughout their Blu-Ray experience.

One other production note that is definitely lacking is the graphics pressed on to the blu-ray itself. Seemingly slapped together at the last second, the image on the disc is out of focus, the resolution is not suitable for print quality (it looks to be pressed at about 72 dpi) and for a film that looks so good in high def you wonder who dropped the ball on the disc itself.

Despite some small nagging flaws in the packaging and bonus feature production you will not want to see the film any other way!

Overall:
A decent effort, though the subplots really drag this one down. At the end there was no real resolution besides a return to normalcy. If nothing is learned by the characters , and they continue  about their ways without change, what can you take away form the film? Its left to you to decide. As quickly as Tom sheds his persona of Joey, you can Flick this one aside. 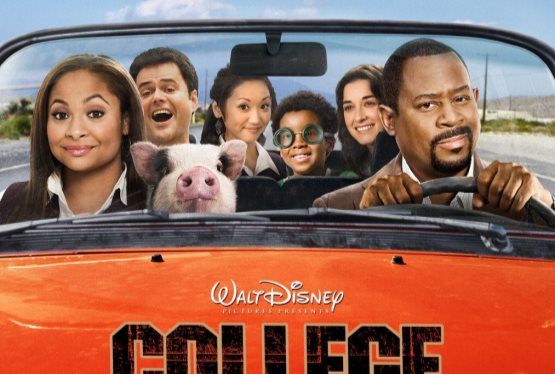 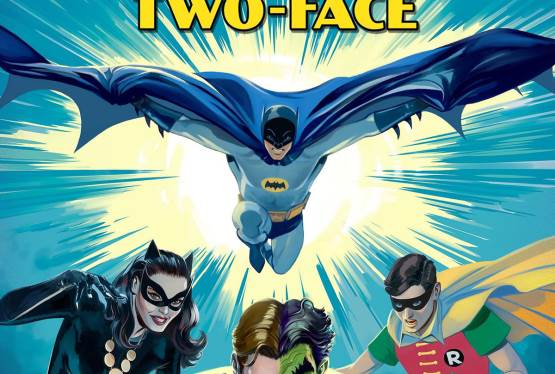