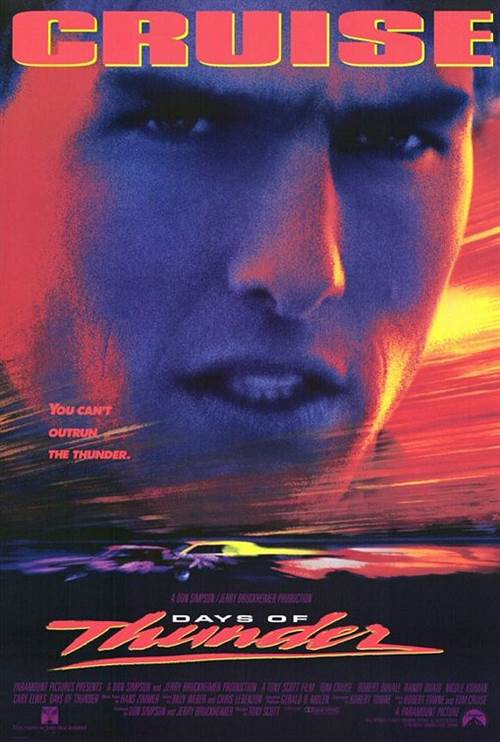 Tom Cruise plays race driver Cole Trickle, whose talent and ambition are surpassed only by his burning need to win. Discovered by businessman Tim Daland (Randy Quaid), Cole is teamed with legendary crew chief and car-builder Harry Hogge (Academy Award. winner Robert Duvall) to race for the Winston Cup at the Daytona 500. A fiery crash nearly ends Cole's career and he must turn to a beautiful doctor (Nicole Kidman) to regain his nerve and the true courage needed to race, to win and to live.

Stream Days of Thunder in Digital HD/4K from the AppleTV store.

Days of Thunder images are © Paramount Pictures. All Rights Reserved. 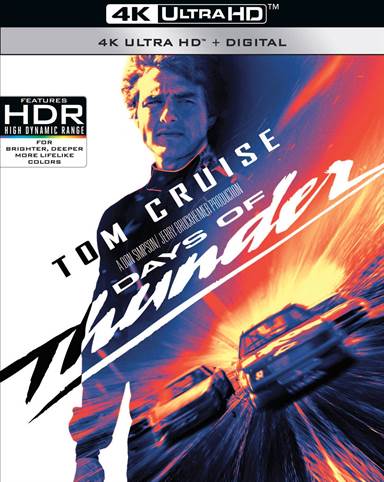 Tom Cruise (War of The Worlds) is known for his action movies with fast-paced, amazing stunts that, at times, seem death-defying.  After his break out roles in Risky Business and Top Gun, and his terrific performances in more serious movies like Rain Man and Born on the Fourth of July, Cruise decided to join another Don Simpson/Jerry Bruckheimer (Crimson Tide) produced, Tony Scott (Enemy of the State) directed feature film.  Days of Thunder landed in theaters in 1990 and married the action Cruise loves with drama and romance.  This month, in a trifecta of Cruise films, Paramount Pictures is releasing the movie on 4K UHD.

Cole Trickle (Cruise) is a winning open-wheel racer from California who is being recruited by Chevrolet dealership owner Tim Daland (Randy Quaid; National Lampoon's Christmas Vacation) to drive for Daland in the NASCAR Winston Cup Series.  Daland also brings back retired car builder and crew Chief, Harry Hogge (Robert Duvall; Apocalypse Now) who Left NASCAR to avoid an investigation behind the death of another driver.  From the beginning, Hogge realizes working with Trickle is going to be a challenge because Trickle doesn't know much about cars and NASCAR racing.  Hogge decides to mentor Trickle causing him to earn his first win against a dirty driver, Rowdy Burns (Michael Rooker; Guardians of the Galaxy).

As animosity/rivalry between Trickle and Burns grows, they both start taking more and more risks on the track until they collide in Daytona, and both end up in the hospital.  Trickle meets Dr. Claire Lewicki (Nicole Kidman; Moulin Rouge!) with whom he begins a romantic relationship.  Meanwhile, Daland hires a temporary driver until Trickle is cleared to race again but decided instead to field two teams once Trickle is better.  This new rivalry is just as intense as the one with Burns and causes Trickle and Hogge to get fired by Daland after Trickle runs hot (pun intended) and crashes his car into Daland's other driver.  However, when Burns finds out he needs brain surgery, he asks Trickle to drive his car in the Daytona 500.

Cruise always manages to do well enough even with a less than stellar script and little to no character development.  Duvall is a pro and plays the part of Hogge beautifully.  Interestingly, this is the film where Cruise and Kidman supposedly "fell in love" in real life despite having very little on-camera chemistry.  Quaid, Rooker and the rest of the supporting cast work well with Cruise and Duvall.

This 30th anniversary 4K release lives up to the Dolby Vision video quality expectations.  The 2160p resolution brings every detail into sharp focus and showcases the race cars well. The Dolby True HD 5.1 is equally as strong if not better than the video quality.  The racetrack scenes are especially well done as the viewer can hear the cars speeding by during the race.  The only extra included with this combo pack (besides the Digital HD Code) is a 7-minute "filmmaker focus" where Jerry Bruckheimer discusses making the film with the late Tony Scott.

Dubbed "Top Gun with race cars", Days of Thunder lacks the same punch and character development that made audiences emotionally invested in Maverick and Goose.  For race car enthusiasts, this movie is a treat with great action scenes but for the average person, the drama doesn't work quite as well.  Even a terrific cast lead by Cruise and directed by Scott can't seem to salvage this incomplete and inadequate script.

Since Days of Thunder is being released at the same time as Top Gun and War of the Worlds, I would suggest buying the three titles and make it a "Cruise Marathon" quarantine weekend.  Just remember to go into this movie with lower expectations than the other two films.