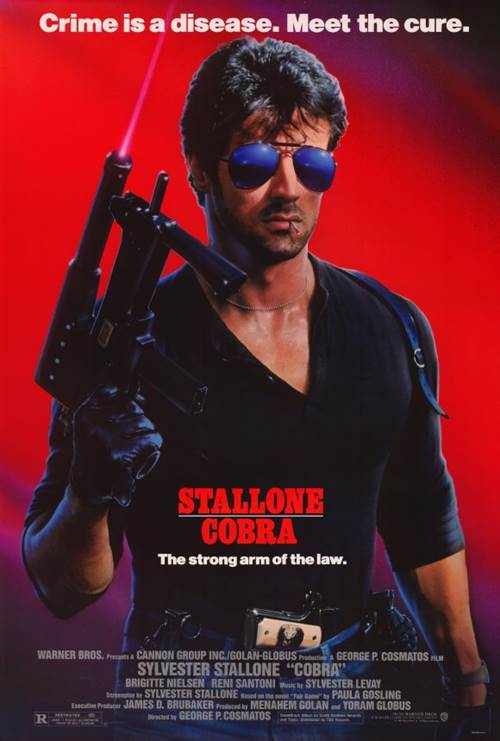 A gang of neo-fascist thugs, led by the self-proclaimed 'Night Slasher', are breaking into people's homes & cars, then killing them at random. When of of these thugs holds up a food store & takes hostages, Lt. Marian Cobretti (Stallone) - an intense, take-no-prisoners cop, is brought onto the scene to end the hostage-taking. Ranting bizarrely about a 'New World', the man levels a sawed-off shotgun at Cobretti, who hits him with a knife, then guns him down when the man refuses to put down his weapon. Later that night, another murder occurs, attributed to the Night Slasher - and the next day, another one. This one is witnessed by a young woman, Ingrid Knutsen (Nielsen). She drives away before the thugs can kill her, but it isn't long before some creepy-looking people start making attempts on her life - and Cobretti's. Cobretti plans to move the only witness to the blood spree upstate, but with inside information, the thugs follow them. And a battle for survival rages between Cobretti and the thugs...

Stream Cobra in Digital HD/4K from the AppleTV store.