Ethan Hawke, Uma Thurman, Alan Arkin and Jude Law star in this engrossing sci-fi thriller about an all-too-human man who dares to defy a system obsessed with genetic perfection. Hawke stars as Vincent, an “In-Valid” who assumes the identity of a member of the genetic elite to pursue his goal of traveling into space with the Gattaca Aerospace Corporation. However, a week before his mission, a murder marks Vincentas a suspect. With a relentless investigator in pursuit and the colleague he has fallen in love with beginning to suspect his deception, Vincent’s dreams steadily unravel.

Download Gattaca in Digital HD/4K from the iTunes store. 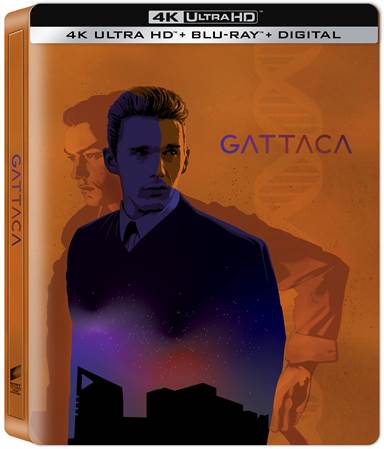 If you could possibly create a biologically perfect child, would you? If there were so many advances in technology that a couple could rule out heart defects, major diseases, etc., and choose eye color, hair color, intelligence, and even the baby's gender, do you think that technology should be utilized?  What if it wasn't 100% foolproof?  What if it meant your child could be discriminated against if they weren't almost "perfect"? What if it put children who were born the old-fashioned way were seen as inferior?  Written and Directed by Andrew Niccol (In Time), the 1997 movie, Gattaca, offers a look into what a future like that might hold.

Vincent (Ethan Hawke; Training Day) was born without generic selection and therefore was considered an in-valid since he had a predisposition to several diseases, and he was supposed to die at the age of thirty.  His parents decided they would use genetic selection for their second child, Anton (Loren Dean; Apollo 13), which inevitably created comparisons and tension between the two brothers.  Swimming competitions, which Anton always won, were one of their many battles.  Always told he would never be anything more than a menial worker, Vincent never accepted his place, and after beating Anton in one of their swimming races, he decided to leave home to pursue his dream of going into outer space.

Vincent then spent the next several years cleaning offices at Gattaca Aerospace Corporation.  After a time he is given the chance to impersonate a "valid" named Jerome Morrow (Jude Law; Captain Marvel) who was paralyzed in a car accident.  Using Jerome's hair, skin, blood, and urine samples, Vincent continues to pass the required DNA tests until the day his supervisor is killed. When investigators find an eyelash of Vincent's, he suddenly becomes the main suspect. Throughout this time, Vincent falls in love with his colleague Irene (Uma Thurman; Pulp Fiction), a valid who is herself "imperfect.

Gattaca boasts an excellent cast full of talented actors.  Besides Hawke, Thurman, Dean, and Law, other well-known thespians include Tony Shalhoub (Monk), Gore Vidal (With Honors), Ernest Borgnine (Escape From New York), and Alan Arkin (Grosse Pointe Blank) to name a few.  Interestingly, the trailer touted "introducing" Jude Law, so Gattaca is seen as his breakthrough role in the United States.  Of course, Hawke and Thurman, who met on the set of Gattaca and later married, had great chemistry that was evident on screen.

Gattaca is being released this week in 4K and the picture contrast between this new version and the original is easily seen.  The 2160p video is sharp and clean, if slightly darker than the original.  There is also a lot less graininess in the updated version.  Gattaca also boasts an eclectic soundtrack upgraded to Dolby Atmos.  The dialogue is crisp but somewhat flat as it doesn't have the ability to take advantage of the surround speakers.  The 4K disc houses the film and a UHD version of the trailer.  The other extras are on the Blu-ray and only include previously released material.  They include: Deleted Scenes, Original Featurettes  -- Welcome to Gattaca, Do Not Alter, and Substance Test Outtake.

Sadly, Gattaca's themes and message are still relevant twenty-three years later.  Discrimination, the "haves" vs. the "have-nots", and Government control are still current issues, worldwide – not just in our country.  Niccol's story highlights the disparities in a way that many will recognize today.  The script could have used a little polishing, but the film keeps the audience engaged the entire time.

If you are a Sci-Fi fan, this is one film you should consider owning, especially now that it is in 4K.