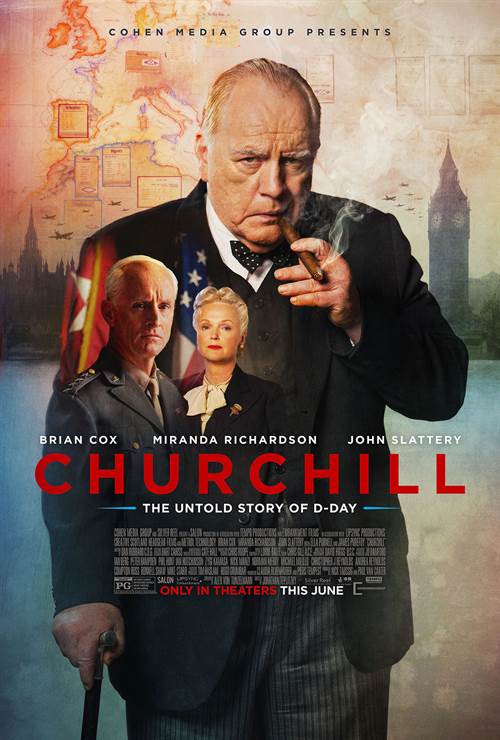 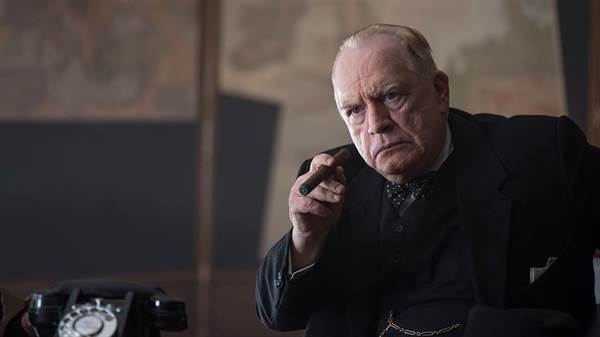 Tensions mount for the beleaguered British Prime Minister Winston Churchill (Brian Cox) in the days leading up to infamous Allied D-Day landings in Normandy, France in June, 1944. Fearful of repeating his deadly mistakes from World War I in the Battle of Gallipoli, exhausted by years of war, plagued by depression and obsessed with his historical destiny, Churchill is reluctant to embark on the large-scale campaign, one that the entire war effort hinges upon. Clashing with his Allied political opponents U.S. General Dwight D. Eisenhower (John Slattery) and British Field Marshal Bernard Law Montgomery (Julian Wadham), the troubled Churchill receives support and devotion from his wife, the brilliant and unflappable Clementine Churchill (Miranda Richardson). With her strength and shrewdness, “Clemmie” halts Winston’s physical, mental spiritual collapse and inspires him on to greatness.

Download Churchill in Digital HD/4K from the iTunes store.

Listen to the Churchill soundtrack on Apple Music.


Alex von Tunselmann's Churchill Takes a More Intimate Look At Gr...  6/2/2017 10:17 AM EST
"He suffered from some sort of depression… In those days there was no formal name for it but he called it his ‘black dog'" stated Alex von Tunselmann about Sir Winston Churchill.  She further described him as an alcoholic and eccentric which is part of what drew her to write about the specific time in his life, ultimately leading to her first feature film credit for Churchill. "I wanted to explore...  More>> 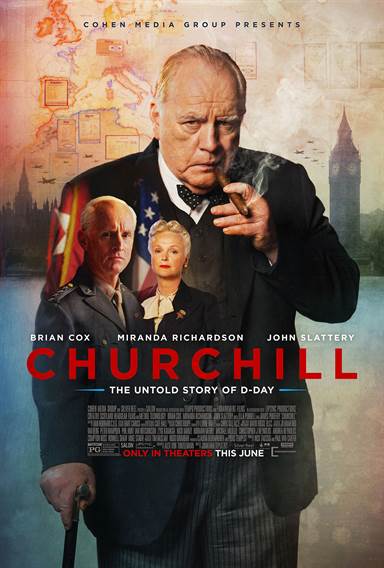 There have been numerous books and movies about Sir Winston Leonard Spencer-Churchill over the years and in a 2002 poll, he was named the greatest Briton of all time.  He led the United Kingdom through some tumultuous times and was always seen as a great statesman.  However, behind the scenes, he wasn't necessarily as eloquent sometimes, especially when he felt strongly opposed to an idea.  This was very evident leading up to D-Day in World War II and Cohen Media Group has decided to showcase this minute time in his political career in their new film, Churchill.

Four days before troops landed on the shores of France at Normandy, Churchill (Brian Cox, Troy) met with Allied troop leaders and the King (James Purefoy; The Following) in order to redirect their efforts and planning of Operation Overlord.  His fear, based on previous experience in World War I, was that thousands of young men would lose their lives and yet the campaign would not be successful.  He met with Eisenhower (John Slattery; Mad Men) and spoke to King George to no avail, all the while personally unraveling before everyone's eyes.  He plotted and planned to try and change the course of the attack but was shut down at every turn.

By his side during his "breakdown" was his wife, Clementine "Clemmie" Churchill (Miranda Richardson; The Hours).  While charged with the exhausting job of keeping Winston on task and call him to task when he was out of line, she does so with the grace and calmness one would expect of a 1940's British housewife.  Also trying to keep Churchill in check is Smuts (Richard Durden; From Paris With Love), the military man assigned as Churchill's right-hand man who fairs less well than Clementine with keeping The Prime Minister appeased.  Finally, we meet the young secretary, Helen (Ella Purnell, Miss Peregrine's Home for Peculiar Children), in awe of the great man and is intimidated and fearful of her employer, yet forcefully puts him in his place when the situation calls for it.

While the pacing is somewhat slow, especially in the beginning, Director Jonathan Teplitzky (The Railway Man) has a way of using the silences between the dialogue to engage the audience in a contemplative Churchill and his thoughts.  Teplitzky also gives the audience a study in juxtaposition, as he shoots extreme profile close-ups of an introspective Churchill along with long, wide far away shots of the man as he stares out into the ocean on a gloomy afternoon.

Cox is well suited to playing this character and though he is not the first, nor maybe the best, he does well to portray the iconic, beloved man during a time of supreme angst and sorrow in his life.  Richardson is commanding onscreen with Cox and carries an almost regal air.  Her quiet demeanor belies a forceful strength one can only assume was necessary when dealing with one of the most powerful men in Britain.  Slattery is commanding and his time on screen certainly doesn't go unnoticed.

For those unfamiliar with Churchill, this portrait is one of a brilliant, if not unhinged, the man feeling the power and glory days of his past slipping from his grasp.  The view of these crucial four days as he tries to warn others of his past mistakes is haunting and evokes a sense of pity from the audience, warranted or otherwise.  It is a different Churchill than what we are used to seeing and, therefore, somewhat unique and original.

As dramas go, one could do much worse and it is worth a gander.