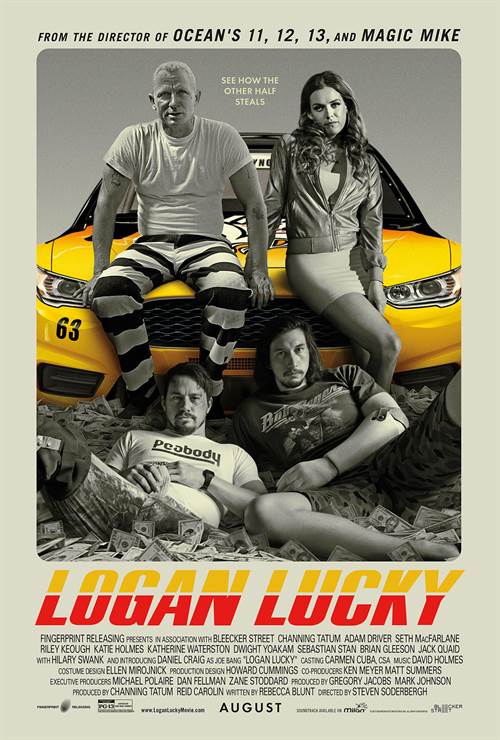 Stream Logan Lucky in Digital HD/4K from the AppleTV store.


Win a Copy of Logan Lucky on Blu-ray From FlickDirect and Universal  11/17/2017 7:26 PM EST
One of the most talked about films this summer was Logan Lucky.  A smart comedy with an all-star cast it earned critical acclaim and audience appreciation.  As Universal Pictures Home Entertainment gets ready to release it on 4K UHD, Blu-ray, and DVD they, along with FlickDirect want to give away a Blu-ray Combo pack version of the film.To enter simply subscribe to the FlickDirect YouTube channel ...  More>> 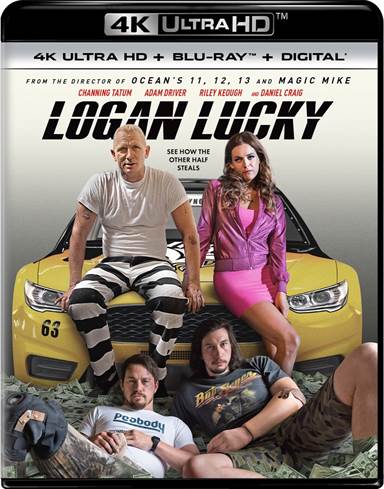 Ever wanted to pull off the perfect heist?  Ever have the opportunity and think you could plan a way to steal millions of dollars? What if that plan included breaking someone out of prison for less than 12 hours and sneaking them back in before the prison guards noticed they were gone?  For Jimmy Logan (Channing Tatum; Magic Mike) that is exactly what he plans to do.  Not only is it interesting to see how he can manage to do it but how he breaks the "Logan Family Curse" in the process...or does he?

Jimmy is a former high school football star who works in construction after he blew out his knee and walks with a limp now.  His life is centered around his daughter and how he can provide for her.  His brother Clyde (Adam Driver; Star Wars: The Force Awakens) was a soldier who lost his arm while fighting for our Country.  Clyde owns a local bar and believes that the Logan family is incredibly unlucky and cursed.  When Jimmy loses his job helping to fill the sinkholes under the international car racing speedway he formulates a plan based on what he found underground.  However, his plan requires the help of other people, which is where the real fun begins.

Joe Bang (Daniel Craig; Quantum of Solace) is a known bank robber and explosives guy serving time behind bars.  Jimmy and Clyde devise a plan to break him out of jail and give him a cut of the earnings.  The planning and precision required to get the job done is impressive and somehow manages to go off with barely a hitch.  Interestingly, mere hours after the money is taken most of it is recovered in an abandoned pick up truck.  This little twist adds an interesting development to the story.

Tatum does really well in this role, which is a departure from what we normally see him do.  His character is brooding and dark and certainly a far cry from his half-naked gyrating exotic male dancer part.  Driver is simply ok but it's difficult to believe that he and Tatum are actually brothers.  Craig is great as this hillbilly yet intelligent criminal.  This role is unlike anything we have seen him play before as it was less serious and certainly less refined from his James Bond hero.

The 4K UHD Blu-ray is presented in 2160p high definition video and one can definitely tell.  There is a sharpness and clarity to the scenes with plenty of minute details to enhance the viewer's enjoyment.  The DTS Master audio 5.1 is pretty standard but the quality doesn't really stand out in any way either good or bad.  The soundtrack has some terrific music to accent the action and dialogue and the music and effects are spread evenly across all channels while the dialogue is relegated to the center speaker.

Probably the most disappointing thing about this combo pack is the features, or the lack thereof.  Besides the 4K Blu-ray, there is also a standard Blu-ray and an UltraViolet digital download.  Otherwise, the only other feature is two deleted scenes, Pro/Con and Tap Dancing, totaling just under four minutes of screen time, that can be found on the standard Blu-ray.

As a Steven Soderbergh (Sex, Lies, and Videotape) property, it's fairly standard fare with a good script, great casting, and a hyper-intensified stylized feel.  However, we have seen heist movies before and this one doesn't stray far from the tried and true formula.  The plot has a few holes but nothing so glaring that it makes the viewer audibly groan and roll their eyes at the screen.

A decent enough movie, Craig is certainly one of the highlights.